Woman born with no limbs dedicated her life to raising her son alone, but couldn’t watch him succeed - Daily Net 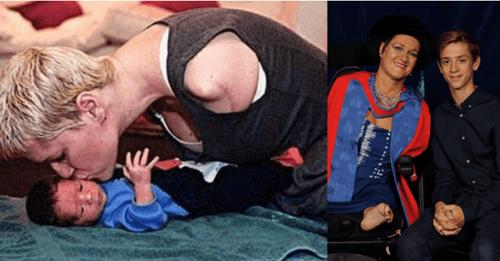 Woman born with no limbs dedicated her life to raising her son alone, but couldn’t watch him succeed

When she was a child, she used to be b*ul*lied for her differences but she did not let that turn her bitter. She loved her son so much before destiny took him away from her.

Alison Lapper who was born with phocomelia, a condition due to which she did not have limbs and a red mark on her face. Doctors believed she would not be able to make it too far or she would have to overcome great difficulty and stig*ma throughout her life. At the age of just seven weeks, Lapper was snatched from her mother and sent to a children’s home. Her mother believed that it was better if the state took care of her.

According to Lapper, whose hand, and legs are abbreviated limbs had a tough childhood growing up with a disability, the staffers of the children’s home called them “strange little creatures.” But she was brave and grew up to become an artist.

Lapper had achieved massive success. Despite her achievements, Lapper has a dream to become a mother. Although at first it wasn’t easy, she did manage to become pregnant. However, Lapper faced hurdles here, too.

Lapper’s pregnancy was not without challenges when she had to go through multiple mis*carriages after conceiving, until she could finally carry her baby to full term. She told: “I had been pregnant in my 20s, had miscarried four times and had always assumed that becoming a mother was not a possibility for me. But when I became pregnant again in April 1999 I knew I wasn’t going to miscarry. I was very fit and healthy and everything in my body and brain felt right,”.

Lapper came into limelight after she posed na*ked while eight months pregnant for a Marc Quinn statue, which stood in Trafalgar Square for two years.

Regardless of the heartbreak, the birth of her son named Parys had changed her life. She said: “He was healthy, he was cute, he was a blessed miracle,”

Nothing made her happier than when she first saw him. Mail Online quoted her: “When I saw him, I just cried and cried,”
“The emotions I felt were indescribable. I had never imagined I was going to be a mother, never thought it could be possible. But when they placed him on my shoulder and I gave him a little kiss on his head and said ‘hello’, I was overwhelmed.”

Back then, she didn’t know that she will have bid adieu to him before she could watch him succeed.

She had said when Parys was five years old: “My disability hasn’t ever created a barrier between us, but if the children at school tease him or make negative comments about his mother he may find it hard to deal with,”
“…we’ve been through a lot together. I am the only person who has been constantly in his life since he was born.” 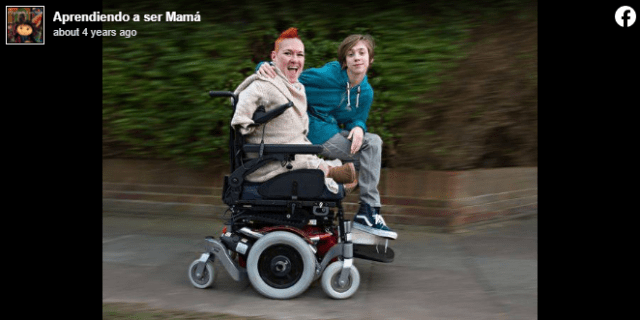 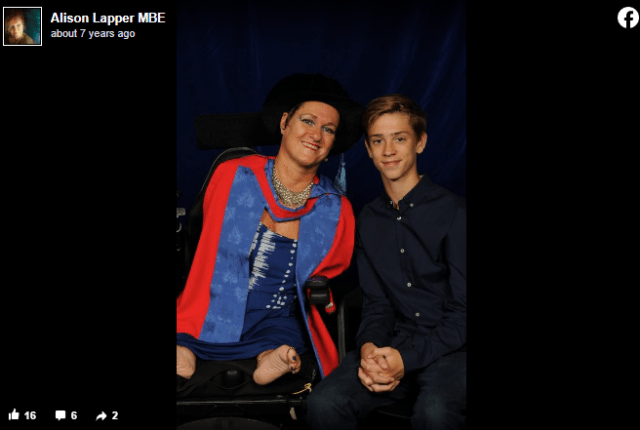 But this happiness too was to be snatched away from her soon when Parys Lapper, 19, left her forever due to a supposed over*do*se and this left his mother, distraught. The boy was found in a hotel room in July 2019. “Alison Lapper spent eight hours beside him, crying, hugging him and kissing his hair,”
Lapper once called Parys “the greatest piece of artwork.” Now that she had to lay her son to rest, one can only imagine the pain that she must have gone through.

Gas attendant paid for Woman’s fuel, is rewarded with 8…