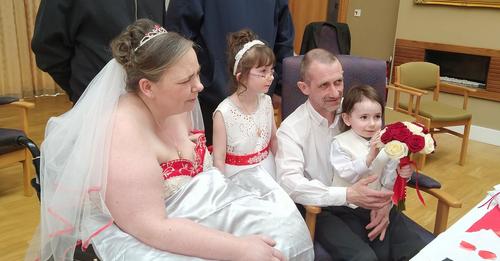 A brave mum lost her fight with cancer just three days after marrying her soulmate.

The new bride, from Blanchardstown in Dublin, had beaten breast cancer a few years before the ceremony, which was held last month. But a devastating MRI scan on New Year’s Day revealed a 10-and-a-half inch tumour in her chest.

The couple shared just three days of marriage before Grainne passed away at a hospice on April 1, reports the Irish Mirror. 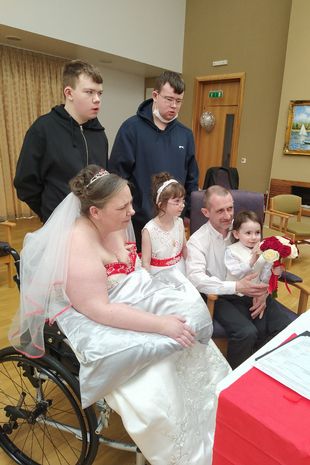 Now her mother Lorraine Sherlock believes that if Grainne had received the MRI scan earlier, she may have been eligible for treatment to allow her more time with her four children and new husband.

Grainne and Paul on their wedding day with her children Corey, 14, Declan, 16, Kaiden, three, and Hannah, six

She said: “She got married on the Tuesday before she died in the hospice to Paul with her four children around her. She was a bride for three days before she died.

“She said to me before she passed that she didn’t want to leave her kids and I know that. She was a great mammy and they are sobbing constantly now, looking for their mammy.”

Grainne first complained of arm pain around eight months ago and was attending regular check-ups in Beaumont Hospital.

The mum-of-four was also visually impaired but never let her eyesight defect deter her from living a full life.

Grainne pictured at her wedding with Kaiden, Hannah, and her sister Marese as bridesmaid

Lorraine said: “Grainne had breast cancer in 2019 and had a lump removed from her right breast. She finished her treatment in May 2020 and was going back to Beaumont for check-ups.

“Last year, she was going back and forwards to the hospital with a pain in her right arm but was given painkillers and told it was nerve damage as a side effect from the chemotherapy she had. 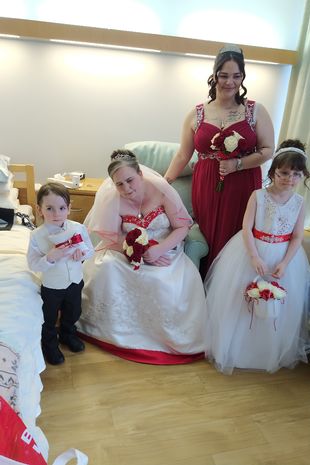 “The pain got so bad, she was crying constantly and she actually lost the power in her arm, but an MRI scan scheduled for October was cancelled as they said the number of her chemotherapy port wasn’t included in her referral letter.

“Eventually when she got to a stage where her arm had swollen and she couldn’t move with the pain, she was sent for a scan on January 1 and told on January 7 that there was a 10.5cm inoperable tumour in her chest which was wrapped around the main nerve in her arm.

“There was nothing they could do. It was terminal.”

Grainne was sent to St Francis Hospice for her final weeks but ended up back in hospital when her pain became unbearable.

“She had to wait in ED on a chair in the corner, doubled up in pain for 10 hours before they sent her to oncology. The cancer had spread at that point to her lungs,” Lorraine added.

“She has two teenagers with autism and she has a six-year-old and a three-year-old who I think should’ve had their mammy for longer.

“Maybe she was going to die of cancer anyway but that cancer was growing over the last year. If they carried out an MRI scan earlier when she first complained of a pain in her arm, they may have detected it.

“At that stage, maybe she might have had the option of treatment. She may have had the chance of a little bit more time with her family. But we’ll never know now for sure.”

The family has set up a GoFundMe page to help with funeral costs.

In a statement, Beaumont Hospital said: “The hospital does not comment on individual cases.

“If the family would like to contact the hospital directly we can arrange for any issues of concern to be addressed. The family can contact our Patient Advisory Services Department on 01 809 3234.”

Skydiver dies in tragic accident after his parachute failed…