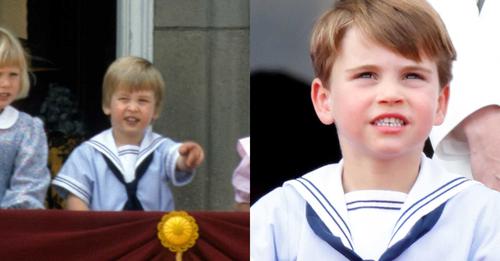 Wearing hand-me-downs is a part of childhood for almost all kids out there, especially when money is tight, and not even Prince William and Kate Middleton’s children have managed to escape it. Through the years, we’ve seen Prince George, Princess Charlotte, and Prince Louis wearing clothes their royal relatives sported first, and it’s so much fun to spot those retro fashion moments when they happen.

But this isn’t really about saving money (though it unquestionably hits that goal). In reality, this is about carrying on family traditions — and when it comes to the British monarchy, which is all about tradition, it’s one of the sweetest ways the royals (and their kids) go about it.

Scroll on to see photos of the clothes that Charlotte, George, and Louis have borrowed from their royal relatives over the years — whether it was their parents, uncle, or even their great-grandmother — along with photos of the original owners wearing the outfits the first time around. 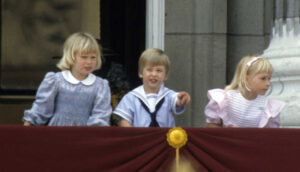 Prince William’s Sailor Suit
When Prince William attended Trooping the Colour in 1985 (when he would have been about 3 years old), he wore an adorable sailor suit — an outfit that was pretty on-trend for kids at that time. Do we really think Princess Diana would have dressed him in something that was out of style? 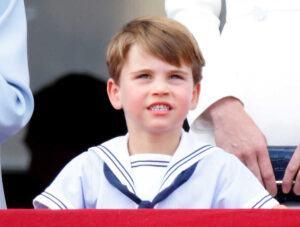 Prince Louis, More Than 30 Years Later
At Trooping the Colour in 2022 — part of the Queen’s Platinum Jubilee, no less — Prince Louis was spotted on the Buckingham Palace balcony wearing the very same sailor suit that his dad once did. Who wore it better? It’s impossible to decide! 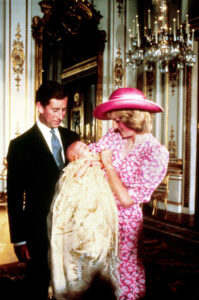 William’s Christening Gown
William’s christening gown was actually something historical. Even for him, it was a hand-me-down, with royals going as far back as George V donning the lace dress on their special days. It was really special to see William (and then brother Harry) continuing the tradition. 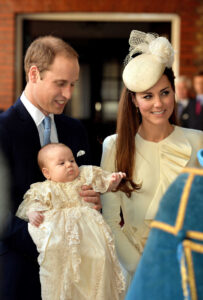 Prince George’s Replica Version
Before Prince George was born in 2013, a replica was made of the original christening gown so that royal children could continue to wear it through the years. So while George didn’t wear the exact gown his dad did, he may as well have. His siblings, Charlotte and Louis, would also wear the replica gown when it was their turn. 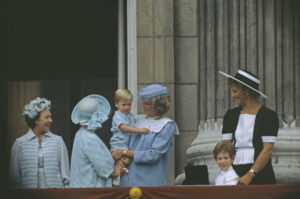 William’s First Trooping the Colour Outfit
William made his Trooping the Colour debut in 1984, and of course he did so in style. He wore a blue and white two-piece outfit that just so happened to match his mom’s ensemble (and they both looked pretty good). It’s no wonder all his royal relatives seem to be gushing over him in this photo! 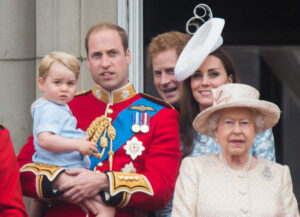 George’s Own Trooping Debut
When George made his first appearance at Trooping the Colour decades later, of course he wore the same outfit that his dad William did. It must have been such a treat for the Queen to see George all dressed up in something she saw his dad wear when he was small. 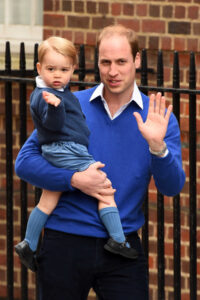 George’s Big Brother Outfit
The photos of George and William outside of the Lindo Wing, before heading into the hospital to visit Kate Middleton and meet Princess Charlotte for the first time are too cute. The day he became a big brother, George wore a blue sweater, matching navy shorts, and knee-high socks. 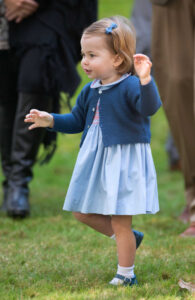 Charlotte Dons the Cardigan
Knowing how often Kate repeats her own favorite wardrobe pieces, it’s no surprise that her children do the same. The following year, Charlotte was spotted at an event for children, wearing the same cardigan over her dress. Cardigans were absolutely a wardrobe staple for her as a tot, so it fit her style perfectly.

And Then, Louis Is the Star

Given that a crocheted white onesie is obviously a gender neutral wardrobe piece, we shouldn’t have been surprised to see Louis wearing it when it was his turn to pose for portraits shortly after his birth. Here, he’s wearing the same outfit as the world got one of the first glimpses of the little royal.

Prince Harry at Trooping the Colour

Of course Prince Harry got in on the Trooping the Colour fashion fun! Here, he’s wearing a blue and white embroidered outfit in 1986, looking unmistakable with that bright red hair. (And of course, Diana looked amazing as usual in her red polka dots.)

Another look stolen by Louis! In 2019, the youngest Cambridge made his debut at Trooping the Colour, wearing an outfit that was passed down to him from his Uncle Harry. It’s so sweet that George wore William’s Trooping outfit while Louis wore Harry’s. Brothers!

When they’re young, royal boys are generally expected to wear shorts and socks rather than long pants (no matter the weather) so of course, George’s shorts collection was quite expansive. Here, he’s wearing a red patterned pair while traveling with his mom and dad.

When attending the Chelsea Garden Show in 2019 — the year that Kate designed a garden herself — Louis donned George’s red shorts, looking just as adorable in them as his big brother did years earlier. How cute is tiny Louis, ambling around this garden?

While at the same party where Charlotte was wearing George’s cardigan, George himself was wearing another piece that he had no idea would become a hand-me-down in the future: his blue pullover sweater. It wouldn’t be too long after this that the family of four would become a family of five.

When Louis had the chance to meet David Attenborough with the rest of his family, he got to wear George’s blue cardigan (and he looked just as good as his big brother did, to be honest). This must have been a sweet moment for Kate, seeing her kids so excited.