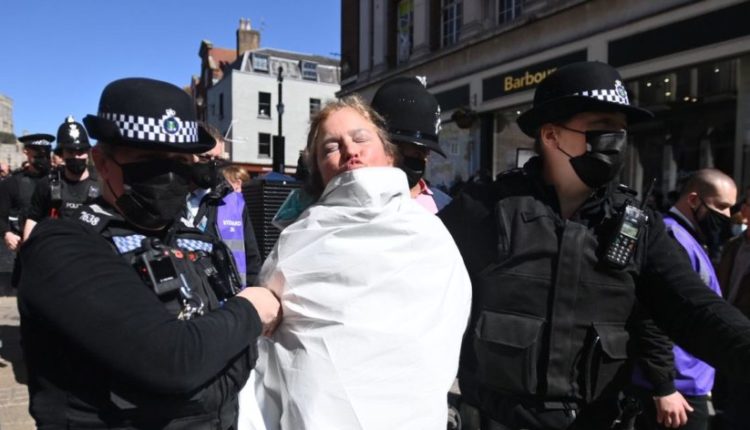 A topless woman has reportedly been arrested outside the gates of Windsor Castle where the funeral of Prince Philip is taking place.

A protester ran in front of a crowd near the castle following the minute’s silence for the Duke of Edinburgh.

The woman ran onto the road shouting “save the planet” after the crowd began clapping following the silence.

She jumped onto a statue of Queen Victoria before police officers removed her from the scene on Castle Hill.

Video footage from the scene shows police telling people to stand back and ushering bystanders away.

Hundreds of people fell silent in Windsor to pay tribute to the Duke of Edinburgh.

Mourners lined up outside the castle and paused for the silence, while others on the nearby Long Walk did the same.

Armed officers stationed above surrounding buildings watched on as the crowd joined the nation in paying tribute to the Queen’s husband.

The public was urged to stay away from the funeral amid coronavirus restrictions.

High street cafes near the castle were told to limit the number of tables they put out on pavements as authorities tried to discourage people from visiting or gathering.