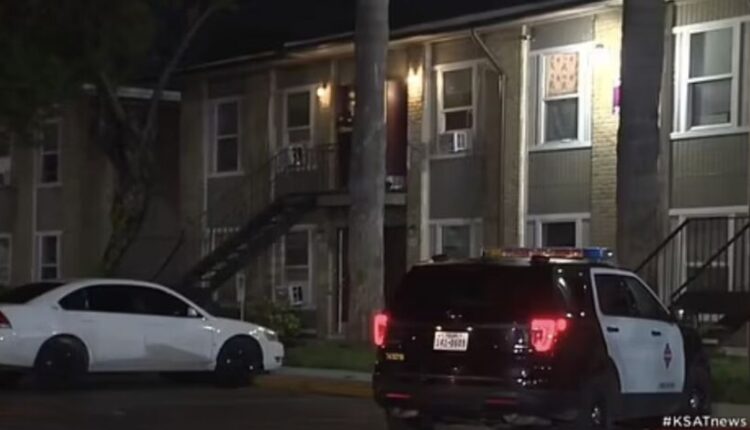 Three young boys told police “mummy is dead” after they were spotted wandering alone in the middle of the night.

The boys aged just 4, 5, and 8 told police they were walking to their father’s house before the eldest lead officers back to their home, in San Antonio, Texas in the USA.

Officers found the home covered in blood and the brutally injured woman, and mother to the tree tots, critically hurt in the bath.

She had been stabbed numerous times.

Officers had taken the two youngest siblings to buy snacks at a nearby petrol station, while the eldest boy helped get his mum help.

A report of the incident, reported in the San Antonia Express, said the children told police: “Mommy’s dead and we’re looking for daddy’s house.

The eldest boy took police to the blood-soaked apartment

They had been spotted shortly after 3am.

A policeman told local news station KSAT: “Based on the amount of blood in the home, officers initially expected to find someone dead.”

A 31-year-old woman suffered stab wounds to her stomach and legs before she was found at the second-floor apartment in San Antonio, Texas.

The police report added that it wasn’t clear if the woman, who wasn’t identified, was attacked or the wounds were self inflicted, the station reported.

She was taken to hospital in a serious, but not life-threatening condition. The investigation is ongoing.

Her three sons are now being looked after by family.

Back in August last year a three year old boy was found wandering the streets of Lancashire in the UK.

The tot, dressed in a onesie and no shoes, was spotted by staff who worked in a nearby nursery, having walked out of his house without his parents knowing.

The little toddler had fancied some time out on the street and had climbed through a window.

The little lad has been called an “escape artist” by his mum and she admitted it wasn’t the first time he had wandered off.

The tot was soon reunited with his parents.