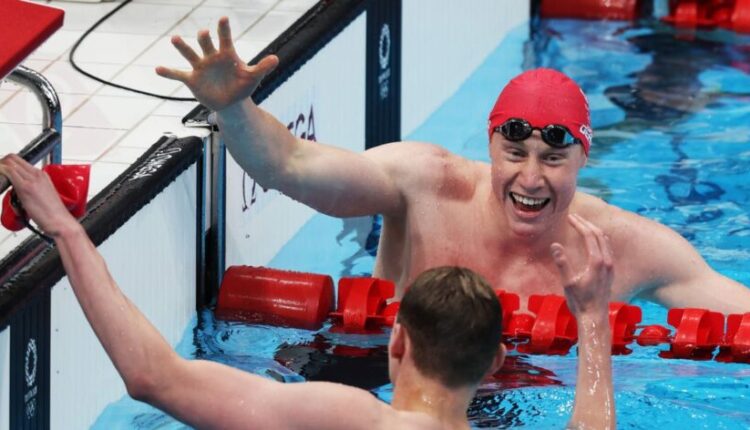 Team GB took a sensational gold and silver today in the men’s 200m freestyle in another brilliant day for the Brits.

It came after another earlier win for Team GB as Georgia Taylor-Brown scooped silver in the triathlon after battling back from a flat tyre and just 12 weeks after an injury left her using crutches.

She went into the race as the reigning world champion and one of the favourites for the title but had to play catch-up on the 10 kilometres run after getting a flat tyre on the last lap of the bike leg.

Dean, watched by fellow Olympic champion Adam Peaty, James Guy and a host of other British swimmers, punched the water as he celebrated his victory.

The Olympian, who twice contracted coronavirus last year, was third heading into the final 50 metres while Scott was down in sixth at the halfway stage, but the pair finished strongly.

After his victory – the first time we have taken gold and silver in the pool in one race since 1908 – Dean told the BBC: “I knew it was going to be a dogfight. I didn’t know how people were going to swim it.

“I just want to say thanks to everyone back home. I’m just lost for words. It’s amazing.”

He added: “It’s amazing. It’s a dream come true to wear Olympic gold around my neck. Going one-two with another Brit on the podium. What more could you ask for, really?

“I contracted Covid twice in the last 12 months, in the last season. I had six or seven weeks out during an Olympic year which is essentially unheard of.

“When I was sitting in my flat in isolation, Olympic gold seemed like a million miles off. But here we are.”

Scott said: “A massive credit to Dean. That was unbelievable. Olympic champion. He’s come along so far in the last 18 months, it’s a pleasure to watch.

Scott said he was ‘buzzing’ for his pal, nicknamed ‘Deano”.

“I am thinking of my coaches who have been with me since I was eight years old,” he said.

“I’m buzzing for Deano. He’s had a really strange 18 months with Covid twice. To see him win gold… I can’t complain. There’s plenty of things I’d be able to do better. But I’m really happy.”

Ahead of the Games, Dean told BBC Sport he had been struggling to walk up the stairs at home after contracting Covid in September and January.

He said: “It was the biggest setback, three weeks out of the water in January was brutal because it was then another three weeks of building it back up. It was upsetting because nobody takes six off in the build up to an Olympics.

“It was a real shock to the system but the it spurred me on because I knew I had some catch up work to do.

“The three-week build up back to training had to be structured to prevent any long-term damage to my heart and lungs so it was scary. When I can’t walk up the stairs without coughing and wheezing this is going to be tough to come back from, so that was frightening.”

Following this morning’s victory Dean reached out to shake hands with Glaswegian Scott as soon as he had won gold.

His team mate pushed him all the way in a thrilling race.

Watching in the BBC studio, former Olympic champion Rebecca Adlington said: “I cannot believe that just happened. What a swim that was!

“That was two of the best times for them. It was unbelievable.”

Scott is the young swim star who famously refused to shake hands with doper Sun Yang on a World Championship podium.

Images of Yang’s angry reaction when he refused to stand alongside him in 2019 went viral.

Yang was not defending his 200m freestyle Olympic title in Tokyo after he was banned for four years for smashing vials containing blood samples in a 2018 out-of-competition test.

Duncan stands by the rights of all athletes ‘to protest’. Next week, he will join his Rio 2016 roommate Adam Peaty as they aim to bring home our first Olympic team swimming gold since 1908 in the medley relay.

Duncan could be the first Scottish Olympic champion since David Wilkie in 1976 at Montreal.

The 24-year-old has just overcome dyslexia to graduate with an upper-second class degree in Business and Sport from the University of Sterling.

“One of the things I’m most proud of, in all honesty, is getting a 2:1,” he said. “I didn’t really enjoy school, being dyslexic, and having to balance it with swimming.”

Speaking before the race at the Team GB training HQ inside the Hiyoshi Campus of Tokyo’s Keio University – where he is next door to his mate “Peaty” – Duncan described Wilkie as a Scottish swim legend.

He says: “Chris Hoy was always an inspiration to me and Andy Murray – the way he conducts himself on and off the court.

“He is phenomenal – when he was asked why he still competes, he said it was because he still enjoys it and that is why he puts in all that hard work and that is really refreshing to hear.

“Adam Peaty talks a lot about that legacy and inspiring people and it does rub off on you. I loved watching sport growing up, including Andy Murray and Chris Hoy. If I could inspire just one person, that would be enough for me.”

A former district tennis player himself, Glasgow-born Duncan is drawing inspiration from the British team members all around him. “We are next to the rowing team in our training facilities here and it is unbelievable what they do,” he said.

“After I finished in the gym I watched a boxing session, and it is really special the way that we are all working for the same team and the same goal, I think that is really cool.

“In the village we will be playing a lot of cards, but we have to use the hand sanitiser after every one. The holding camp will be a bit more relaxed.”

Of his refusal to shake hands with Yang, he says now: “For the purpose of a clean sport, it was nothing personal against anyone, but it was seen in the right way.

“Several people have made their voices heard like Adam Peaty – he speaks about it a lot, and I back what he says.” Peaty has made it clear that athletes should have the right to protest – including at the Olympics.

At Rio, Duncan got to take on one of his all-time heroes – US legend Michael Phelps – in the relay, and emerged with a silver to shake hands with the greatest swimmer – and greatest Olympian – of all time.

Phelps later mentioned him in a media conference as one to watch. “Phelps was a stand-out hero for someone of my age,” Duncan recalled. “In 2008 the fact that there was no 4×100 mixed medley and he was able to get eight medals is just insane.

“I didn’t know the photo was being taken and it was just one of those, like after any relay, everyone shakes hands and says, ‘well done’.

“He’s someone I’ve looked up to massively and when I saw that photo it was actually a really special moment to get to race against him in one of his last races. It was really cool.”

The young Scot vividly remembers his arrival at Rio – aged just 18 – for his Olympics debut, when Adam Peaty discovered his entire luggage had been lost en route.

The living legend did not bat an eyelid as he went on to take Olympic Gold. “Nothing was going to bother him,” he recalls. “Any team with Adam is in with a shot.”