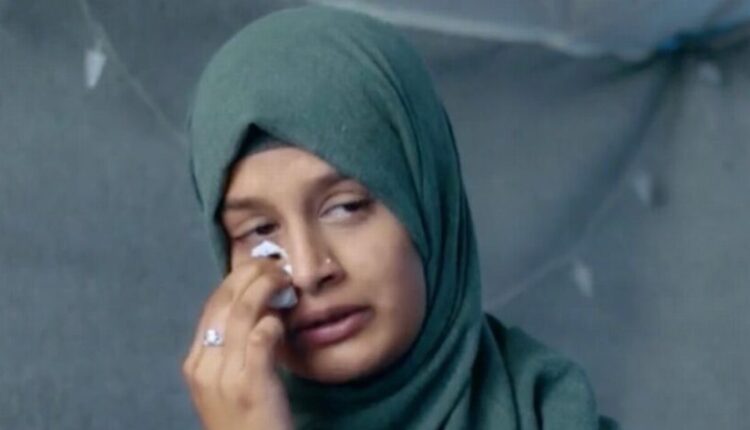 Shamima Begum ‘felt guilty’ about bombings after being targeted by recruiters

ISIS bride Shamima Begum says she and her friends were “guilted” into travelling to Syria to join the terror group after seeing videos of bombings that made her “sick to my stomach”.

The former London schoolgirl was 15 when she fled along with friends Amira Abase and Kadiza Sultana in February 2015.

Four years later she was discovered in a refugee camp in Northern Syria and pleaded to be allowed to return to the UK, but then-Home Secretary Sajid Javid withdrew her British citizenship.

In a new TV documentary, to be screened next week, she said that she and her friends said online recruiters persuaded the girls to leave their families, while “not really telling us the entire truth”.

She also accused the government of “making up” allegations against her to justify preventing her return, and tearfully said she wanted to kill herself following the deaths of her three children.

In the Sky documentary, The Return: Life After ISIS, Ms Begum said:

Recalling her childhood in Bethnal Green, East London, she said: “I didn’t have a good relationship with my mum, I didn’t speak to her. It really didn’t feel like she loved me sometimes.”

She described herself as “quiet” and “in the background”, adding: “I was like the black sheep of the family, I didn’t fit in at all.”

Ms Begum said she felt “really guilty” seeing videos of Syrians being bombed, saying: “It made me sick to my stomach that this was going on in the world and no one was doing anything about it.”

She said: “When I was young I felt like an outsider, I wanted to be part of something.”

The former London schoolgirl said she and her friends became radicalised online.

“Back in the UK there were a lot of people online recruiting people like my friends to come,” Ms Begum said.

“They were guilting us into coming, not really telling us the entire truth about the situation in Syria. We couldn’t distinguish what was the difference between fake news and real news, we were all really young.”

She said she felt “compelled” to leave, saying: “I didn’t want to be the friend that was left behind.”

Ms Begum and her two friends secretly plotted to fly to Turkey before crossing the border into Syria, and she said her family had no idea what she was planning.

She left in the morning as if she was going to school, hiding from her mum her true intention.

“I didn’t hug her, I really regret not hugging her,” Ms Begum said.

She said she and her friends were “nervous but excited” on the flight to Turkey, with their flight delayed, and after arriving they were driven to the border with Syria.

“It was really scary, they were just saying ‘run, run’. We thought we knew someone would shoot us, I was really scared at that point but somehow we got through.”

It was at that point that her mum – worried after she failed to return from school – rang her.

“My mum called, and I just went quiet. I didn’t know what to say back. I said ‘yeah mum, I’m here’, I was crying, after that I didn’t speak to her again.”

Ten days after her arrival in Syria, she married jihadist Yago Riedijk, a Dutch-born radical.

She said ISIS officials had asked her for “preferences” about the sort of man she wanted to marry, before being paired with him.

“He was so shocked that I didn’t know how to cook, I said ‘you married a 15-year-old, it’s your own fault,'” she recounted.

Contrary to what has been claimed about her, Ms Begum said, she was not a member of the “ISIS police” and was not given a machine gun.

“I think my government just wants to make me look bad, they couldn’t find anything so they made it up.”

In May 2016 Ms Sultana was killed in a Russian airstrike, while her family said she was planning to escape.

“The hardest part was having to tell her mother that she had been killed,” Ms Begum said.

“She didn’t believe it at first. She wanted to see a picture, but there was no way of showing a picture because the body was in pieces, but I couldn’t tell her that.”

Ms Begum said she had learned of Ms Abase’s death six months ago.

She tearfully described the deaths of her three children from illness. Her two oldest children died within weeks of each other while she was pregnant with her third child, she said.

The ISIS bride said she wasn’t able to mourn her oldest son’s death, but recounting her daughter’s fate she said: “I just felt like my entire world was falling part. I felt it was my fault for not getting them out sooner, they died from some illness, but I don’t even know (what it was).

“When she died I just wanted to kill myself, I couldn’t even run when there were bombings.”

She wanted to “do right” by her unborn child by trying to get out and give him a “normal life”, Ms Begum said.

When she was traced to the al-Hawl refugee camp in February 2019, she appeared to express no remorse in interviews with journalists.

Ms Begum said she was frightened of others in her camp who remained loyal to ISIS.

“I had no choice but to say certain things because I lived in fear of these women coming into my tent and killing me and killing my baby.”

It was at the camp that her third child, who she said had previously been heathy, died of an infection.

“My heart just broke, I had to wait all night with my baby when he was dead,” she said.

“He was my last hope, he was the only thing keeping me alive.”