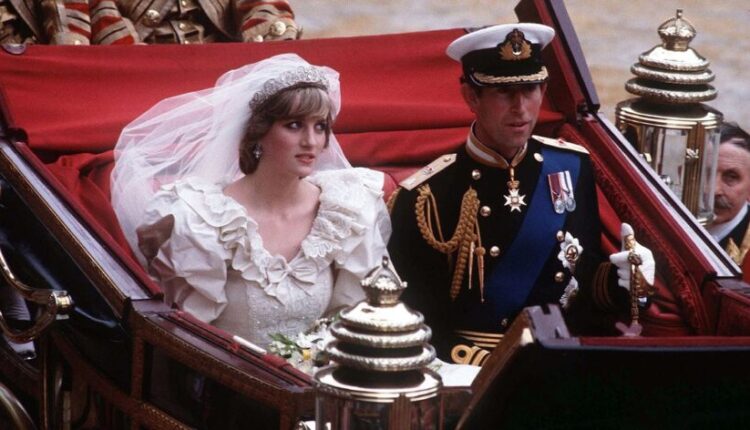 When Princess Diana married Prince Charles in a huge ceremony 40 years ago, it looked like the ultimate fairytale.

The late princess looked stunning in her huge dress and the crowds cheered when the newlyweds shared a kiss on the balcony of Buckingham Palace.

But it appears that both had doubts about the marriage in the lead up to their special day – and the pair had only met a handful of times before their engagement.

In particular, Diana was said to be increasingly worried about her future husband’s relationship with his then ex-girlfriend Camilla Parker Bowles.

Just days before saying her vows, Diana found a bracelet engraved with the letters G and F, which stood for Gladys and Fred – the nicknames Charles and Camilla used for each other, in Charles’s private secretary Michael Colborne’s office.

Prince Charles and Princess Diana on their wedding day in 1981 (

So when the big day finally came, it’s hardly surprising that she felt uneasy when she saw Camilla – who was on the guestlist – sitting in one of the pews at St Paul’s Cathedral.

Speaking on the Channel 5 documentary Charles and Camilla: King and Queen in Waiting, royal expert Jenny Bond said: “Diana told me much later in one of our private conversations that she had felt like a lamb to the slaughter as she walked up the aisle, which was very sad.

“I think she knew that things weren’t quite right, and when she saw Camilla in the congregation, was immediately uneasy about it.”

Diana and Camilla pictured together at Ludlow Races in 1980 (

In it, Diana recalls the “vivid memory” of seeing Camilla wearing a grey pillbox hat with her son Tom, a godchild of Prince Charles, standing on a chair next to her.

It would later be revealed that in the years after the wedding, Prince Charles had an affair with Camilla, with Diana claiming “there were three of us in this marriage” in her bombshell Panorama interview with Martin Bashir.

By that time, Diana’s marriage to Charles had broken down and the pair had separated. In 1995, Camilla divorced her then-husband, Andrew Parker Bowles.

In November of 1995, the Queen wrote a letter to Diana to express her annoyance at the Panorama interview and said: “I have consulted with the Archbishop of Canterbury and with the prime minister and, of course, with Charles, and we have decided that the best course for you is divorce.”

It reportedly left Diana furious as she felt she was being forced to agree to a divorce – despite not wanting one.

Days later, Buckingham Palace formally announced the divorce in a statement saying “after considering the present situation the Queen… gave them their view, supported by the Duke of Edinburgh, that an early divorce is desirable”. The following year on August 28, 1996, the divorce was complete.

Diana died following a car crash in Paris on August 31, 1997, alongside her companion Dodi Fayed.

Later, Charles and Camilla rekindled their relationship and in 1999 they were photographed together for the first time leaving a party at the Ritz.

And six years later in 2005, the pair married, with Princes William and Harry attending the service.

Meanwhile, when Charles ascends the throne, Camilla could get an unprecedented title.

Usually, the wife of a king uses the title of Queen Consort and ever since they went public with their relationship there has been much discussion about the role his second wife will take when the Queen passes away.

But at the time of their marriage in 2005, an official statement said it is “intended that The Duchess will be known as HRH The Princess Consort”.

This would make Camilla, 74, the first British royal to ever use the title of Princess Consort.