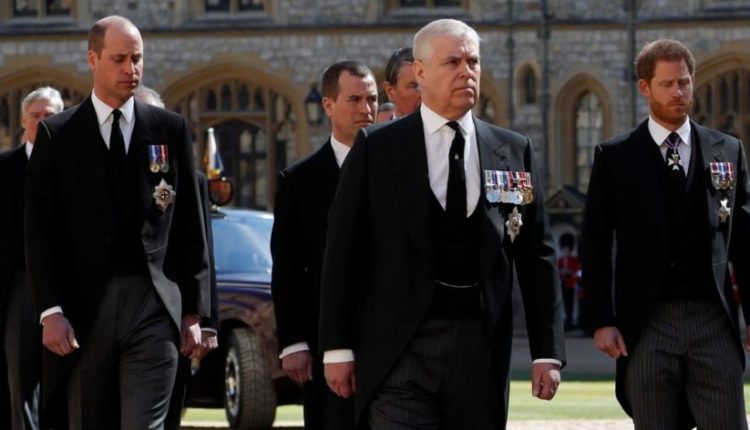 The Duke of Cambridge Prince William has been reunited with Prince Harry as the feuding brothers come together to pay their respects to their grandfather.

The men joined other members of the royal family to walk behind Prince Philip’s coffin ahead of his funeral at Windsor Castle.

However they did not stand shoulder to shoulder, with their cousin Peter Phillips standing between them in line with the Queen’s wishes.

Dressed in black suits with the military medals pinned to their chests, they looked solemn as followed the custom build Land Rover that carried the Duke of Edinburgh’s coffin to St George’s Chapel.

The brothers’ already fraught relationship hit a new low last month after Harry and his wife Meghan Markle made a series of shocking allegations about The Firm in their interview with Oprah Winfrey.

After the procession, the brothers walked into the chapel where William took a seat alongside his wife, Kate.

However Harry will sit alone in line with social-distancing rules. Heavily pregnant Meghan Markle was not able to attend on medical grounds.

He was seated on the opposite side of the chapel.

In their Oprah interview, the Sussexes accused an unnamed royal of making a comment about the colour of Archie’s skin and claimed the Duchess was denied help for her mental health after having “suicidal thoughts”.

Harry also said that his brother was “trapped” within the royal family and Meghan said the Duchess of Cambridge made her cry in the lead up to the royal wedding in 2018.

Asked if he would have quit the royal family if it hadn’t been for Meghan, Harry said: “No. I wouldn’t have been able to.

“My father and my brother – they are trapped. They don’t get to leave and I have huge compassion for that.”

Harry also said he felt “let down” by his dad Prince Charles.

He told Oprah: “He knows what pain feels like. Of course I will always love him but there’s a lot of hurt that’s happened and I will continue to make it one of my priorities to try and heal that.”

Meghan’s friend Gayle King said Harry had spoken to William on the phone but said their discussion was “unproductive”.

After months of rumours about a fallout between Harry, Kate, Meghan and William, the Duke of Sussex confirmed the rift during an interview with ITV’s Tom Bradbury during his tour of South Africa.

He said: “Part of this role and part of this job and this family being under the pressure that it’s under ­inevitably, you know, stuff happens.

“But, I love him dearly and, you know, the majority of the stuff is created out of nothing.

“Just as I said, as brothers, you know, you have good days, you have bad days.”

Harry landed back in the UK earlier this week and has been isolating in line with Covid travel rules.

Meghan Markle, who is pregnant with the couple’s second child, made “every effort” to attend but wasn’t given the sign-off from her doctor. She’s believed to be due in June.

The Duchess has reportedly made “private arrangements” to honour her husband’s grandfather.

Both Harry and William have shared moving tributes to their grandfather, and the Cambridges also shared a beautiful photo of the Duke taking Prince George on a carriage ride.

William wrote: “I feel lucky to have not just had his example to guide me, but his enduring presence well into my own adult life – both through good times and the hardest days.

“I will always be grateful that my wife had so many years to get to know my grandfather and for the kindness he showed her.

“I will never take for granted the special memories my children will always have of their great-grandpa coming to collect them in his carriage and seeing for themselves his infectious sense of adventure as well as his mischievous sense of humour!”

Harry described him as “master of the barbecue, legend of banter, and cheeky right ‘til the end”.

He talked about his “unparalleled devotion” to the Queen and said he Philip knew he would want them to “get on with it”.

Prince Philip’s children, Prince Charles, Princess Anne, Prince Andrew and Prince Edward, joined Harry and William to walk behind the coffin at todays event, along with Peter Philips, the Duke’s private secretary, protection officer and the Earl of Snowdon.

The family opted against wearing military uniforms for the occasion, and instead wore black suits and ties.

The Queen will follow behind in a car, accompanied by a lady-in-waiting.