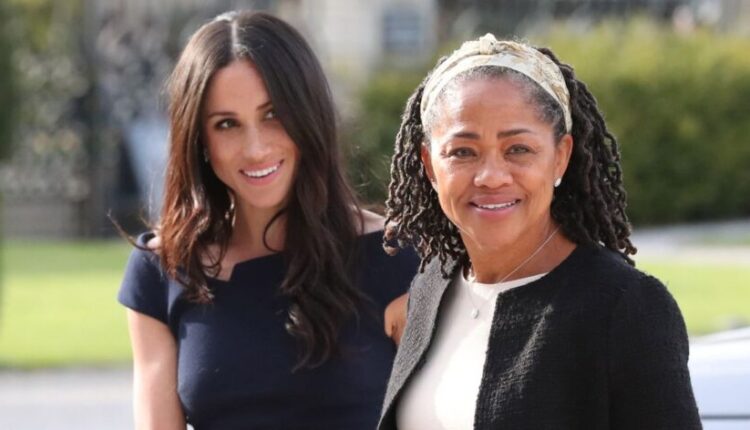 Prince Harry and Meghan Markle paid tribute to Doria Ragland in their daughter’s name Lilibet, it has been suggested.

The Duke and Duchess of Sussex announced the birth of their daughter at the weekend and revealed she was named after the Queen’s nickname.

The baby’s name has been carefully picked with touching nod to both Harry’s grandmother and mother, though there is another hidden reference to Meghan’s mother Doria.

But journalist Afua Adom said that it was “not just about being named after the Queen”.

Joined by royal biographer Angela Levin, who was highly critical of the name, journalist Afua Adom said on Good Morning Britain today: “Lilibet is such a pretty name, it’s such a cute name. It is not just about being named after the Queen.

“It is a bit of a nod to Meghan’s mother Doria as well, because Meghan’s mother’s nickname for her is flower, hence why we’ve got Lili in there for Lilibet.”

But host Susanna Reid wasn’t convinced, suggesting that it was “a bit of a stretch”.

“It is a bit of a stretch,” she conceded. “But it’s also a bit of a stretch to say that the Queen is now sitting up in bed with her egg and soldiers, blindsided and disappointed and fuming that her great grandchild is named after her!”

This comes after royal biographer Angela called Meghan and Harry “rude” for naming their daughter Lilibet and branded it “demeaning”.

“I don’t think it’s right, it’s rude,” she stated, leaving stunned host Susanna echoing what she had said in disbelief. “It was a very private nickname from her husband, who hasn’t been long dead.”

When Susanna pointed out that it hadn’t exactly been private as everyone knew of the Queen’s nickname, Angela said: “It was his name, it was his special name.

“I think it’s quite demeaning.”

Richard Madeley interjected, asked whether the Queen “when having her egg and soldiers this morning” wasn’t happy about the news.

“Not after what’s happened, she’s desperately unhappy,” Angela insisted. “Harry did mention to his grandma that he was going to name his daughter after her but I bet she didn’t know it was going to be Lilibet.”

She also insisted that the Queen was likely “blindsided” by the announcement.

The couple revealed the news on their Archewell website, saying: “On June 4, we were blessed with the arrival of our daughter, Lili.

“She is more than we could have ever imagined, and we remain grateful for the love and prayers we’ve felt from across the globe.

“Thank you for your continued kindness and support during this very special time for our family.”

Lilibet had been the Queen’s childhood nickname, and one used by her late husband Prince Philip during their decades of devoted marriage.

The Queen even left a handwritten note for Prince Philip on his coffin which was reportedly signed ‘Lillibet’.

The pet name was originally given to her by her sister Princess Margaret and dad King George VI, as she couldn’t pronounce her own name as a child.

It then stuck and she became Lilibet to her family from then on.

After the Duke of Edinburgh married Queen Elizabeth, he wrote to his mother-in-law saying: “Lilibet is the only ‘thing’ in the world which is absolutely real to me.”

The Royal couple also chose the middle name of Diana in a clear reference to Prince Harry’s late mother, the Princess of Wales.

Lili’s cousin Princess Charlotte also has Diana as one of her middle names, as well as Elizabeth. She is Charlotte Elizabeth Diana.

In his Apple TV mental health series, PrinceHarry lambasted the parenting skills of the Prince of Wales, criticising his father for expecting his sons to endure the pressures of royal life, just as Charles has done, instead of protecting them.

Meghan controversially claimed during her Oprah broadcast that Archie had his right to be a prince taken away from him because of his race.

In fact, he was too far removed from the crown because although he is a great-grandchild of a sovereign, he is not the “eldest living son of the eldest son of the Prince of Wales” as George V’s rules required.

The new baby will be entitled to be a princess and Archie a prince – both with HRH styles – after the death of the Queen and when Charles becomes king.