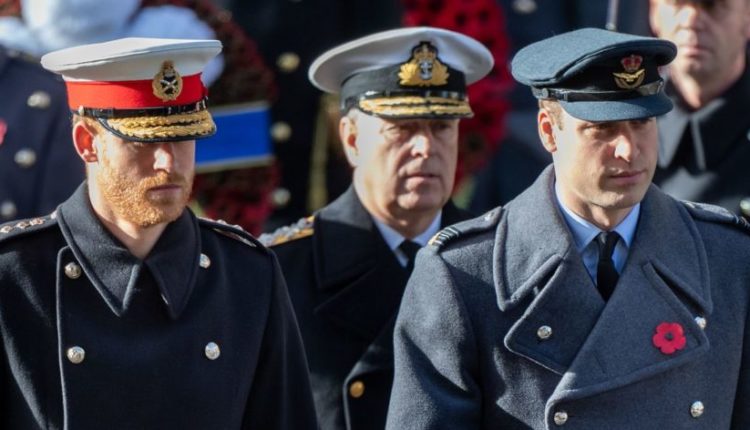 Princes Harry and Andrew will wear suits to next Saturday’s funeral for the Duke of Edinburgh, while their brothers don military uniforms, according to reports.

Harry was stripped of his role as Captain General of the Royal Marines earlier this year when he said he would not be resuming royal duties.

He had taken over the role from Prince Philip in 2017, but the Queen ordered his royal titles and military links should be removed.

Andrew stepped back from public life “for the forseeable future” as pressure mounted on the family over his links to paedophile pal Jeffrey Epstein.

The Sunday Times reports that both will don civilian clothing for next Saturday’s service as a result.

Harry, who is set to travel back to the UK for the funeral, will walk shoulder to shoulder with his brother William behind their grandfather’s coffin.

It is the first time he will join his family since his bombshell interview with Oprah Winfrey, in which the couple made a string of allegations about the royal family.

The brothers, who have barely spoken in a year, will put aside their differences to pay tribute to their beloved grandfather the Duke of Edinburgh.

Harry, 36, is expected to arrive from America inside the next 24 hours.

The Duke, who passed away peacefully at Windsor Castle on Friday with the Queen by his side, was said to have been “dismayed” at the disintegration of his grandsons’ relationship.

Royal sources revealed how he “urged them both to put to rest their differences, and not only remember their bond but also be mindful of their duty to the Queen and the country”.

Biographer Tom Bower says Harry must not be unapologetic for recent events, or he risk being “permanently divorced” from the family.

Writing in The Sun, he said: “Now, Harry faces a moment of reckoning. The negotiations for his return to Britain for the funeral are certain to be fraught.

“The tension will not be helped by the small number of mourners allowed at the funeral — just 30 because of Covid restrictions.

“Much will depend on whether Charles and William are willing to seek reconciliation.

“That will depend on Harry himself. If he arrives as a self-righteous, unapologetic warrior, he risks sealing a permanent divorce from his family.”