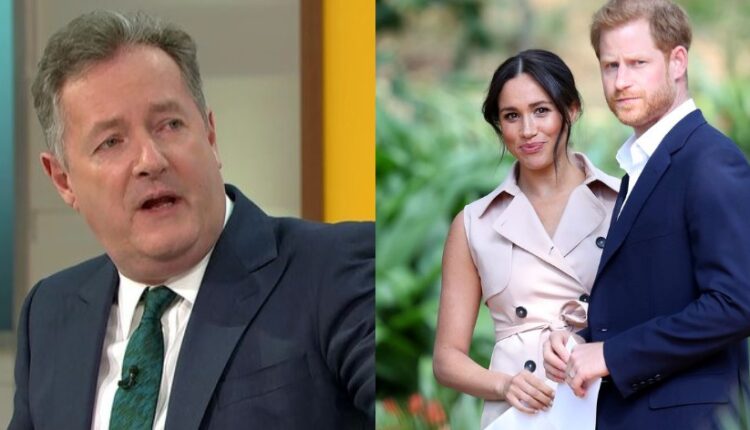 Piers Morgan has called for Prince Harry and Meghan Markle’s titles to be stripped as he launched into his latest rant about the couple.

The 56-year-old former Good Morning Britain presenter, who is a fierce critic of the Queen’s grandson and his wife, branded Harry a ‘hypocritical royal brat’ as he responded to news that he was writing a memoir.

Piers’ remarks, written in his latest, furious Mail Online column, came one day after Penguin Random House confirmed that they had signed a deal with Harry and are due to release his book next year.

Reeling from the news, Piers told readers that the memoir was a ‘slap in the face’ and once again called on Queen Elizabeth to strip them of their titles.

“The memoirs are a slap in the face too far for a family that’s surely exhausted all collective patience with the Sussexes,” he wrote.

“I’ve said this before, and I now say it again: the Queen should strip Harry and Meghan of all their titles with immediate effect.

He went on: “Compel them to do this malevolent, manipulative c**p in their names, not as royals.”

Earlier this week, the published confirmed that they had brokered a deal with Harry and would be releasing his intimate memoir late in 2022.

The company referred to the book as an “intimate and heartfelt memoir from one of the most fascinating and influential global figures of our time” and promises “an honest and captivating personal portrait.”

In a statement, Penguin also added Harry will share his “adventures, losses, and life lessons” – including from his time on the frontlines in Afghanistan.

Piers has long been a staunch critic of Harry and Meghan and has ramped up his attacks on the couple after they appeared in several high-profile interviews alongside Oprah Winfrey.

Earlier this year, the couple made several explosive revelations about their experience in the Royal Family. At the time, Meghan claimed that she was denied professional help when she felt suicidal, and at another point said a member of the family had questioned the skin colour of her unborn son.

Following their interview, Piers unleashed several scathing critiques of the couple on Good Morning Britain. However, it also looked to be Piers’ demise after he stormed off set after being challenged about his relentless attack of Meghan Markle.

After refusing to apologise, it was confirmed that Piers would no longer be presenting Good Morning Britain because he had left the show. Despite losing his ITV platform, it hasn’t stopped Piers from sharing his criticism of Harry and Meghan online.