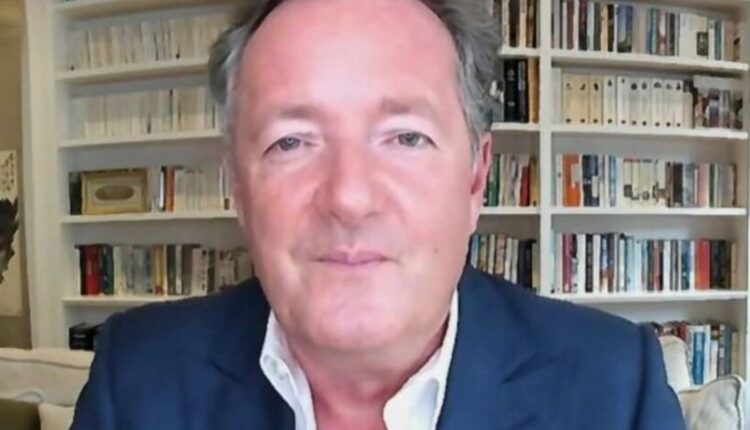 The former newspaper editor, 56, who enjoyed regular lighthearted spats with the BBC Breakfast host over social media about the ratings battle between their respective morning shows, claimed Dan lost his job on Football Focus because he was being replaced by Alex Scott.

He then told a follower that Dan, 44, had ‘lied’ about voluntarily leaving the BBC One show.

The former Good Morning Britain presenter began the dispute when he took to social media to share his disappointment over the Tokyo Olympics, and claimed that the athletes competing ‘didn’t care’ about the highly-anticipated event.

“Nobody cares about these covid-ravaged Olympics. I feel incredibly sorry for all the athletes still trying to live their Olympic dream, but that is the harsh reality. And the great champions like @adam_peaty know it,” Piers scathed, tagging double gold-medal winning swimmer Adam Peaty in his tweet.

“It should have been either further postponed or cancelled,” he stated, before going on to add: “Real sporting champions don’t celebrate coming 3rd.”

As his followers criticised his controversial opinion, Piers tried to clarify his original remarks.

“I don’t think Silver and Bronze medals are shameful, but no real champion would ever feel comfortable having one in their trophy cabinet,” he wrote.

His tweets prompted a backlash, led by Gary Lineker and backed up by Pointless presenter Richard Osman, who fired back at the former journalist’s claims.

“I suspect if you’d ever won a medal, of any description, in sport, you might feel differently,” former footballer Lineker replied.

While Osman quipped: “To be fair he was in second place in the breakfast ratings for years. I mean, in a field of two, but it’s still a silver medal.”

Piers then told Osman that his high-profile exit from Good Morning Britain back in March was a huge hit with viewers.

Dan then waded into the furore, and lambasted Piers for quitting GMB, after the former newspaper editor walked off the show following a tense argument with co-host Alex Beresford.

Piers was called out by Alex for his comments about Meghan, Duchess of Sussex, who said she suffered from suicidal thoughts as a serving member of the Royal Family during her interview with Oprah Winfrey earlier this year.

“You stormed off set when lanced by your own colleagues. They challenged you because you claimed a woman – who said she had suicidal thoughts – was lying,” Dan tweeted.

“Of course everyone watched but to claim that as a victory? Really? What a strange hill to die on,” he fired.

Piers quickly responded to his former rival, and calling him “Saint Daniel”, he alleged Dan had lost his job on the BBC One show Football Focus.

“Hi Saint Daniel, I called out Meghan Markle’s disingenuous bullsh*t, just as I did when Govt ministers spewed it. It’s called ‘journalism’ – you should try it sometime, then you wouldn’t keep losing jobs like Football Focus for being such a tedious virtue-signalling twerp!” he raged.

Replying to a follower who said Dan chose to leave Football Focus, Piers then alleged that the presenter had been replaced by Alex Scott.

“No, Dan lied to the public that he ‘chose’ to leave – but in fact got told Alex Scott was replacing him. No wonder he supports Princess Pinocchio… both speak with forked tongue!” he tweeted.