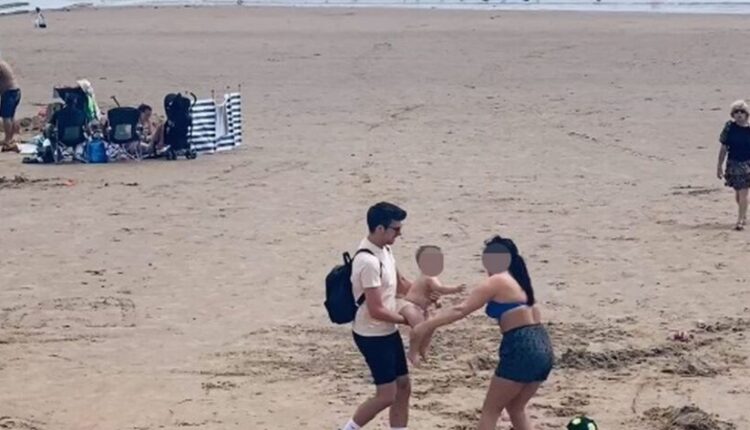 A mum’s reaction to being reunited with her wandering child who had gone missing on a beach has sparked a furious reaction online.

In the footage, recorded on a Kent beach last month, a man can be seen holding a young toddler looking around to find the child’s parents.

Michael Currid, 32, from Canterbury, posted the clip on Tik Tok on Monday, after finding the toddler at the top of a flight of steps which leads on to a busy road with cars driving past.

He is filmed by his partner, Lex Hartop, 28, a graphic designer, for a few minutes before the toddler’s mum appears to collect the child.

She was recorded while on a phone before holding out her arm for the toddler, taking him and walking away, then kicking a ball to another person.

Lex said of the incident: “Michael and I were walking down the side of the beach when we noticed a baby crawling up some steps.

“We were hesitant at first, then confused. The baby crawled up the second flight of concrete steps that lead from the beach to a busy road.

“We walked past three to four different groups of people – one group either side of the stairs down to the beach and another two on the beach, around 20 people in total.

“The baby must have crawled a long way and was either ignored or not noticed by anybody. From noticing the baby to returning her to her mother was all-around five minutes.

“We believe it was a girl. The baby said ‘mum’ upon seeing their mother turn round from a distance. The mother said nothing as Michael gave her back.

“We were shocked by what happened, and wanted to share it with our friends and family. We didn’t expect it to blow up as much as it has.”

The footage has been viewed over 1.6 million times with many posting angry comments about the incident.

“The way she doesn’t even thank the guy and continues on the phone, even kicks the ball,” one person said.

“Lucky the baby climbed the stairs and not into the damn sea,” added someone else.

Others heaped praise on Michael, adding: “Thank god for that guy finding the baby.”