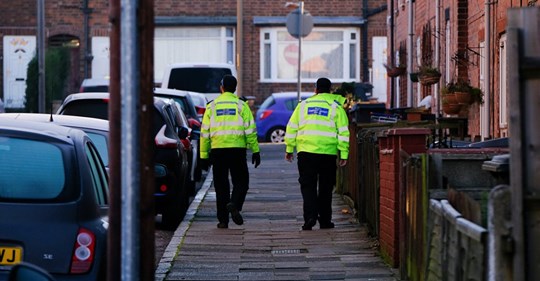 A TERRIFIED 10-year-old boy screamed “help me, I’ve been stabbed” after a laughing psycho knifed him in the neck in a random attack outside his home.

The schoolboy slumped to the ground after the hooded “psycho” slashed him then ran from the scene as the youngster’s mum desperately tried to stem the blood.

His sobbing mum today relived the horrific attack in Leicester that happened on Saturday afternoon as cops launch a desperate hunt to find the suspect.

Speaking to the Sun Online, the 31-year-old said: “I was pressing my hand on the hole of his neck to stop all the blood, he was losing so much and I thought he was going to die. It was awful and the images now keep coming in front of my eyes. I was terrified.

“I thought I would lose him and all my clothes and his were wet with his blood.

“The attacker was a stranger, my son didn’t know him, and he had half his face and head covered with a hoodie. After stabbing my son he starting laughing. My son said he looked like a psycho.”

Her son miraculously escaped with non-life threatening injuries and is now recovering in hospital. He is conscious but keeps telling  his mum: “I’m scared the man will come back for me.”

The horrendous random attack happened at 5.30pm on the pavement right outside the family home in Belper Street in the Belgrave area of Leicester.

No one else apart from the victim appeared to see the attacker who raced on foot from the scene.

The mum-of-two, speaking from her son’s bedside at Queen’s Medical Centre in Nottingham, wept: “Who could do this to a 10-year-old boy and then escape. He has to be caught before he stabs anyone else.”

Reliving the nightmare he told The Sun Online: “I saw my mum’s hands on his neck trying to stop the blood flow. She was crying as she tended the wound and nearly fainted. A neighbour called 999.

“I went inside to get some towels. My brother was conscious but dizzy and  he was losing so much blood. The attacker had slit his neck from the very back to the front by his throat The wound was 10 to 15 centimetres long and an inch deep. He needed loads of stitches.

“I was so scared for him but I had faith he’d survive.He was wearing a white T-shirt and is was covered in blood by the time the ambulance arrived.”

He added: “It was a horrible thing to do and I feel so sorry for my brother. He didn’t deserve that. We have no enemies, we have no problem with anyone.

“I was running up and down the street looking for the man but he had gone. My mum’s been crying all night, we’ve all been awake. People on the street have helped out. We’re feeling very unsafe now. It is usually a nice safe area.”

The little boy told his mum that the attacker was “bad smelling” and “seemed to have been drinking.”

Leicestershire Police are still hunting for the suspect who is described as a light-skinned Asian in his mid 20’s , around 5ft 10 ins tall of chubby build and wearing a brown jacket.

Officers were today continuing to make door to door inquiries and a cordon in place yesterday evening has now been lifted.

They are appealing for any witnesses to come forward and looking for any CCTV footage which may have captured the violent assault or the attacker walking down the road and then fleeing the scene.

Detective Inspector Tim Lindley said: “This was an act of violence against a young child who was out, in the street, with his mother.

“It happened in a residential area at a time of day when there would have been people about, either on foot or driving through.

“We need to find who was responsible for injuring this boy.

He today added: “Was a friend or family member out during this time and returned home in an agitated state or behaving out of character? If you have any information about what happened we want to hear from you.”