Let them judge you - Daily Net 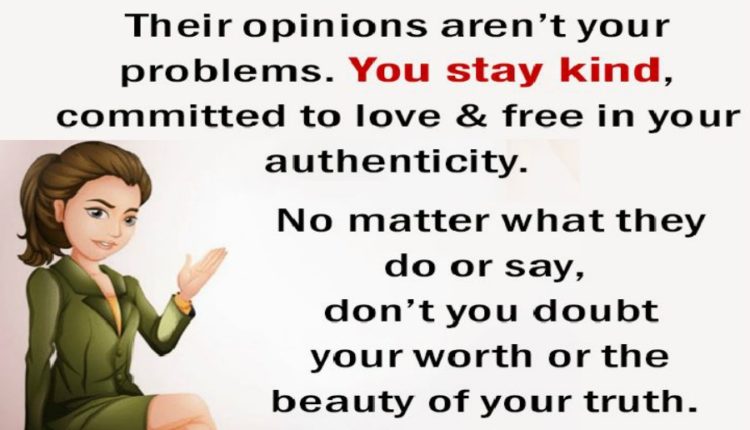 Let them judge you

How often do you feel judged? How often do you think ‘I shouldn’t do this/wear this/say this because people will judge me? How often has something embarrassing happened (fallen over in the street, kid is having a meltdown etc.) and all you can think is ‘Oh my God so many people are judging me right now? Well it’s likely that one of these has applied to you at some point, if not all three.

Let them misunderstand you

So often we are worried about what people will think, not because we are doing something wrong but because we think people won’t understand what we are doing/wearing/our situation etc. The thing is, they really will misunderstand your situation, because they have no idea what your situation is. How can a stranger possibly know what is going on in your life? Now, they know they have no idea about your life or your situation, so why don’t they say to themselves ‘I don’t know that person, I don’t know their situation or their stage in life so I cannot judge them for their choices’. Wouldn’t life be great if everyone could do that. Unfortunately, that is not the world we live in, judging people is something we generally have to stop ourselves doing as apposed to remember to do it.

I was at the fair with my family this weekend and my husband was wearing an FCK hat, which is a German football team. We were waiting at a food stall and a man said in somewhat of an angry voice ‘does that hat mean what I think it means?’ my husband said ‘oh no, it’s a German football team’. The man immediately smiled and says ‘I don’t suppose it’s really any of my business what your hat means’ and proceeds to have a long chat with my husband about Germany. This man did something that people rarely do; he was pretty sure he understood the situation but he asked a clarifying question. He found out he was wrong and then almost immediately felt guilty for mis-judging my husband.

As for everyone else who assumes they know but are very much mistaken, let them judge! You don’t need their approval. Know that whatever they are thinking is wrong and carry on your merry way. 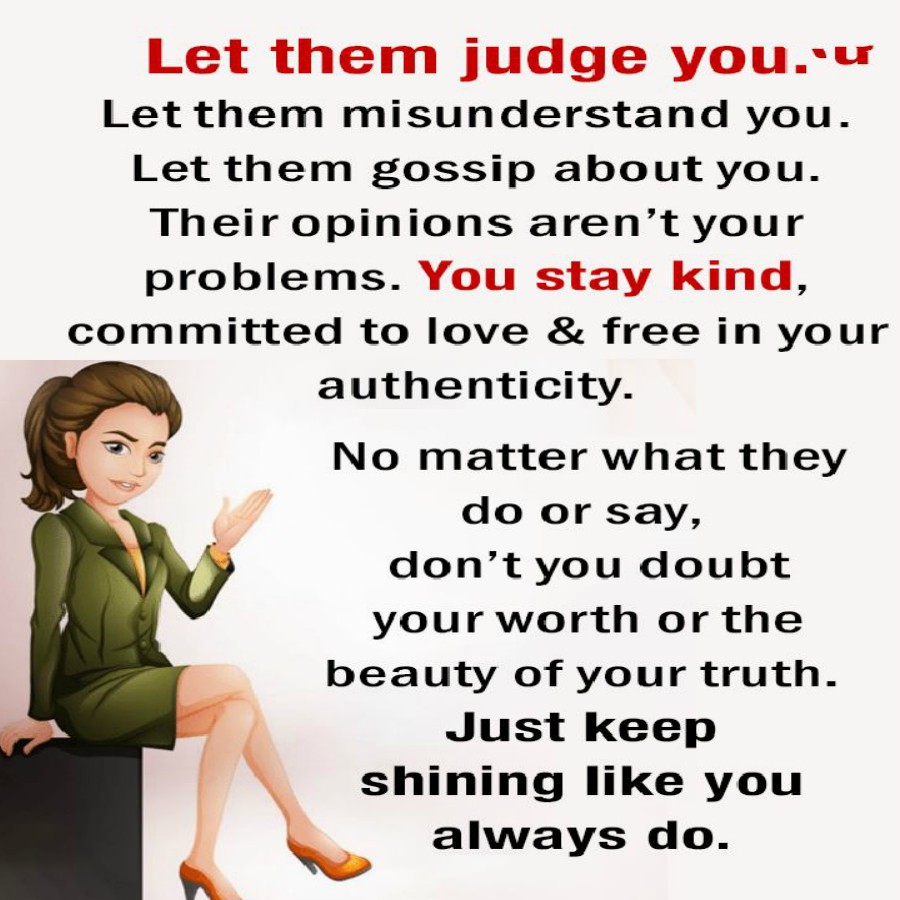 Let them gossip about you

Ahh, gossip another one of those human nature things. So often we engage in gossip without realizing we are doing it. I would wager that most of the time people mean no harm by it, but of course there are those that do mean to hurt you with it. However, as I said previously, they don’t know the situation, sure the people gossiping about you may know you but they don’t know everything going on in your life. So, if they think you have done something worth gossiping about, they likely don’t know much about that situation. Rather than looking at it from the perspective of ‘that’s so embarrassing that they are talking about me OR I am so angry that they would talk about me’ lets turn this into a positive. Firstly, you are positive that you are awesome and clearly that is why they are talking to you. Secondly, you are positive that their understanding of the situation is misunderstood and therefore all gossip is clearly invalid and untrue.

Let them gossip, they tell stories, they fill their time and they move on. You choose to move on first.

Their opinions are not your problem

As Rachel Hollis said in ‘Girl, wash your face’ “Someone else’s opinion of you is none of your business”. What other people think is especially none of your business. Do you know how many things I think in a day that would get me in trouble if everyone could read my mind? Quite a lot. I don’t think these things because I mean any harm to people, things just jump into my head, often in fact, I think something bad and then think ‘why did I even think that?’. That’s the first very important reason why other’s thoughts are not your problem. Secondly, it makes no difference to your life if someone thinks that dress makes you look fat, because you don’t get fat from what other people think. If you put on that dress and felt you looked good, well then shit you look good. Another person’s opinions cannot make you any of the things they think. You are you and there is nothing anyone can do about it. The only person who can change you is you!

You stay kind and authentic

So, if their judgments, misunderstandings, gossip and opinions are none of your business then what is your business. You! You are your business, you living your best life, you being your best you, being your authentic self. This doesn’t mean making changes and becoming more, whatever you think you are supposed to be. It’s about being who you want to be, whether that’s something huge or something small. Its about loving the person you are now, despite what people say or what they might think. Be kind to people, even those who are unkind to you, because you are the bigger person, a kind soul can only go dark if you let the darkness in.

Don’t you dare doubt your worth or beauty

As the great poet, Dr Seuss once said ‘Today you are you, that is truer than true. There is no-one alive that is youer than you!’ I know, I know it’s a kid’s book but it really is truer than true. The unique is beautiful, because it is different, because it is unlike anything else. When you are being you, when you are being true to yourself and being authentic, you are at your most unique and that, that right there is true beauty. You are beautiful inside and out. You are worthy of love and that love should start from within. Not because, if you don’t love yourself no-one else will love you, that’s a pile of crap. That would mean that every time I felt down about myself everyone around me would stop loving me. They don’t! The reason it should start from within is because no-one can help you with that, but you. Self-love comes from the inside and it doesn’t matter how many people tell you that you are amazing if you don’t believe it, you won’t feel it. However, if one person tells you ‘you suck at life’ you believe them because negativity is a slippery, sneaky SOB. So, don’t allow the judgers, the uninformed or the gossips to make you doubt who you truly are, how amazing you really are.

We are surrounded by criticism every day, spoken or unspoken. However, just because someone was staring right at you, that doesn’t actually mean they are looking at you, it doesn’t mean they even see you. Every one is playing the lead role in their own movie and that means those around them are either supporting roles or extras. The thing is, we are all in the same movie. So, while you are the lead in your movie, you are an extra in their movie and may not be at all important to their storyline.

Just remember that judgement will happen whether we like it or not but how we react to it and how we internalize it is what is important. Approaching it with a positive attitude and understanding that other people’s opinions are neither important to us or able to change the people we are.

When have you felt judged? How did it make you feel?