Karma. No need for revenge

It might feel like it does in the moment, or just before … but revenge doesn’t feel all that great. Mahatma Gandhi once said, “An eye for eye only ends up making the whole world blind.” And it’s true. According to author and director/owner of the Dialectical Behavior Therapy Center Karyn Hall, Ph.D., “Researchers and theorists believe that revenge is a form of establishing justice and that the threat of revenge may serve as a form of protection, a kind of enforcement of social cooperation.”

For a brief moment you’ll feel better, but it doesn’t stop or erase what has happened to you. In fact, strong people often feel more deeply than others. And revenge may only set off a strong person’s sympathy or empathy for the person they got revenge against. And that’s only going to make them feel worse. So, in the end, seeking revenge against someone just isn’t worth it. Letting karma do all the work, however, is.

It can get you in trouble

If your partner cheated on you, the tempting thing to do is give them the Carrie Underwood treatment and key their car. Sure, it’ll feel great, but … Carrie Underwood’s song doesn’t talk about the real, tangible consequences of letting your emotions seek out revenge for you.

There’s no reason to get your hands dirty. Karma will make sure that your ex partner’s car gets rear-ended, or they get a flat tire on the way to an extremely important job interview or meeting. Stay out of trouble and let karma do the rest for you.

You can’t face everyone

If we were to try and seek revenge against every person who had ever wronged us, we would be spending more time doing that than moving on with our lives! And that’s not good. “Revenge is the desire to get even when someone does you wrong. It’s natural to feel angry… However, revenge reduces you to your worst self, puts you on the same level with those spiteful people we claim to abhor,” says Judith Orloff, M.D., author of The Empath’s Survival Guide: Life Strategies for Sensitive People.

A strong person knows when to walk away, even if it’s frustrating at first. But a strong person also knows that karma will come back around to whoever has done them wrong. Moving forward and healing from a bad situation is always the better option than trying to seek revenge against another person. After all, karma doesn’t have a time limit. Karma will be able to go down the list of people who have wronged you – one by one.

Karma comes back around

You might not want to seek revenge against someone who’s harmed you because karma … will come back and bite you in the butt, too! Strong people know this. They know that even if the other person deserves it, it isn’t worth having karma come after them, too. Even if it’s tempting to seek revenge against them, it isn’t worth putting that bad energy into the universe. This strength in the universe is incredibly powerful. There’s no need to get on karma’s bad side. Just hold your head up and walk away. 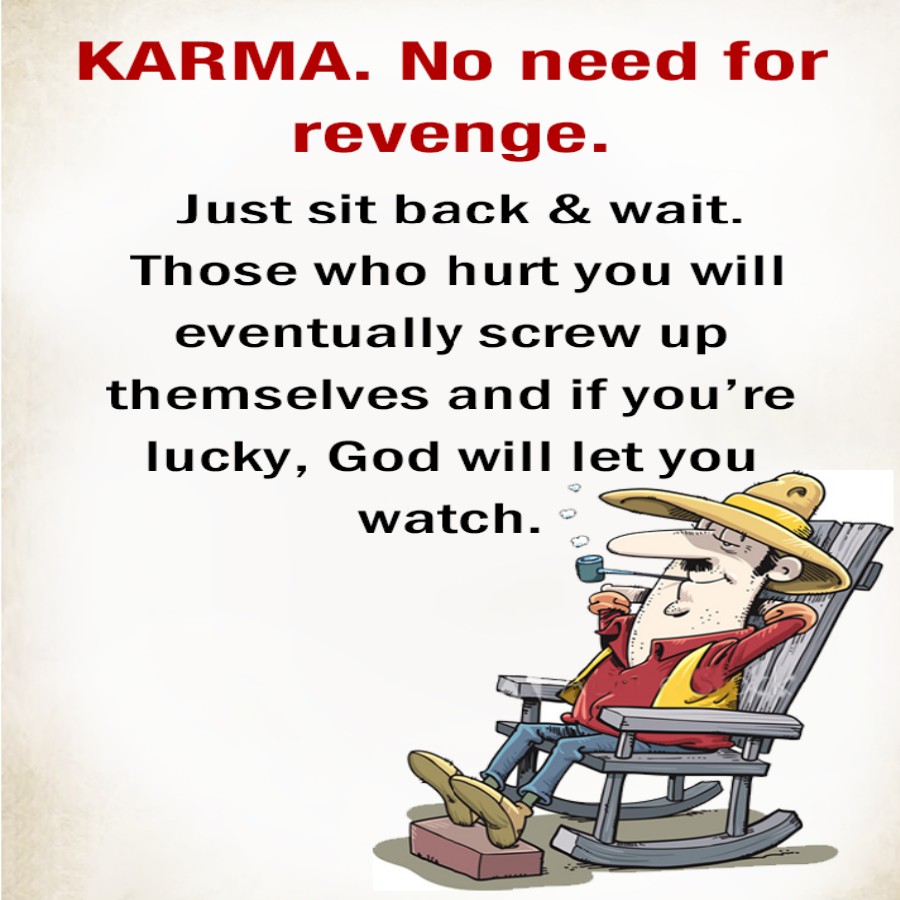 Remember, “what goes around, comes around.”

The best karma is success

Nothing is going to get under someone’s skin like seeing you succeed, especially if they did everything in their power to try and make that not happen. A strong person knows that the best karma in the world is simply picking yourself up and moving forward with your life. Healing, succeeding and reaching all of your goals is going to be the most amazing karma. Karma isn’t just for bad people, either. While the person who harmed you is going to be stuck where they are, karma has given you that extra boost you need to succeed.

Some people aren’t big believers in karma, and that’s okay. Even if you don’t believe that karma is going to come and get the people who wronged you, it’s still a good practice to keep your head up high and focus on succeeding rather than trying to get revenge. You’re not going to be able to control what another person does, but you’ll always be able to control yourself. There is no better revenge than succeeding in the face of people who wanted you to fail.