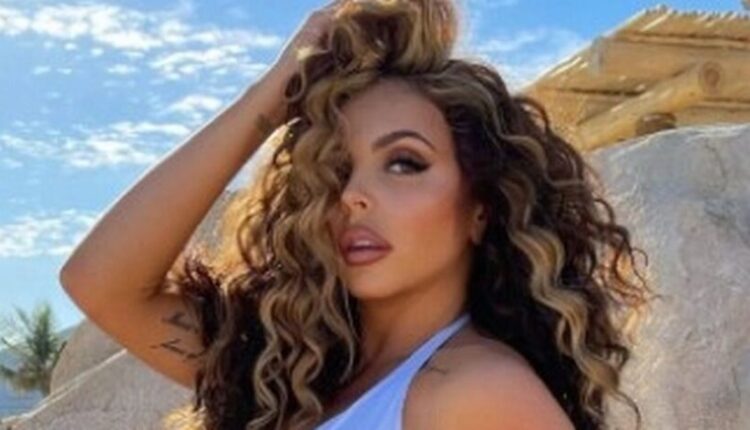 Jesy Nelson looked stunning as she stripped down into a chic white bikini to soak up the sun after jetting off abroad.

The former Little Mix star, 29, has been hard at work recording her first solo music since leaving the girlband and appeared to relish a break in warmer climes.

Showing off her extensive tattoo collection, Jesy was picture perfect as she struck a pose while resting on top of a large rock in her swimwear.

She let her luscious curls cascade down her back and sported some expertly applied make-up and pink nail extensions to complete her glamorous beach babe look.

The star chose not to disclose her mystery location but teased it was somewhere very hot as she shared three sunshine emojis in the caption.

Naturally, the star was inundated with compliments from her followers.

No doubt Jesy will be raising a cocktail or two to her recent achievement of signing her first ever solo record deal.

Jesy said putting her name on the dotted line so soon after leaving the chart-topping band Little Mix was a ‘pinch me moment.’

“I cannot wait for you guys to hear what I’ve been working on,” she told her fans.

Jesy has been teasing fans with videos of her hard at work in the studio with her team but has so far kept her new sound under wraps.

Meanwhile her ex bandmates Leigh Anne Pinnock, Jade Thirwall and Perrie Edwards made sure Jesy’s time with them was not forgotten as they thanked her in their Brit award winning speech.

The trio gave a shout out to Jesy while picking up the coveted statue for Best British Group, making history as the first girlband to ever do so.

Behind the scenes, sources close to the ladies say that Leigh-Anne, Jade and Perrie have formalised Jesy’s exit from the group by agreeing that she will not earn a penny from their future gigs.

Victoria Beckham is said to have made a cool £1million from the Spice Girls 2019 reunion despite not singing a note on the tour.

A source told The Sun that Jesy had not negotiated a similar contract on her departure.

Speaking about her shock exit for the first time this month, Jesy admitted she had decided to go after reaching ‘breaking point’ while filming a music video.

Jesy said she felt as though she put on weight in lockdown went left her anxious and she went on an extreme diet ahead of the shoot for single Sweet Melody.

But she had a breakdown on set as she “didn’t look how I wanted to look” and ended up sobbing in her dressing room and begging to go home.

She told Cosmpolitan: “We’d been in lockdown, and it was the first time I could have a break and be at home around people that I love. It was the happiest I’d ever felt and I didn’t realise that until I went back to work. I immediately became a different person.

“I had anxiety. Whenever we have a music video I put an enormous amount of pressure on myself to try and lose weight. I have a fear of looking back on the camera. If I don’t like what I see, I find it so hard to be in front of the camera and feel amazing and perform.

“I’d been in lockdown, and I’d put on a bit of weight but I didn’t care. And they said, ‘you’ve got a music video in a couple of weeks’ and I just panicked. I went on this extreme diet, with bloody shakes, and tried to eat as little as possible. On the day of the Sweet Melody video I had a panic attack on set because I didn’t look how I wanted to look and I found it so hard to just be happy and enjoy myself.

“There’s a scene in Sweet Melody I’m not in because that’s when I had a panic attack and broke down. I was like, ‘I just want to go home.’”