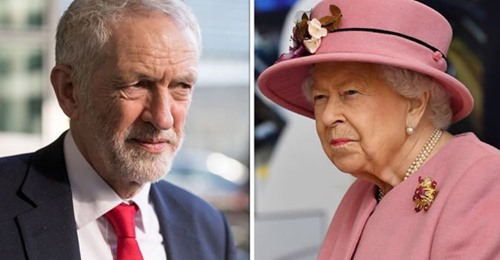 The 71-year-old came under fire on Friday after posting an “insensitive” tweet just 40 minutes after the tragic passing of Prince Philip was confirmed. In the now-deleted message, the Islington North MP posted a link to an event inviting people to “support the Bolivian people”. Mr Corbyn later paid tribute to the Duke, writing: “Losing a loved one, as so many families have this past year, is always heartbreaking. My thoughts are with Prince Philip’s family and all who loved him.”

The former leader of the opposition is a well-known republican but has previously said that given the Royal Family’s popularity, “it’s not a battle that I am fighting”.

Despite this, he has previously slammed the royal ceremony for the State Opening of Parliament, saying in 1998 that “it’s absolutely ridiculous, this 18th-century performance, the horses and the knights and everybody else turning up for the Queen to read a speech she’s never even read before, let alone written”.

And, in 2015, Mr Corbyn created quite the stir after he was invited to join the Privy Council – the formal body that advises the Monarch on the exercise of royal prerogative.

As part of the ceremony, politicians kneel before the Queen and kiss her hand, a tradition that Mr Corbyn stated he “didn’t know” was involved when questioned in the lead-up.

But speaking to ITV News before the ceremony in 2015, Mr Corbyn said he would not be kneeling.

He said: “I don’t expect to be kneeling at all, no.

“I expect to be nominated to the Privy Council and that’s it.”

And, according to the Guardian, he did not kneel before the Queen as he was sworn in.

Labour said after the event that he complied with the process, but it is understood Buckingham Palace does not force Privy Council members to do things they are not comfortable with and so Mr Corbyn did not have to kneel.

At the time, a Westminster source said the Queen “did not want a constitutional crisis” by insisting on him kneeling, adding that the Queen accepts that “Jeremy’s republicanism is well known”.

A royal source said: “The Queen is not someone who stands on ceremony, she wants people to feel comfortable but the Privy Council is an important mechanism and that is why it is important that he is there.”

It came after Mr Corbyn turned down the chance to attend a meeting of the council because of “private engagements”.

And, according to the Telegraph, Mr Corbyn may have toyed with the possibility of using a loophole to allow the Privy Council to appoint a new member without them being present.

An unnamed member of the Council is quoted as saying at the time: “Firstly it is deeply insulting and secondly it is not grown up – not to go to see the Monarch is just extraordinary.”

While MPs have to swear or affirm allegiance to the Queen, the oath required of privy council members is more extensive.

The current wording, which has been around since Tudor times, states: “You will not know or understand of any manner of thing to be attempted, done or spoken against Her Majesty’s person, honour, crown or dignity royal, but you will let and withstand the same to the uttermost of your power, and either cause it to be revealed to Her Majesty herself, or to such of her Privy Council as shall advertise Her Majesty of the same.

“You will in all things to be moved, treated and debated in Council, faithfully and truly declare your mind and opinion, according to your heart and conscience; and will keep secret all matters committed and revealed unto you, or that shall be treated of secretly in council.”

But it was not the last time he was involved in such an ordeal.

He appeared to once again refuse to join his peers in paying his respects to the Crown as Her Majesty prepared to give her speech to the House of Commons and House of Lords in 2017.

While Theresa May was seen bowing her head to the Queen moments before giving her address, the Labour Party leader stood defiantly.

One said: “#Corbyn no respect. He is like a more stupid version of Rick from the young ones.”

Another added: “Hearing that #Corbyn did not bow to the #Queen. How could he have any respect if he became #PrimeMinister?”

While a third person wrote: “#corbyn is a classical t****r and HM is above such idiots.”

But Corbyn’s aides responded after backlash on social media, insisting that he had followed the correct protocol, which is for former Speaker John Bercow and Commons officials to bow to the Queen on behalf of MPs.

It was the Prime Minister who got it wrong, they stated.

Their explanation appeared borne out by the fact that other senior Tories also did not bow, including then-Foreign Secretary Boris Johnson and then-First Secretary of State Damian Green who arrived in the upper chamber behind Mr Corbyn.

Damian McBride, an aide to then-Labour Shadow Foreign Secretary Emily Thornberry, followed up with his own analysis of footage from state openings dating back to 2010 which he said showed neither main party leader bowing, except in 2013 when David Cameron and Mr Corbyn’s predecessor, Ed Miliband, slightly nodded.