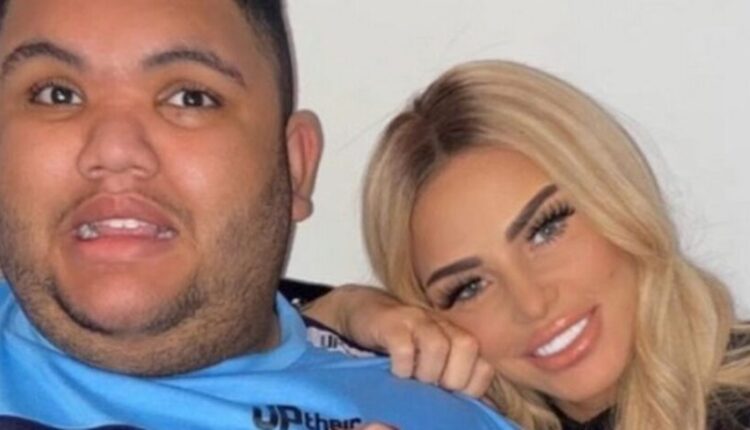 Katie Price was left in stitches after her fiancé filmed a cheeky moment in which he offered her eldest son Harvey a beer.

The 32-year-old reality star, who proposed to Katie earlier this month, decided to offer Harvey a bottle of Peroni, but the teenager didn’t seem impressed.

In the clip, Harvey repeatedly declined Carl’s invite to share a beer because he actually wanted some orange squash.

In the clip, that Katie shared on her Instagram page, Carl can be heard saying: “Harv, I’ve got you a nice cold beer.”

“Go on, have a beer with me,” Carl begs, despite Harvey saying no to the offer.

“What do you want then, an orange squash?” Carl then asks, before Harvey swiftly changes his tone and says yes.

The former glamour model was inundated with messages from fans who praised Harvey for his bubbly personality.

“He’s so lovely. His personality is amazing. I love the videos of him. He really does make me laugh xx” wrote one fan.

“I love seeing videos of Harvey and he makes me smile how he expresses himself. Fab lad,” added a second.

Katie often shares clips on her social media pages that feature Carl and Harvey sharing a cheeky joke together. A few weeks ago, Carl was filming Harvey as he wound him up by trying to pinch his carrot cake.

The mum of five also recently revealed her pride after Harvey cast his attention to getting healthy by taking up running.

Harvey, who was born with Prader-Willi Syndrome, is autistic and partially blind, was pictured enjoying a run outside of his residential facility.

The 18-year-old wrote to his mum at the time: “Hi mummy. I did some of a lot running before richley house this Afternoon because I feel very happy and very healthy doing some running. I’ll Sure see you soon Mummy love from Harvey.”