Girl, 8, dies after complaining of sore throat and struggling to swallow - Daily Net 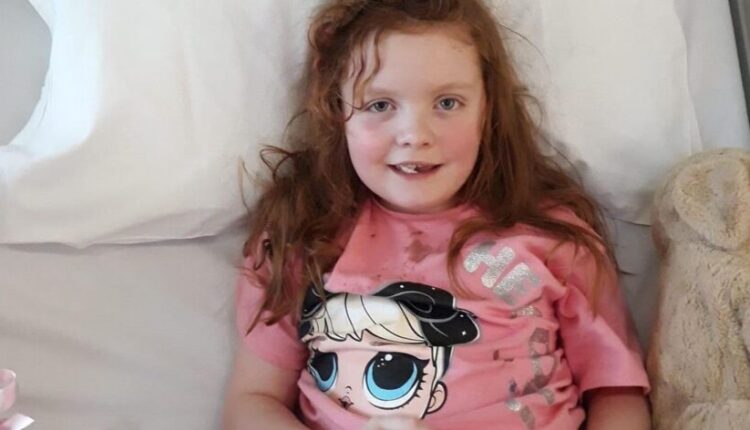 Girl, 8, dies after complaining of sore throat and struggling to swallow

A schoolgirl who ‘cared about everyone’ has died after being diagnosed with a brain tumour.

Claudia Carrick first complained of a sore throat and struggling to swallow on February 11. The little girl fell ill later that day before being rushed to Alder Hey Children’s Hospital where a scan revealed a build-up of fluid in her brain.

An operation the next day showed Claudia had a brain tumour, Liverpool Echo reports.

Due to the position of the tumour, Claudia’s mum Allison was told that it was inoperable.

On February 16, Alison and her mum Olwyn, were told the devastating news that the tumour – called Diffuse Intrinsic Pontine Glioma (DIPG) – was incurable.

Claudia’s auntie Jayne, 44, said: “The whole family can’t process it. She had a few dips over her time and we kept thinking ‘is this going to be the end now?’

Claudia with her twin brother Robin (

“She did struggle towards the end. She had the death rattle which was just horrific. My sister would want to praise the High Dependency Unit at Alder Hey. They were really good with Claudia.”

The eight-year-old was diagnosed with Diffuse Intrinsic Pontine Glioma (DIPG), an aggressive brain tumour most common in children, on February 16.

Claudia, who lived in Bootle, suffered with a collapsed lung in the months leading up to her death and was transferred between a standard ward and the High Dependency Unit, where she eventually stayed.

Claudia’s illness was the first time she had spent any time away from her twin brother Robin, who the family said is her “soul mate.”

The family spent days at Claudia’s bedside before her death.

She was diagnosed in February (

Jayne described her niece has ‘caring’ and empathic’ and said she would often share her pocket money with her brother and come running over whenever someone fell over.

Holding back tears as she spoke, Jayne said: “She was such a caring child. She cared about everyone. If she fell over or anything she would run over and make sure you were okay. She puts everyone before herself.

“If Robin would spend his pocket money and she had hers left she would split it with him. She was that kind of child. She was very empathic and caring with her nature.”

DIPG is an aggressive, fast growing type of brain cancer which most commonly affects children.

In the months before her death, Claudia wrote a bucket list which included things like going to the zoo and going in a limousine with her twin brother Robin.

She was described as ‘caring’ and ’empathetic’ (

The list also included Claudia’s wish to be a bride for the day by dressing up in a white princess dress.

A Go Fund Me page was set up to help raise money for the family and allow them to make special memories together, which raised more than £27,000.

Speaking previously, Jayne said the family would also like to thank Claudia’s teacher Mr Dan Williams, who was the one who noticed the seven year old’s symptoms on February 11 and phoned her mum.

That morning, Claudia had complained of difficulty swallowing but appeared to have no other symptoms and was her “usual bubbly self.”

Jayne said: “As a family we’re really grateful that (Mr Williams) was very quick in judging Claudia’s situation – he was the one that alerted her mum.

“He noticed and then he clarified it with another colleague to get their input, and then they called Claudia’s mum to say Claudia seemed like she was highly medicated and recommended we take her to hospital.

“The condition comes on very slowly so you wouldn’t notice at first and then you get aggressive symptoms.

“They told us at the hospital if we hadn’t brought her in then and we hadn’t noticed, she could have gone into a coma in her bed – I couldn’t even imagine that situation.”

Claudia’s funeral will be held on July 26. It will take place at Thornton Garden of Rest Crematorium at 2.15pm with a dress code of “colourful, fun, dressy, Disney or costumes”.