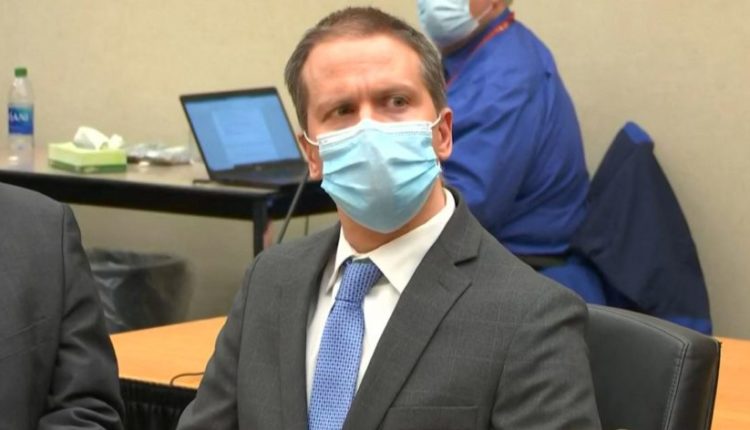 Former police officer Derek Chauvin has reportedly been placed on suicide watch in jail as he awaits sentencing for the murder of George Floyd.

A jury yesterday convicted the 45-year-old of second-degree murder, third-degree murder and manslaughter, with the verdict triggering cheers outside the Minneapolis courthouse.

He was taken away in handcuffs and put in a cell at MCF-Oak Park Heights, 25 miles east of the city he served as a law enforcer.

Chauvin will be closely watched by guards, and is considered a suicide risk as well as a potential target from fellow inmates due to his previous employment.

The disgraced cop faces a minimum of 12.5 years and a maximum of 40 years if he serves terms for each charge concurrently.

If served consecutively, Chauvin faces between 29 and 75 years.

He is expected to file a swift appeal, having reportedly scribbled his lawyer’s phone number on the palm of his hand before being led out of court.

Former Oak Park Heights warden Jim Bruton has said the hierarchy among inmates at the facility – where no prisoner has ever escaped – is determined by crimes committed.

Those at the top have killed a law enforcement officer, while child molesters are the lowest of the low, he said in a 2004 book.

Chauvin’s infamy as an ex-officer means he will likely be at increased risk of harm.

Prior to the killing of Mr Floyd on May 25 last year, in which he was filmed kneeling on his unarmed victim’s neck for several minutes before he died, Chauvin was subject to at least 17 complaints, according to police records.

But only one led to discipline.

Prosecutors sought permission to introduce eight prior use-of-force incidents, but the judge would only allow two during his trial.

In the end the jury heard none.

Eric Nelson, Chauvin’s lawyer, had defended his client’s use of force as appropriate in potentially dangerous situations.