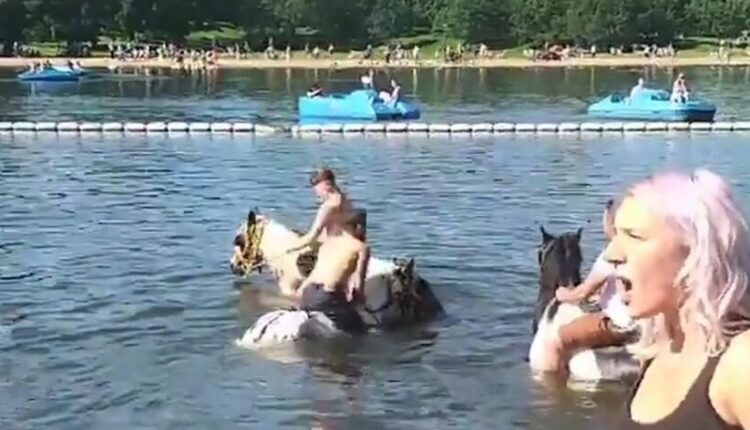 A fuming mum hit out at a group of shirtless men on horseback as they rode ponies into a Lido – despite them not being allowed to.

Footage taken at London’s Serpentine lido in Hyde Park shows the woman confronting the men as they took to the pond to cool off in last week’s scorching temperatures.

The men and their ponies unabashedly dive right into the Lido’s water and can be seen just feet away from parkgoers on peddle boats.

Video shared on Twitter by @Cabvision Taxi suggests the incident happened on Saturday June 5, when the UK was experiencing a heat wave and temperatures soared to 24C.

The footage, shared on the social media platform with the caption “chaos again in Hyde Park” , shows the mum hitting back at a few men standing on the shore while the others dive into the pond with the ponies.

One tells her to “shut up”, at which point she walks towards him and screams: “I will not go away.

The frustrated mum then yells to “get them [the ponies] out of the water”.

She then desperately turns to the crowd of onlookers to ask if “who else wants to see the horses out of the water”.

According to a Freedom of Information request seen by the Sun, ponies in Hyde Park are only allowed on roads and designated riding routes.

Yet they are not allowed on footpaths, cycle paths or grassed areas.

The group of men is then heard mocking the mum before one sarcastically offers to pay £50 for to get the ponies out.

The video shows the Met Police arriving at the scene.

It is unclear whether they intervened and the Mirror has approached the force for comment.

The Lido is a much-loved destination for Londoners in the summer with its paddling pool at the centre of the green areas of Hyde Park.

It is open over the weekends in May and everyday from June to September so Brits can make the most of the beautiful outdoor setting during the summer season.

The Metropolitan Police said in a statement they were called at about 16:30 on June 5 to reports of horses in the Serpentine.

“Officers attended and advised the horse riders that it was an offence to have animals in the Serpentine.

“They got out of the water and left the area.

“There were no arrests.”