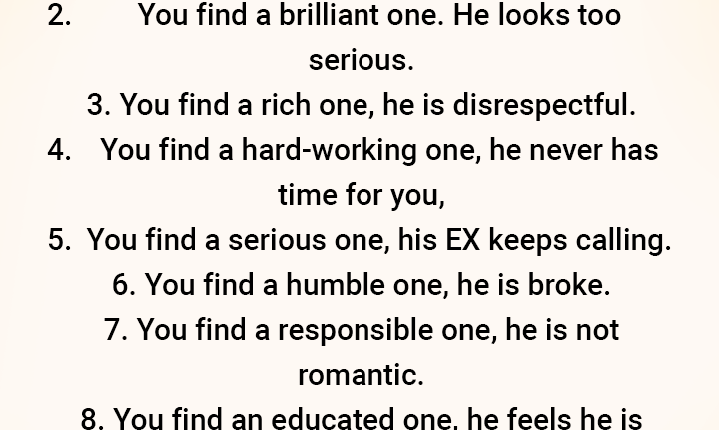 Finding a husband is Hard.

If we get straight to the point and skip the BS that’s only used to soften the blow of painful facts, we can admit it’s hard to find a good man. Even if we take our standards, expectations, and delusional hopes off the table and really look at the situation for what it is, we can clearly see that we are not to blame for the lack of good men. No, we have society who can take the blame for this one.

Unfortunately, our culture has evolved in a way that has made finding a good man tough ― and they certainly don’t make them like they used to. So, why is it so damn hard to find an awesome guy who’s going to treat you right and not bail the first time temptation comes his way? Here are nine reasons. 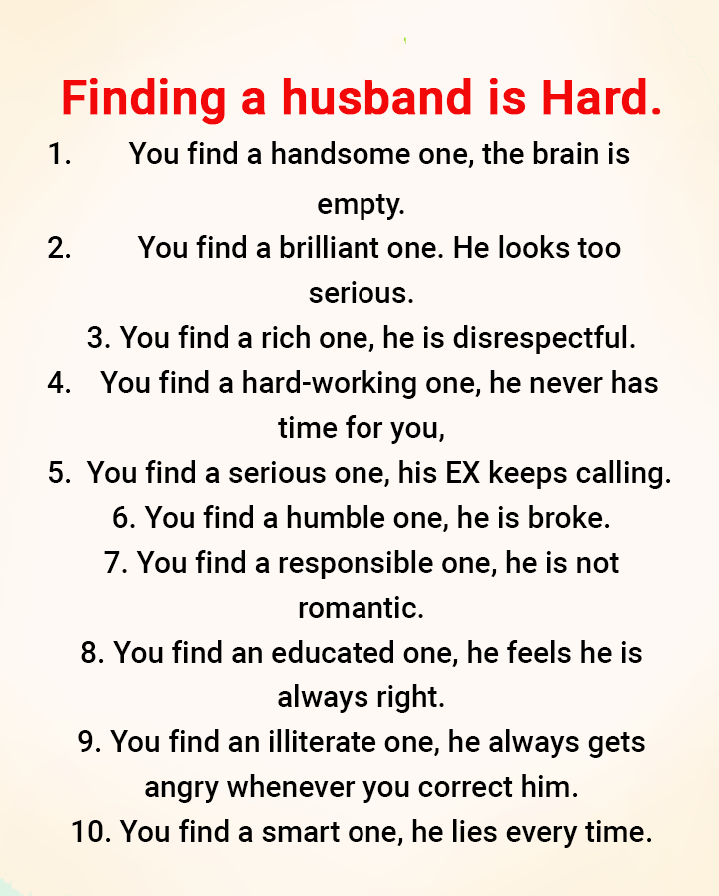 1. HOOKUP CULTURE HAS TAKEN OVER.

Although I would never knock hooking up, it has replaced dating and even relationships. Men don’t want to be with one woman only, if they have an entire buffet at their disposal.

2. PEOPLE HAVE TOO MANY OPTIONS.

While it’s good to have options, it can be bad when there are too many options. At any given moment a guy can sit down at a dating app and immediately have endless options of women from which to choose. Because of that, it’s hard for them to give one woman a shot for more than a hot minute.

3. THE BEST DATING/RELATIONSHIPS ADVICE ON THE WEB – SPONSORED
If you’re reading this, check out Relationship Hero, a site where highly trained relationship coaches get you, get your situation, and help you accomplish what you want. They help you through complicated and difficult love situations like deciphering mixed signals, getting over a breakup, or anything else you’re worried about. You immediately connect with an awesome coach on text or over the phone in minutes. Just click here…

4. LOTS OF GUYS ARE HOLDING OUT FOR SOMETHING “BETTER.”

It’s a sad thought, but in a world with so many options, people can become immersed in the idea that something better might be just around the corner. Because that’s the case, it’s hard to find a man who wants to commit when they’re thinking that the next woman they meet could be perfect ― whatever perfect is.

Once upon a time, people couldn’t wait to get married. Although it was likely due to the fact that they would finally be able to have sex, the reality is that these days people are in no rush to get married, so therefore, they’re in no rush to get into a relationship or settle down. And if a guy’s friends aren’t married, he sure as hell won’t be the first one to do it.

6. SOME MEN ARE INTIMIDATED BY POWER.

In comparison to the past few decades, women are more independent than ever. This success and power, for some reason, can be intimidating for some men who, perhaps, realize that they’ll never be the “man” his female partner is.

How can anyone possibly find a good man or anyone at all when we live in a world where technology rules and our most intimate relationships are with our iPhones? We can’t.

8. THE “MAN-CHILD” IS A LEGITIMATE PROBLEM.

A man-child is a just modern day term for a man who suffers from Peter Pan Syndrome: He does not want to grow up. If he grows up, he’d have to become responsible, get his act together, and even maybe find a girl and fall in love. Too many men just don’t want to do that.

9. EVERYONE HAS THEIR BAGGAGE.

No one is immune to having a rocky past, and sometimes that past can interfere with how that person moves forward ― if they move forward at all. Messy baggage can keep even the great guys in hiding for a long time.

10. BEING PHOBIC OF COMMITMENT IS ACCEPTED.

We live in a world where being scared of commitment has simply become the norm. If a man doesn’t want to commit, people are rarely surprised. Since that’s the case, they’ll just keep on skipping out on commitment and sticking to hookup culture, because it’s so accepted.