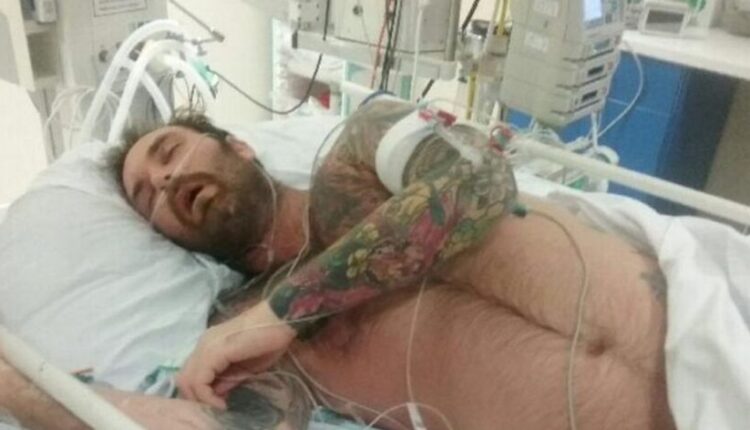 An ex-model died the day after his 34th birthday after enduring years of “excruciating pain”, an inquest has heard.

Brookin Johnson’s problems began when he was riding his moped on holiday in Thailand in 2015 and was hit by a truck. He had to have months of rehabilitation and surgery to save his foot.

The aspiring model, from Essex, was then able to return home and he was keen to continue his rehabilitation and kickstart his career.

However, just a week after his return home, on his way to the gym to continue his rehab programme, Mr Johnson was hit again in a second devastating collision, reports Essex Live.

Brookin suffered years of pain and had multiple hospital visits ( 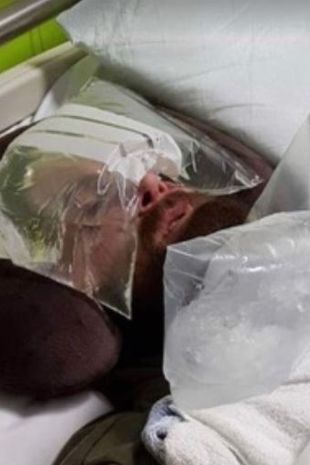 Mr Johnson, from Chelmsford, was left with chronic neck pain, burning sensations and pins and needles across his body.

Then, in March 2016, Mr Johnson suddenly collapsed, leaving him paralysed from the chest down.

At Essex Coroner’s Court in Chelmsford on Tuesday (July 27), the court heard how Mr Johnson suffered with “severe intractable pain” – later diagnosed as complex pain syndrome – and had multiple admissions to hospital with numerous complications following his paralysis.

From around 2019, Mr Johnson suffered several episodes of hyponatremia – where sodium levels in his blood became lower than normal, often caused by too much water in the body.

On February 3 2020 – Mr Johnson’s birthday – he was rushed to Broomfield Hospital after his friend and carer became increasingly concerned for his health.

Over the space of 24 hours, Mr Johnson’s health rapidly deteriorated with his breathing beginning to fail and suffering fits. 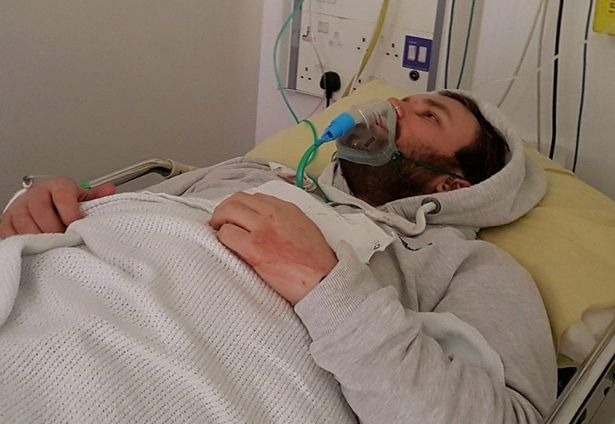 Despite the best efforts of medics, the 34-year-old was sadly confirmed dead the next day, on February 4.

Evidence from doctors and pathologists speaking during Mr Johnson’s inquest described the case as “complex” and “unusual”.

A post-mortem report confirmed that Mr Johnson had a “dangerously low” level of sodium and an extremely enlarged liver.

Brookin had to use ice packs to cool his burning sensations ( 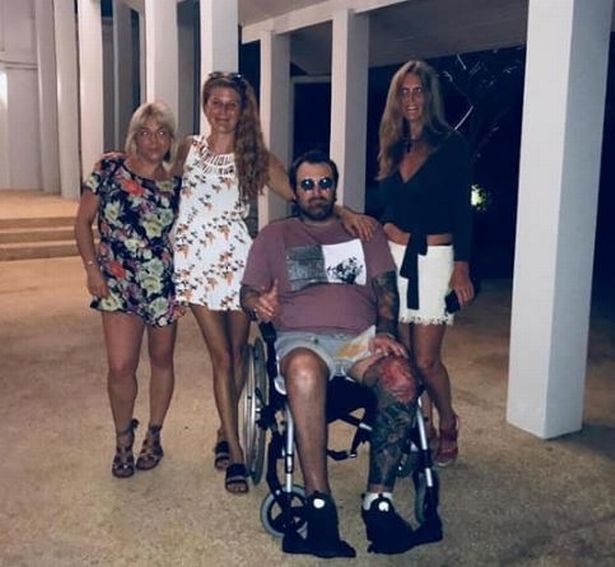 The court also heard how Mr Johnson had had an excessive water intake and an almost desperate thirst for water – as well as a mixture of concerns surrounding his alcohol intake during the last year of his life.

Dr Goddard, a consultant pathologist, told the court post-mortem findings showed Mr Johnson had been obese and had a massively enlarged liver of around 7,240g – when the average size is around 1,200-1,400g.

Even a breeze would hurt Brookin ( 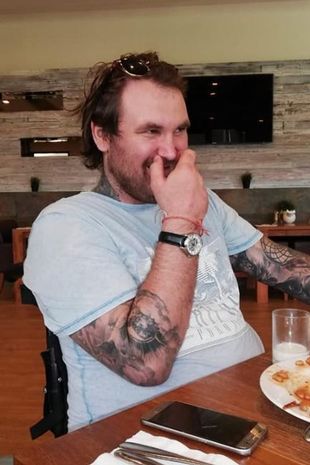 The doctor pointed to medical records showing he had suffered from polydipsia (excessive thirst) and hyponatremia (low sodium levels) – noting that excess fluid intake could dilute the blood and sodium levels.

Dr Goddard noted: “It would appear alcohol was one remedy that had some success as was the consumption of fluid.

“It was reported that he would drink several litres a day between two to five of water or more, nine on at least one occasion, consumed in a day.”

Brookin died the day after his 34th birthday (

Dr Goddard pointed to the alcohol consumption and obesity as possible factors of the fatty liver.

Mr Johnson’s mum, Jackie Rainbird, however, told the coroner that her son had taken good care of his eating and they couldn’t understand why he used to bloat so significantly.

She added they had consistently raised concerns regarding his excessive drinking to hospital staff but “weren’t getting answers”.

DI Jamie Mills from Essex Police told the inquest that a safeguarding referral was made by Broomfield Hospital on February 3, the day of Mr Johnson’s admission, and on February 5 – the day after his death.

The referral, he said, was surrounding a duty of concern around the severe fluid intake, given Mr Johnson’s mobility restrictions, and reports that Mr Johnson had drunk between seven to nine litres of fluid.

The court heard how Mr Johnson had a 24-hour care plan, where he was looked after around 40 different carers.

Brookin was involved in two collisions (

DI Mills said: “It was well-documented concerns he was consuming alcohol. It was listed that bottles were left by his bed and alcohol being decanted in bottles or alcohol being delivered to his address by Amazon.”

On a number of occasions, DI Mills said the care company raised concerns surrounding fluids being provided – however, the family told the court they also raised concerns themselves that carers had been giving Mr Johnson alcohol.

DI Mills stressed that Mr Johnson had full mental capacity and some physical capacity – noting that he would have been aware of the detrimental effect of excessive intake of fluid.

He concluded that there was “no other single person” who caused Mr Johnson’s death and they didn’t believe there were any criminal offences involving his care.

Regarding Mr Johnson’s alcohol intake, Dr Barry Evans, a consultant at Acute Medical Unit (AMU) for Broomfield, confirmed to the court that he had been treated for alcohol withdrawal during one hospital visit.

He added that documentation showed in one incident, it was recorded Mr Johnson had drunk an entire bottle of whisky.

Dr Yoganathan Suthahar, a practising clinician who was on duty on February 3, confirmed that on arrival on February 3, Mr Johnson had told doctors he was suffering with abdominal pain, fever and nausea. Tests showed he had very low sodium levels.

Mr Johnson was then placed on fluid restriction and later moved to the AMU before being rushed to ITU on the morning of February 4, after he began to rapidly deteriorate.

Dr Christopher Westall, a Broomfield Hospital consultant, told the court that despite near-maximum ventilation support, they were not able to clear the carbon dioxide from Mr Johnson’s system – a clear sign of respiratory failure.

Dr Westall noted that Mr Johnson showed “very unusual progression” over his rapid deterioration, adding “there are aspects which do not make sense.”

He added: “I think the concern is we may have been missing something.”

The court heard that a number of intensive care consultants were involved in Mr Johnson’s case, with colleagues asking for second and third opinions “because the story they are seeing in front of them isn’t adding up.”

Reading from Mr Johnson’s mother Jackie Rainbird’s statement, the coroner said she described Brookin as a “young man with so much energy and his ultimate joy was bringing people together”.

She said he was “infectious in character and hilarious” with “warrior strength and masculinity but also sensitive and sentimental”.

Prior to his paralysis, Ms Rainbird said her son had been a fit, healthy gym-user who loved music and sports. While the paralysis “devastated” him, she said, he was determined to recover.

“He couldn’t understand why he was deteriorating rapidly in complex pain,” the coroner read. “He used to say ‘the cocktail of medicines is messing up my body’.”

Ms Rainbird described the “debilitating” pain her son suffered including “excruciating sensitivity” where he would “scream” for no one to come into his room.

She added: “The windows were not opened at home because the breeze hurt him and he would lay in silence.”

If Mr Johnson was able to fall asleep, Ms Rainbird said he would “wake and scream to the pain”.

Ms Rainbird also criticised Broomfield Hospital for not investigating her son’s “terrible thirst or need for water” and felt his very low sodium levels were a huge concern that needed to be investigated.

She added: “It was hard to convince him help was on its way and we have come so far. His mental health was incredibly impacted by everyday life as he knew it to be.

“He felt they [the hospitals] couldn’t meet his needs because he was out of their care remit.”

Concluding the inquest, the coroner reiterated that Mr Johnson’s death was an “unusual case”.

He agreed that the hyponatremia – his dangerously low sodium level – and extremely fatty liver were key factors.

The coroner noted Mr Johnson’s hyponatremia “wasn’t something that came out of the blue” but had been developing over a number of days.

“I do accept the following cause of the hyponatremia was certainly in part due to polydipsia, drinking too much fluid,” he added.

The coroner ruled that Mr Johnson’s fatty liver was caused by at least a degree of excess alcohol.

He added: “There’s a reason he was drinking so much, it was his way of self-medicating his pain and what was a very unpleasant aspect of life with paraplegia and his way of coping.”

The coroner added Mr Johnson was a “young man full of life despite what happened to him.”