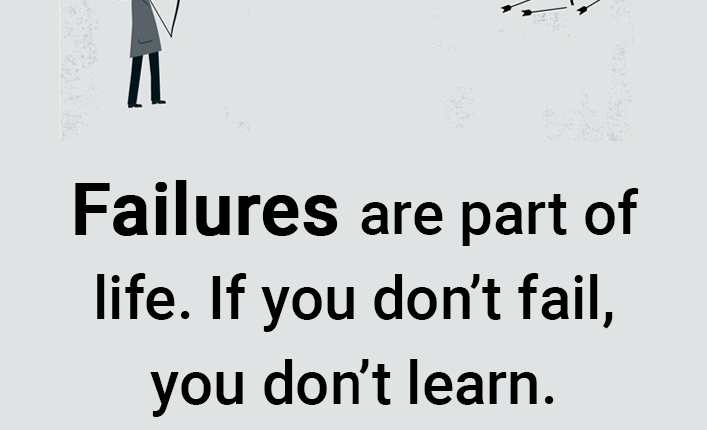 Failures are a part of life. If you don’t fail, you don’t learn. If you don’t learn, you’ll never change. So how do you look at failure? Do you crib about it? Do you feel ashamed because you failed? Does the environment spare you or does it brand you as a failure? Do you take extreme steps because of your failure? Is it normal to fail, will the society accept you?’ These are some of the questions that have tormented us, sometime or the other in our lives.

The above are some of the questions that have tormented us, sometime or the other in our lives.

Let us take the classic example of Thomas Edison, who failed at least a thousand times to invent the light bulb.

Answering a question on how it felt failing so many times, Edison said, “I didn’t fail a thousand times, but I took thousand steps to invent the bulb.”
His response suggests the positive outlook a winner must have in life.

If we can imbibe this positive outlook towards failure then success will be ours, sooner or later. Therefore, the approach towards failure has to change. Let us apply the L(earn) I(ntrospect) F(ocus)E(couragement) formula to manage failures and succeed in life with a positive mindset.

Learn
While we may learn from other people’s success and feel motivated, we sometimes undermine the effort behind it and the failures the person overcame to succeed.

A famous motivational speaker Zig Ziglar quotes, “Failure is an event and not a person.”
Whenever we fail the first step is to learn from it. For example, when a baby takes first steps and learns to walk, it falls down many times. The child never gives up, amidst the failures, it persists and succeeds. The parents never treat this as a failure but they encourage the child to walk. Each experience in life positive or negative teaches us something.

I have been maintaining a failure journal and recording my failures over the last few years. I have now see a pattern of mistakes emerging from it, and I’m now learning to change the behaviors and mindsets that caused me to fail in the first place

Introspect
Introspection and asking probing questions will help us to overcome failure and achieve success. Ask introspective questions such as, ‘Why did this happen?’ ‘What is the immediate take away from this situation?’ ‘What is the solution? Etc. Introspection helps us to unwind and reflect on many things that we should not have done. There was a time when a big telecom giant, once a leader and most successful mobile phone manufacturer in the world post 2010, ended up with losing market share. The Leader said, “We didn’t do anything wrong, but somehow, we lost”. They failed to see what was coming and the organization went downhill fast. A little introspection would have made them realize about the drastic changes happening around them. They lost the opportunity to sustain as a market leader and they faded away from peoples mind. The key questions to ask when we fail is, 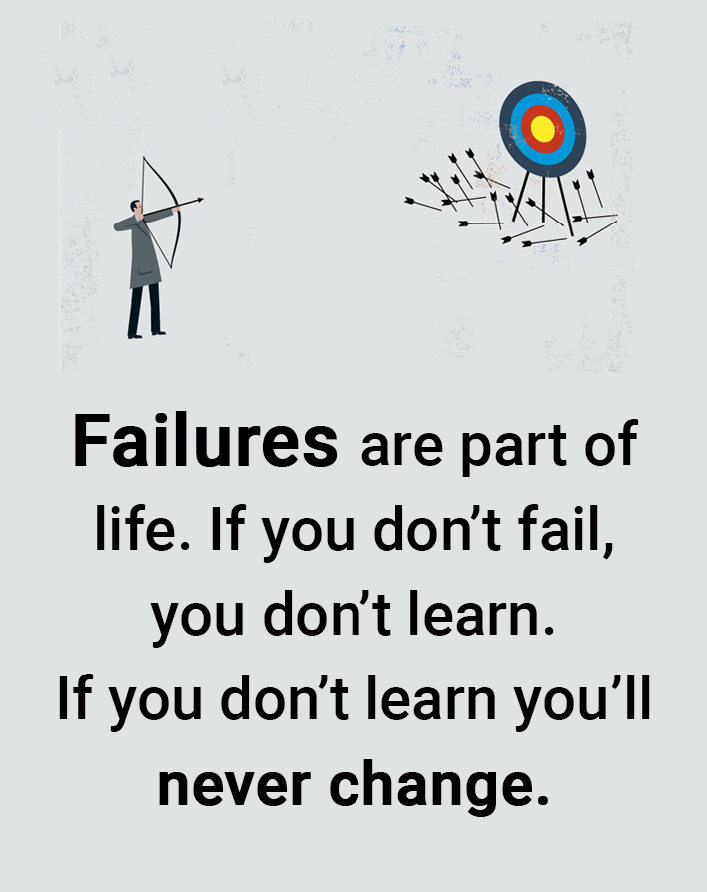 What can I do better next time?

What decision/s led to this failure?
There are many examples of ordinary people like Steve Jobs who were asked to leave their company but came back stronger with landmark innovations. Walt Disney was fired from a newspaper for not demonstrating creativity but he went on to become the most creative genius of the 20th century. These transformations happen because of introspection and our outlook towards failure and that could open doors to start winning again. Personally receiving feedback from peers consistently has played a major role in improving my facilitation skills. This constant reflective introspection has shown the path forward in influencing many people in my career.

Focus
“Happiness can be found even in the darkest of times, if only one remembers to turn on the light” – Albus Dumbledore
This quotation is a great inspiration for many people who have failed but not given up and succeeded in their life. Nobody ever knew about Dipa Karmakar, till she made history at Rio Olympics in gymnastics. Till then India had never represented in Gymnastics at the Olympics. Dipa has a flat foot, however this did not stop her from joining gymnastics coaching in Agartala. Her resolve to represent India in gymnastics and laser-like focus to achieve success helped her overcome every obstacle. She focused on practicing, in spite of the inadequate infrastructure, which led her close to winning a bronze medal. With humility, she apologized to the nation and said she will work harder to win a medal in the next Tokyo Olympics. Being an athlete myself, focus has helped me overcome failures and succeed.

Encouragement
There is an excellent book titled ‘It is okay to Fail Son,’ which emphasizes the importance of an encouraging/enabling environment. Nowadays with growing competition in every field there is a lot of pressure – at, home, school, college or work.

Nido Qubein – a management speaker, presents an example of a CEO creating an encouraging atmosphere to learn from failures. In one of the meetings, he puts a $100 on the table and starts sharing his failures. Encouraged by it, many people in the meeting start sharing their failures. The entire team felt that it was one of their best meetings. The CEO created the comfort and positive encouraging environment for sharing failures. He communicated that it is okay to fail and learn from failures.

We need to create a non-threatening environment so that people openly come up with new ways to succeed. People have encouraged me most of the times to push myself out of the comfort zone, which lead to the emergence of new initiatives and ideas. I have failed in some initiatives, which is okay with me. However, the satisfaction of exploring unknown territories has been a major win.

This culture is creating a positive impact and the message is reaching out to the employees, ‘It’s okay to make a mistake and fail.’

Matt Cameron said it beautifully, “Live LIFE to the fullest and always focus on the positive.”