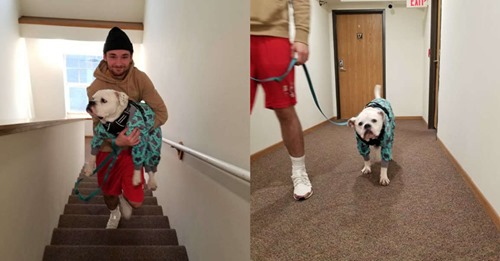 Dog Fakes A Limp Every Time He Sees Stairs

Titan was adopted by his family from Furry Friends Animal Refuge in Iowa at the end of August. His parents have had so much fun getting to know him over the past few months, and have learned that he’s pretty much the friendliest and most stubborn dog they’ve ever met.

“He has to say hello to EVERYONE when we go out,” Natalie Bretey, Titan’s mom, told The Dodo. “Everyone is his friend. While he does love being a big, friendly baby, he is also severely stubborn. He will frequently halt on walks until we go the way he has decided, or to stop and watch cars and people go by. We knew he was loving and friendly, but we had no clue how stubborn he was.”

Titan’s favorite thing in the world is going on walks, and his least favorite thing is when it’s time for his walk to end. He frequently tries to make his walks last longer, and he and his parents have already had many standoffs in the short time he’s been in their lives.

“He walks as if he has never had a walk before in his life,” Bretey said. “Which at first, may have been the case!”

Titan is 7 years old and does have a few health issues, including chronic ear ulcers, mild hip dysplasia and allergies. While his parents are actively addressing his ear issues, his hip dysplasia hasn’t acted up yet  — but they were worried it might be the very first time Titan encountered stairs.

“We realized he wasn’t a fan of stairs the very first day,” Bretey said. “We got back to my boyfriend’s apartment, and quickly realized that Titan had no intention of walking up the stairs. We started panicking; was this because of his hip dysplasia?!”

Titan’s parents were worried that his aversion to stairs might be because he was in pain — but quickly realized it was just because he didn’t feel like climbing them.

Now, every time Titan encounters the stairs, he tries to convince his parents to carry him up them. Sometimes he’ll even fake a limp, but as soon as his parents reach the top of the stairs and put him down again, the limp magically disappears and he runs down the hallway like the most athletic dog in the world.

“Titan pulls his limp trick at least once a week,” Bretey said. “This past week, he tripped on his new jammies going up the first step and stumbled back. He held his paw in the air and looked at me with the most pained look he could muster. I called his dad to come carry him up the stairs. Since he had stumbled this time, I was worried he wasn’t faking it for once! His dad came down and said, ‘He’s probably faking it again’ and hoisted him into his arms and up the stairs. Before we even reached the top, Titan was wiggling his way out of the set of arms and onto the floor. His limp was gone, and he jogged to the front door. We just laugh. He is a great actor!”

Titan’s parents are pretty sure he’d never encountered stairs before he came to live with them, and just never developed a taste for them. They’re very careful to listen and watch for any signs of actual pain and carry him up the stairs frequently — even though most of the time, it’s just Titan being Titan, but that’s OK. They love him enough to carry him anywhere.

When Titan was first adopted, there was a lot he had to learn about being a dog. His parents have absolutely adored watching him come out of his shell and explore the world around him. They want to give him the best life they possibly can, and are more than willing to put up with a little stubbornness along the way.

“We try not to think about all the things he went through, but have had fun watching him learn how to ride in a car, enjoy pup cups from coffee places, go on walks, and interact with everyone,” Bretey said. “His big heart has made every hard moment worth it.”

daily 1 Dec 5, 2020
Can you find the odd one out? The challenge below is a typical example of what my friends and I usually send to…

Only Geniuses Can Find The “Y” In Less Than 60 Seconds

Almost everybody gets it wrong on the first try: How many b’s are…

How many cubes are there?