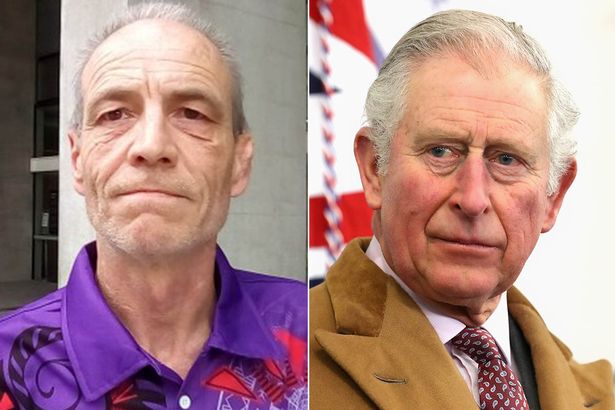 We’ve all had occasional dreams of grandeur, but one man is convinced he is no less than the son of the future king of England.

Australian Simon Charles Dorante-Day made headlines this week as he spoke out about his continued quest to be recognised as the secret love child of Prince Charles and Camilla.

Appearing on This Morning, the 55-year-old added to his long list of extraordinary claims, suggesting his eyes and teeth were altered as a young child in a far-fetched cover-up.

His remarks were met with raised eyebrows by Holly Willoughby and Phillip Schofield, who interjected: “Holly’s got blue eyes but she’s never made any claims on royal descent.”

From Princess Diana “knowing of his existence” to his 14-year-old son’s resemblance to the young Queen, here is how the British-born engineer has convinced himself his blood runs purple.

Simon was conceived in 1965, when the Prince of Wales was just 17 and the Duchess of Cornwall was 18.

Despite this being five years before the royal couple are understood to have met, the father-of-nine claims Camilla fell pregnant and kept it a secret.

During this period, he says, Charles was sent to Australia and Camilla disappeared from the public eye for nine months.

In actual fact, the Duchess was pictured at numerous points throughout the year, and was notably a debutante in London on March 25, 1965.

Born in Gosport, Simon was adopted by Karen and David Day when he was 18 months old.

He stridently claims his adoptive grandparents, Winifred and Ernest, worked in the Queen’s household – suggesting Ernest receiving an Imperial Service Award, although there is no official record of this.

“My grandmother, who had worked for the Queen, told me outright that I was Camilla and Charles’ son many times,” he told 7 News.

“We owe it to our children for them to have answers.

“At the end of the day, I’m just a man who’s looking for his biological parents – and every road takes me to Charles and Camilla.”

As a young boy growing up in Hampshire, Simon says he was taken to a number of impressive homes to meet his biological mother.

“I remember going to this house on top of the hill, and I was taken to the front door and my adoptive mother knocked on the front door – she never went in, I just went in,” he told 7 News.

Specifically, he claims one of the residences was none other than Broadlands House, then home to Lord Mountbatten, the uncle of Prince Philip.

Years earlier, the Queen and the Duke of Edinburgh had enjoyed their honeymoon at the estate in 1947.

“I have clear memories of being taken – and being left by my adoptive parents – to this residence in Hampshire,” Simon said.

“I only stayed there for a few hours at a time, but I was there multiple times. I believe I could draw a plan of the home layout, I know it so well.”

Unfortunately, Simon recalls his adopted mum and grandmother saying that the “visitations needed to stop”.

“I was walking to my nan’s [house] when I was about five or six and I heard nan say to mum, ‘Well, the visitations have got to stop, he’s going to remember them’,” he told This Morning.

“I walked in the door and said, ‘Remember what?’ and of course I copped a mouthful for talking out of turn.”

He told Holly and Phil he may have even undergone a procedure when he was eight years old to change his eye colour from blue to brown – to make him look less regal.

“I don’t think that they had any choice but to do that,” he said. “But it was because of the gossip in Portsmouth around the time. In those times, blue and blue made blue. There was never any inquisition about that.

“So my oncologist will tell you that one of my lenses is perfectly round and one of them is oval shaped like a football – a rugby football. So this is why I have a vision problem.”

He continued: “So something was done to my eyes.”

Phil poured cold water on the idea, revealing that the ITV show had spoken to a specialist at Moorfield Eye Hospital who said they didn’t know the procedure that Simon was referencing and that it would have been incredibly dangerous in the early 70s.

‘Same bone structure as the Queen’

Simon has a popular Facebook page in which he posts ‘proof’ of the alleged royal cover-up.

Often, he shares pictures of his wife Elvianna and their children, who live with him in Queensland, noting eerie similarities between his family and the Firm.

“Someone had commented on my facial bone structure being the same as Her Maj,” he once posted. “The Camilla-style hair doesn’t miss.”

Earlier this month, he also posted a side-by-side comparison of his son Liam, 14, and the young Queen, saying they were “blown away when we first saw it”.

“Elvie and I feel like we see many members of the Royal Family in our children, but this one was an eye opener,” he added.

“One of my supporters did the comparison and sent it to me and I was speechless.”

Simon has dismissed his birth certificate as “complete rubbish”, saying the names of his birth parents are “fictitious” and that his adoption documents are written in his mum’s handwriting.

Speaking to the Australian TV show Sunrise, he said there is “lots of bits of evidence” like this he wanted to pursue through handwriting analysis.

“I have a lot of evidence and I’m slowly collecting more. The longer this thing runs the more they are going to get it on their face, not me,” he said.

He also says the hospital written on his birth certificate didn’t deliver a single baby during the decade he was born – but has not revealed which institution this was.

Diana ‘would have told truth’

Perhaps his most outlandish remark is that Princess Diana was aware of his heritage and was planning to make the bombshell revelation before her tragic death in a car crash in 1997.

“We believe that Diana knew of my existence and that she had put the pieces together,” Simon told Australian magazine New Idea.

“I think Diana was at a point where she was finding out answers about her life, how she was wronged, and she was going to go public with it.”

In no interview did Princess Diana ever acknowledge the existence of Simon Charles Dorante-Day.