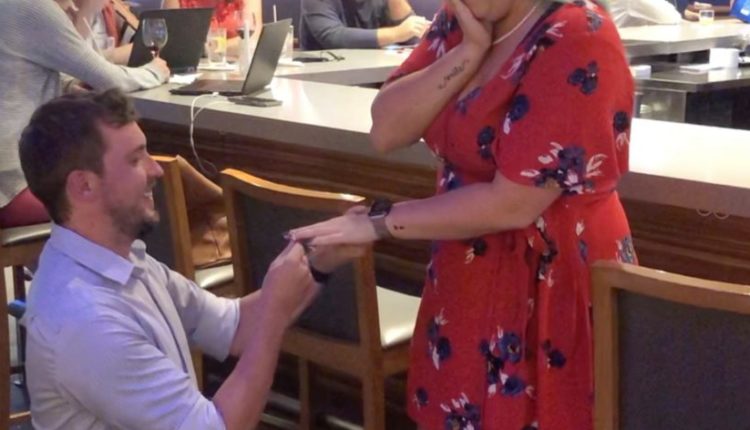 THIS cheeky couple FAKED their engagement as a ploy to swindle strangers of free drinks – and it WORKED.

Corinne Miller, 29, went on a trip with then boyfriend, Adam Carroll, 28, last July for her birthday to Atlanta where he got down and one knee to pop the (fake) question.

The couple had only been together for one month at the time, and hatched the ingenious plan on the spot.

Corinne and Adam, from Pratville, Alabama, got the bartender and one fellow bar-goer in on it and the plan was set into motion.

As a result, they managed to get free shots from several different strangers and even carried on to another bar where they were bought more drinks as they were celebrating their “engagement”.

Hilarious snaps show the smartly dressed couple, with Adam down on one knee and Corinne expertly playing the blushing bride-to-be.

And in a clip of the fake engagement, the couple can be seen in absolute hysterics as they carry out the tongue-in-cheek prank.

Adam then stands up and they hug before quickly turning towards the bar where they say they received a number of free shots.

Several drinkers in the background stare on open mouthed at the scenes.
But now, six months down the line, Adam, who works in sales, finally popped the question (for real this time) in front of all of their family and friends at his birthday party to which Corinne, a photographer, of course said yes.
Corinne said: “We both have the exact same humour- that’s one of the main components of our relationship.

“People started buying us shots and congratulating us- it was hilarious and definitely a great way to get free drinks.
“It has definitely been a whirlwind romance. We were best friends for eight years before we were a couple and that trip to Atlanta was actually one of the first trips we had been on together.
“I’m happy we did it – it definitely saved us some cash so Adam could get me a real engagement ring!”