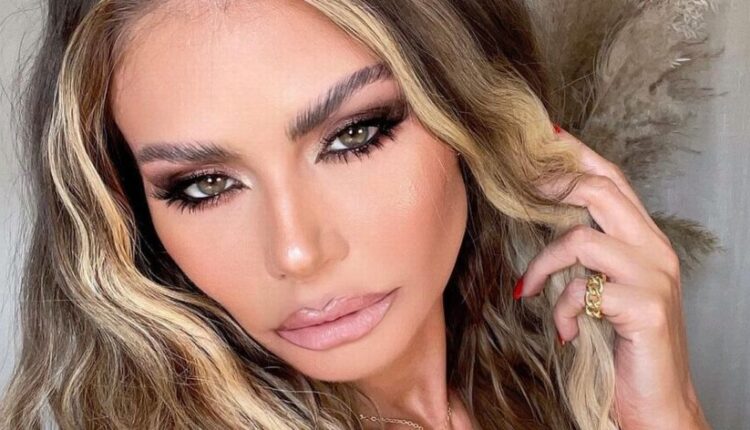 Chloe Sims has revealed she is having the filler in her face dissolved as she takes steps to return to her natural beauty.

The TOWIE star, 38, has made no secret of her love of cosmetic procedures in the past, but admitted she wanted to tone down her appearance in a bid to boost her confidence.

Chloe is following in the footsteps of a number of reality stars, including Love Islands Molly Mae Hague, who are turning their back on the plumped-up fake look to let their natural selves shine.

Sharing her progress so far on Instagram, Chloe uploaded three selfies showing her changed face with her pout decreasing in size with every trip to the clinic.

“So I decided to remove my fillers… the first photo is before, the second is without filler and the third is my more natural look…” she revealed.

‘I’m really happy that I’ve toned it all down and as you know I think it’s important to be honest with things like this. It’s my personal choice and that makes me feel confident. Thanks Vogue Aesthetics, she added.

In December, Chloe was mocked by cruel trolls who made jokes about her cosmetic enhancements.

Taking to Instagram, Chloe said she’d been forced to delete some of the most hurtful comments from her profile.

Chloe hit back saying she was tired of having to deny having surgery on her face, but admitted she has had other cosmetic work.

“Surgery is changing the structure of your bones in your face. I’ve had cosmetic treatments, yes, but that’s not surgery. People keep going “she needs to get her mental health checked, she’s had too much plastic surgery on her face”.

Then one woman goes ‘you’ve had too much Botox you can’t move your lips. You can’t have Botox in your lips, you thick p***s.”

“How embarrassing. If that was one of my relatives I would disown them. I get by with this face. I like my face. So there you go,” she said.

The natural trend of reality stars embracing their natural looks has been adopted by Love Island star Molly Mae Hague.

Over the last year Molly has removed her lip filler, veeners and taken out her dramatic hair extensions.