Boy, five, is abandoned at a KFC by his mother for having Autism - Daily Net 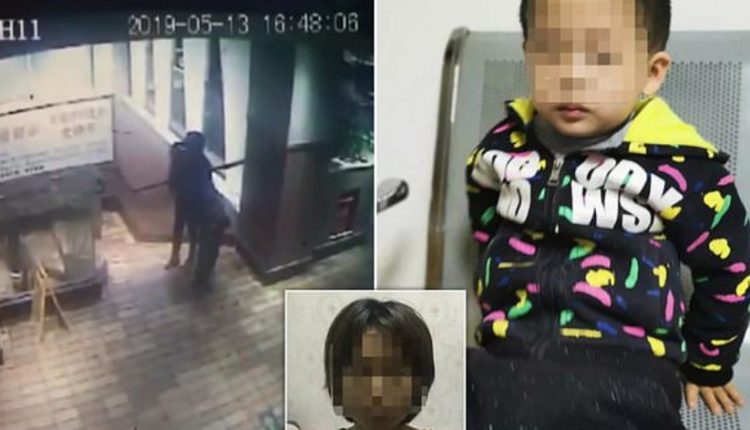 Boy, five, is abandoned at a KFC by his mother for having Autism

A five-year-old boy with Autism has been abandoned by his mother at a KFC chain in a train station in China.

The child was found sitting on his own while eating French Fries believed to be left over from other customers by staff at the fastfood chain.

His mother, 28, claimed she could no longer afford to raise her son after her husband walked out on them three years ago, according to a note found by police in the boy’s pocket. 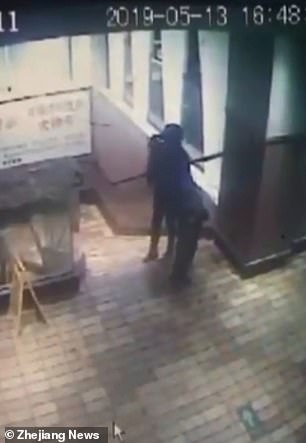 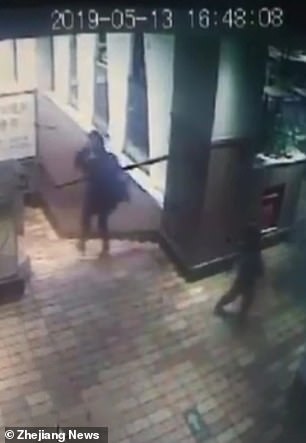 CCTV footage shows the mother taking the boy to the fastfood chain, seeing him walking into the dining area before turning away and leaving the restaurant in Hangzhou, China

The boy, known as Le Le, was abandoned at the KFC chain at Hangzhou Train Station in the provincial capital of Zhejiang on Monday afternoon.

His mother, known by her surname Ye, left the boy at the restaurant because ‘at least he would have food to eat and be found easily’, she told Hangzhou police.

Surveillance footage of the incident has been released by China’s Zhejiang News. 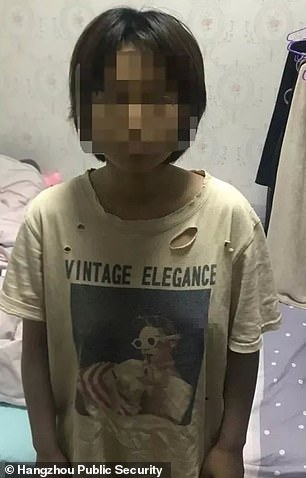 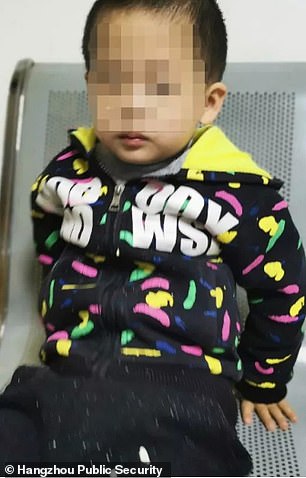 The child (right) was found by staff at the canteen while eating French Fries believed to be left over by other customers, said police. His mother (left) has been taken into police custody 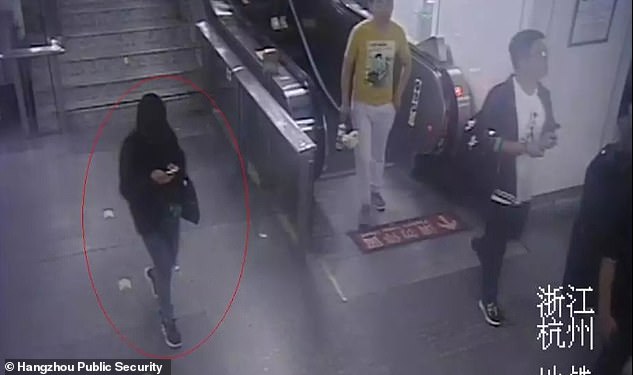 The clip shows the woman bringing the boy to a dining area upstairs. She stood with the boy by the stairs for a few moments. The boy then walked into the dining area. Seeing the child had left, the mother walked downstairs in the other direction.

Police said in an online statement that staff at KFC called them after noticing the boy had sitting by himself for a long time. Officers said they tried to ask the boy questions about himself, but he would not answer.

Eventually they found a note in one of his pockets. 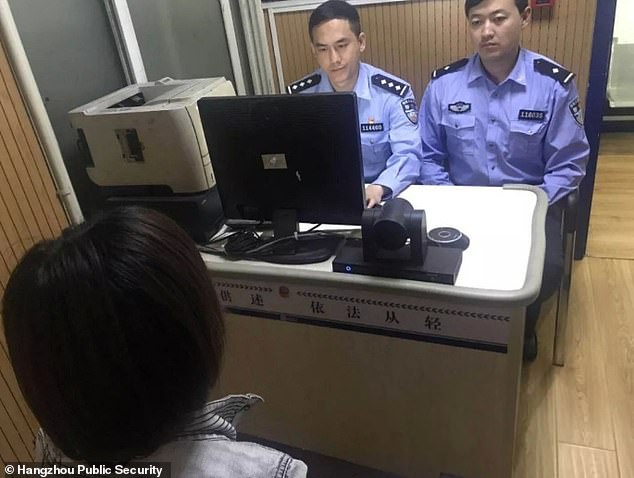 According to the note left by Ye, the boy has autism. She claims she has run into massive debts in order to pay for the boy’s therapy.

The note says she is forced to desert her son after feeling exhausted physically and mentally from bringing up the boy alone.

It also says Ye came to the decision after discovering that orphanages in China would only take in abandoned children, not those taken to them by the family.

The mother accuses that her husband had never shouldered the responsibility of raising their child and disappeared without a trace in 2016. The couple have divorced. 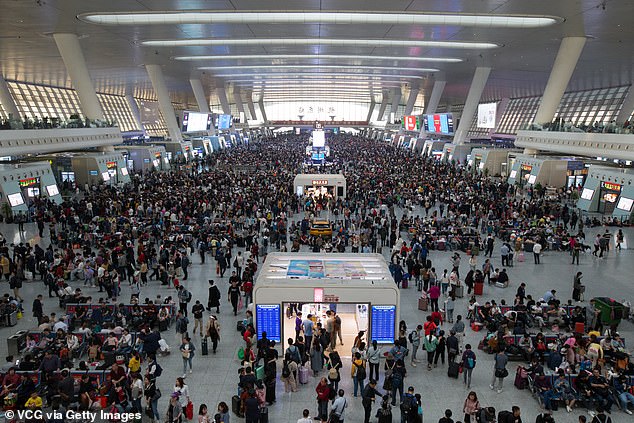 The boy was left at the Hangzhou Train Station (pictured), one of the busiest hubs in China 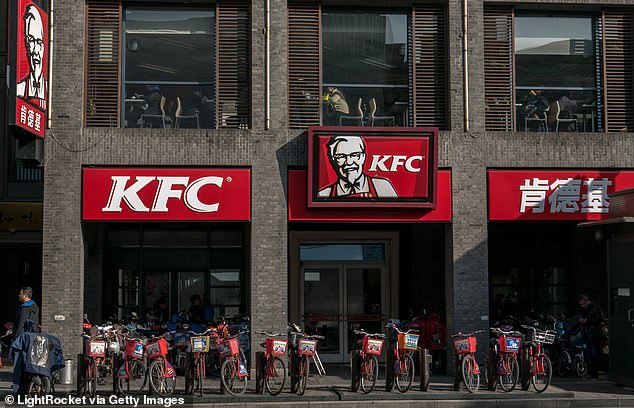 The mother said she left the boy at a KFC chain (file photo) because ‘at least he would have food to eat and be found easily’. She put a note in one of the boy’s pockets before leaving him

In addition, she has to pay for the expensive therapy bills for the boy.

It’s understood that the boy has non-verbal autism. Police said the child would not speak to them despite the fact that they had tried to ask him for his name and home address for hours.

Non-verbal autism is not an official medical diagnosis, but usually refers to the approximate one-third of sufferers who never learn to speak more than a few words.

Around one in 68 children in the US are on the autism spectrum. The condition affects approximately 695,000 people in the UK.

The Chinese healthcare system does not cover the cost of any therapy for citizens suffering from Autism. The general understanding of the condition is little.

Hangzhou police released the boy’s information and a picture of him on social media on Tuesday, hoping the public could help them find the mother.

They then located her and visited her in her home on Wednesday night. 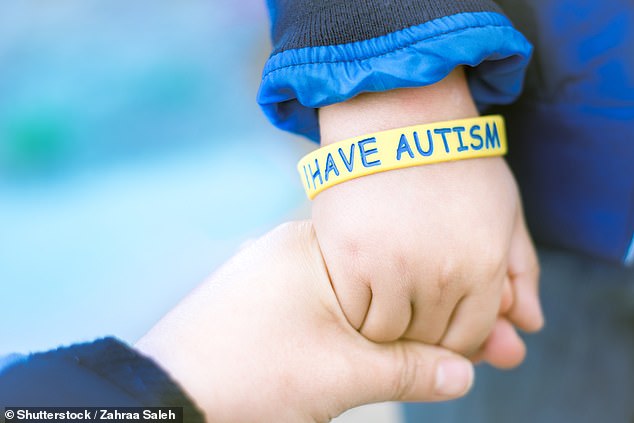 Officers informed her that her behaviour had broken the law and could lead to imprisonment.

The mother cried and admitted to the abandonment.

She told police: ‘I thought about it for a long time and this was the only way for both of us to survive. If I lose my job, we will end up starving to death.’

She said she was willing to be punished by law.

Police are still investigating the case. The boy is being looked after by Hangzhou Children’s Welfare Institute.

Ye has been taken into police custody, but it remains unclear if the mother will face any formal charges.

Under the Chinese criminal law, any parents who desert their children can be imprisoned for up to five years.

However in reality few of them are given punishment by the police due to a lack of law enforcement.