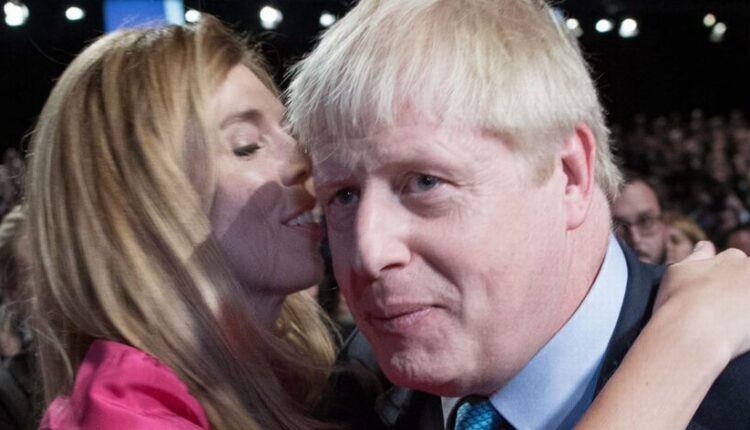 The PM, 56, exchanged vows with his 33-year-old partner in front of a select group of friends and family at Westminster Cathedral.

Guests are believed to have been invited at the last minute to today’s ceremony, with even senior members of Mr Johnson’s office said to be unaware of the wedding plans.

They had been planning the “cloak and dagger” operation for six months, it is claimed.

The couple have been engaged since December 2019 and have a son, named Wilfred, together.

They opted to hold the ceremony today in spite of Covid regulations – in place until at least June 21 – limiting the number of guests to just 30.

In an apparent red herring they reportedly sent out invitations for June 30 next year.

Number 10 tonight refused to comment when contacted by The Mirror.

The PM’s dad Stanley and siblings Rachel, Jo and Leo were in attendance, sources told The Mirror.

A guest told the Mail on Sunday: “You are not barking up the wrong tree. The couple will be making an announcement shortly.”

One person who was at the ceremony told the newspaper that Carrie looked “extremely happy” while the PM was “very smart and dapper….he didn’t take his eyes of her”.

The ceremony – the PM’s third marriage – was carried out by Father Daniel Humphreys who had given the couple pre-marriage instructions, and baptised their son Wilfred last year, The Sun reports.

Visitors at the cathedral, just yards from Victoria Station in central London, are said to have been ushered out the building with just minutes to spare before the couple’s arrival at around 1.30pm.

It is the first time since 1822 that a Prime Minister has married while in office – with Lord Liverpool the last to walk down the aisle while at the helm.

They were the first unmarried couple to live in Downing Street after Mr Johnson became PM in July 2019.

In an Instagram post announcing their engagement and pregnancy last year, Carrie wrote: “I wouldn’t normally post this kind of thing on here but I wanted my friends to find out from me… many of you already know but for my friends that still don’t, we got engaged at the end of last year… and we’ve got a baby hatching early summer.”

Labour leader Keir Starmer posted on Twitter: “Congratulations to Boris & Carrie. Whatever our political differences, I wish them a happy life together.”

Northern Ireland’s First Minister Arlene Foster was one of the first politicians to react to the news, tweeting: “Huge congratulations to Boris Johnson & Carrie Symonds on your wedding today.”

Meanwhile Speaker of the House of Commons, Sir Lindsay Hoyle, said: “What pleasant news. I wish the Prime Minister and Carrie well, and hope he has time for a honeymoon!”

He and Ms Wheeler have four children together.

His first marriage to Allegra Mostyn-Owen was annulled in 1993.

He proposed to his partner during a holiday to Mustique at the end of last year, which he says was paid for by Tory donor David Ross.

The Parliamentary Commissioner for Standards, Kathryn Stone, confirmed earlier this month that she is still investigating whether he properly declared the holiday on the private island 16 months ago.

The joyous occasion comes at the end of a troubling week for the PM, with former aide Dominic Cummings making a series of explosive allegations about his handling of the Covid crisis.

Among these were claims he said the virus “only” killed 80-year-olds, and he backed up claims Mr Johnson said “let the bodies pile high in their thousands”.

Mr Cummings also claimed that in February 2020, when the pandemic was becoming a major global crisis, Mr Johnson was “distracted by finalising his divorce, his girlfriend wanted to announce being pregnant and an engagement, and his finances”.

And yesterday a watchdog said it was “unwise” of him to have gone ahead with a controversial refurbishment of his Downing Street flat, which was overseen by Carrie.

The Tory lead has fallen by seven points in the wake of Mr Cummings’ evidence about Mr Johnson’s handling of the crisis, an opinion poll has suggested.

His approval rating has also slumped from +6% to -6%, the Opinium study found.

The poll put the Tories on 42%, down two points from a fortnight ago, with Labour on 36%, up five points.