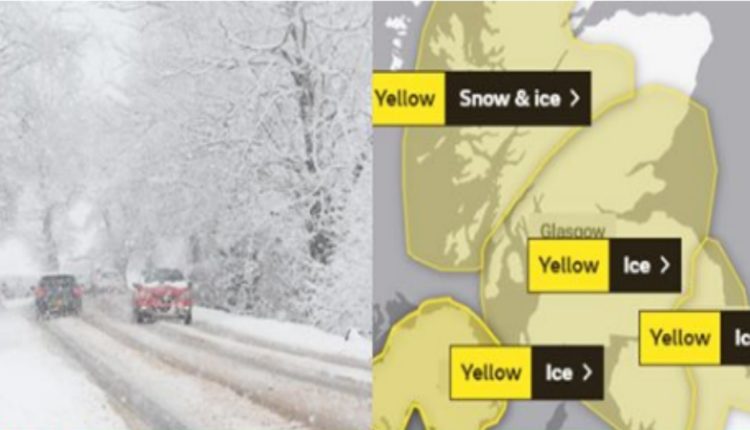 THE UK is bracing for a chilly start to the week, with as much as 15cm of snow set to fall in parts of Scotland while flood alerts have been issued across England.

The Met Office put out numerous yellow alerts for snow and icy conditions in northern Scotland this morning, with temperatures set to fall below freezing

Meanwhile, heavy wintry showers are predicted across southern parts of England and the Midlands with 33 flood alerts in place.

It comes after the Met Office issued severe weather warnings over the weekend, warning Brits to brace for snow, gales and wet weather coming from a Canadian “ice blast.”

By Monday, evening rain and sleet are expected to have moved across parts of Northern Ireland, southern Scotland and northern England.

Snow is chiefly expected to fall over the hills in northern Scotland, with as much as 15cm forecast, but could clear by Tuesday.

How to save £268 on your energy bills (Sponsored)

Why is it important to switch suppliers regularly?

Switchcraft lets you know every time you can save money by switching.

The £5 will be paid into your bank account within 120 days of completing the switch. *Prepayment meter customers will receive a £5 Amazon voucher. Open to those 18 and over. UK residents only. Click here for full T&Cs. News Group Newspapers Limited has a brand partnership with Switchcraft.

Roads and railways may be affected by the wintry conditions, with drivers and passengers warned their journeys could take longer than usual.

“Slow down and pack a blanket and snacks in case you get stuck.”

Cold air normally arrives from the east, like March 2018’s ‘Beast from the East’ – but weather maps show Canada’s cold air crossing the Atlantic and bringing an over 80 per cent snow risk around Glasgow.

Sub-zero temperatures are is due on Monday morning in Scotland, and the Met Office warned that overnight in Scotland could be colder than Britain’s -10.3C coldest night this winter, set on November 30 at Tulloch Bridge.

Scotland’s 500 road gritting lorries are set to be on duty.

Tuesday’s chill will be followed by gales of up to 50mph on Friday as most of the country faces rain.

The Weather Outlook forecaster Brian Gaze said: “There’s been almost no snow this winter for most – but the white stuff is finally on the way.

“A tongue of cold air is crossing the Atlantic from Canada, set to bring low-level snow.”

Met Office forecaster Simon Partridge said: “Cold air coming from off Canada brings the potential for the most widespread snow this winter on Monday.

“Low-level snow may well fall for the first time in parts of the North.

“We’re watching to see if we’ll issue further warnings for snow and ice on Monday night in the North.

“Monday morning looks like -7C in Scotland, and Monday night could beat the -10.3C coldest night this winter as temperatures fall over lying snow in Scotland.

“50-60 mph gales follow on Tuesday in the South-West as it turns milder, with 50mph gusts on Friday and Saturday as rain pushes across all of the country.”