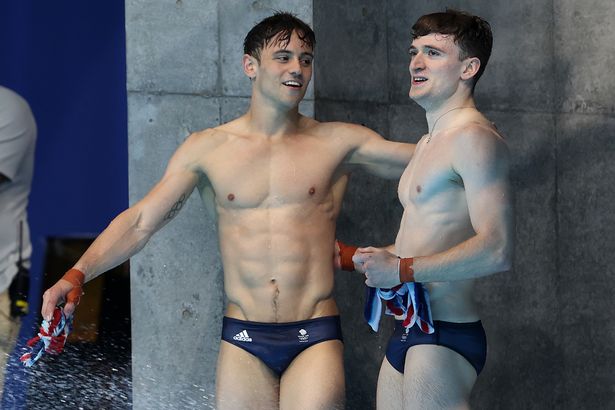 A jubilant Tom Daley wept tears of joy today after winning his first ever Olympic Gold.

He finally added an Olympic title to his impressive collection today in another triumph for Team GB with diving partner Matty Lee.

The pair produced a stunning display to beat hot favourites China with a series of sensational dives in the 10m synchronised diving at the Tokyo 2020 Aquatic centre.

It all came down to the last of six dives but with Daley and Lee watching from the sidelines, the Chinese pair could not do enough in their final dive.

Our sixth dive sent their coaches and supporters into rapture, with a forward four and a half somersaults enough to win gold going into the final round.

Daley, already with two Bronze medals, could not contain his emotions as he leapt into the arms of Lee – then received a hug from the Team GB coaches at the end of the competition.

Daley and Lee, 23, were neck and neck with Chinese pair Yuan Cao and Aisen Chen, the reigning Olympic champions, throughout.

The turning point came in the 4th dive.

With China ahead, their scores dropped from an early 10 to one 6.5 which saw the British pair move five points ahead into the Gold medal position.

A huge 3.7 difficulty forward dive with a dizzying 4.5 somersaults moved China back up the board – but it was not enough to reclaim the gold medal spot.

Instead, they moved to just 1.2 points behind the Brits as they entered the final round, and the Brits secured Gold with their final dive.

Now 27, Daley became Great Britain’s second youngest male Olympian in Beijing. He was the youngest person to win gold at the European Championships earlier that year.

The Devon diver has since won a combined total of 11 World, Commonwealth and European Championship gold medals, one of the finest records in the world.

He also has two Olympic medals to his name having won bronze in the 10m platform at London 2012 before adding another in the 10m synchro alongside Dan Goodfellow at Rio 2016.

Daley teamed up with Goodfellow again to win gold in the same event at the Commonwealth Games in 2018 before taking a break from competing.

After becoming a first-time parent with his husband, Daley has since returned to the diving board to achieve yet more success – both on his own and with new synchro partner Matty Lee.

It comes after Adam Peaty had won GB’s first gold of the Games earlier in the day by defending his 100m breaststroke.

The 26-year-old from Uttoxeter, Staffs, now living and training in Loughborough, brought home our first Gold of the Games in the 100m breaststroke – shortly after Team GB’s Alex Yee won silver in the men’s triathlon.

Peaty did it in 57.37 seconds, the fifth fastest time of all time, from Holland’s Arno Kamminga, with bronze going to Italy’s Nicole Martinenghi.

He punched the water and held his arms aloft as he celebrated his second Olympic title, smiling as his team mates sang his name.

Peaty swore live on air as he was interviewed just after the race, and apologised saying he was ‘very emotional’.

He said: “It takes an athlete to be the best person on the day and who f***ing wants it more.

“It just means the world to me. I thought I had the best preparation but the morning finals changed everything and threw that out of the window.”

He added: “I felt the pressure but I needed to put myself on edge. You can do whatever you want in your own pool but when it comes to being out here it’s not about a time.

“It’s like the four minute mile – once one person does it others do it. Thanks to the nation for being behind me for five years and my family and my beautiful boy.

“I knew it was going to take every bit of energy and I’m just so f** relieved. Apologies for the swearing!”