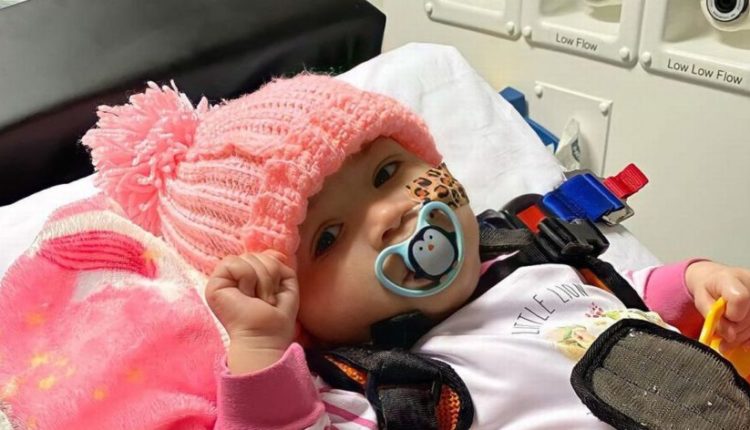 Ashley Cain has told revealed that he had to rush baby Azaylia to hospital on Sunday night after the eight-month old started bleeding from her nose.

The Ex On The Beach star, 30, posted to his Instagram story that he and partner Safiyya Vorajee, 34, had rushed their daughter to hospital on oxygen.

Ashley told his followers that the family were just on the way back from hospital.

He said that because his daughter has tumours in her head and organs and her blood cancer eats away at the cells that help to clot the blood, she could potentially bleed out from the inside, hence why her nose was bleeding.

He emotionally said: “That’s no way for Azaylia to go, especially as she’s been so lively and happy today so we knew what we needed and it was a platelet transfusion.”

He admitted that “every day is a blessing at the moment” and urged parents to “know your stuff”.

He revealed that the couple weren’t asking for bloods to be taken as doctors wouldn’t take bloods or perform any more treatment since their daughter had been discharged as no more could be done to help save the youngster.

But he said they knew what she needed and demanded the platelet transfusion to help clot her blood.

He said: “By taking pride in your child’s care and not leaving it to anybody else you know certain things that can preserve your child’s life or even give them an extra day or two days on this planet because every moment is precious and I want every parent going through this to understand that.”

He followed up with an image of Azaylia back home and added: “It’s been an incredibly intense time, but we’re now home safe.”

He finished the post by saying the pair were praying for a good night’s rest for their daughter along with the hashtag #LetsGoChamp.

Ashley told his followers the heartbreaking news on Thursday that his daughter wouldn’t be receiving any more treatment as doctors couldn’t do any more to help her fight the rare form of leukaemia.

The couple took their daughter home from hospital on Friday night to spend her final moments with them in normality.

On Saturday they celebrated their daughter turning eight months old and on Sunday Ashley posted an emotional message of support from Dwayne Johnson.