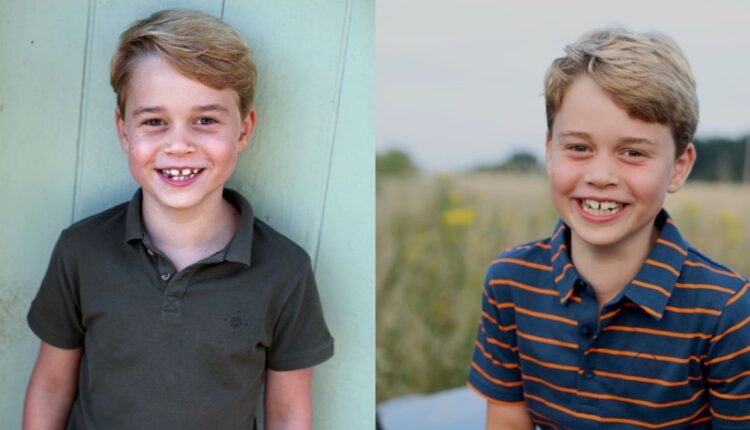 Prince George beams as he cheekily sits on top of his parents’ Land Rover Defender in a photo released for his eighth birthday today.

Including the famous vehicle in the image will be seen as a poignant tribute to the late duke of Edinburgh, who had a passion for engineering.

Philip, who died in April a few months short of his 100th birthday, regularly drove Land Rovers and during his funeral the duke’s coffin was carried by a specially adapted defender which he helped design.

The future king, casually dressed in a polo-style striped top and shorts, was snapped by proud mum Kate during a family break to Norfolk earlier this month.

The Duchess of Cambridge has become an accomplished photographer and in recent years has released her own pictures to celebrate her children’s birthdays.

Kate may have a passion for photography, but she has revealed her children sometimes wish their mother would put her camera down.

Speaking to a finalist of her Hold Still photography contest, the duchess said about George, Charlotte and Louis: “Everyone’s like, ‘Mummy, please stop taking photographs’.”

The little lad will be sure to get a home made cake from his mum, who has revealed she often has to stay up till midnight making them.

Previously appearing on the BBC special “A Berry Royal Christmas”, Kate confessed: “It’s become a bit of a tradition that I stay up ’til midnight with ridiculous amounts of cake mix and icing and I make far too much. But I love it.”

The future king’s godmother, Julia Samuel, 60, who was a good friend of Diana reveals that she buys ‘impossible’ toys for the youngster that William has to spend days carefully assembling.

She said: “I do to George what [Diana] did to us, which is give impossible toys that are really noisy and take a lot of making.

“William then has to spend days putting together. And then put all the machinery together, and it makes awful tooting noises and lights flashing and all of that.”

She revealed the heartwarming tradition when she was a guest on the podcast How to Fail with Elizabeth Day – in an episode last year to mark what would have been Diana’s 59th birthday.

Describing her adorable godson, she said he was “amazing” – adding her dear friend Diana would have adored him too.

Prince George was recently seen in public as he made an appearance at the Euros with his parents.

The sight of the young prince wildly celebrating England’s goal during the Euro 2020 final delighted football fans up and down the country.

And the way he clapped along with his dad Prince William, hugged his mum, the Duchess of Cambridge, and was then consoled by them after England’s heartbreaking penalty shoot-out loss shows they are a family full of love and affection, according to a parenting expert.

He was seen experiencing a rollercoaster of emotions during the tense match at Wembley.

And Georgina Durrant, author of the book 100 Ways Your Child Can Learn Through Play, said the way that Prince George was often seen mirroring his parents’ behaviour shows how he sees them as his role models.

He made his public debut in front of the world’s media on the hospital steps one day later, wrapped in a white merino wool shawl, cradled in his proud parents’ arms.

A great-grandchild to the Queen, he will be the 43rd monarch since William the Conqueror obtained the crown of England if, as expected, he follows the reigns of his grandfather, the Prince of Wales, and then his father, William.