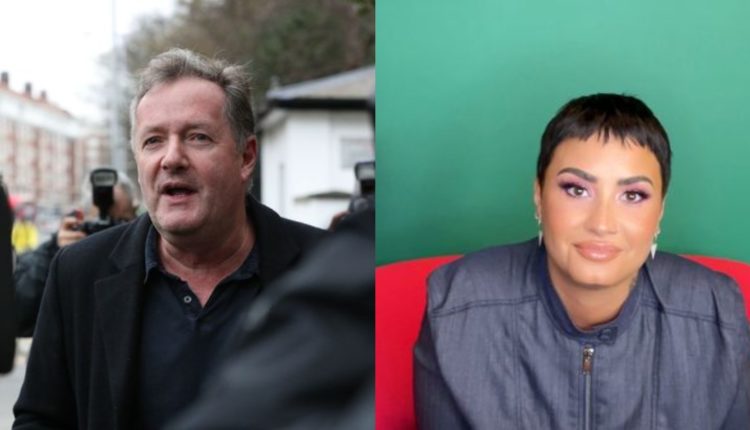 The 56-year-old former Good Morning Britain star, who said he had often been a customer at the LA-based yogurt store, jumped to their defence following the social media exchange.

It came after Demi took to Twitter over the weekend and demanded that the store ‘do better’ to support those that are struggling with eating disorders.

She also said that she would start calling out companies that were using ‘harmful messaging’ and encourages ‘disordered eating’.

Demi wrote at the time: “Finding it extremely hard to order froyo from @thebiggchillofficial when you have to walk past tons of sugar free cookies / other diet foods before you get to the counter. Do better please”

She then wrote in a second post: “So, I think I’m gonna have to make that hashtag a thing. I will be calling harmful messaging from brands or companies that perpetuate a society that not only enables but praises disordered eating.”

While The Bigg Chill then responded to Demi and apologised for her feeling offended, they also pointed out that they catered to all of their customer’s needs. The company added that they carry a host of items to cater for diabetics, celiacs, and vegans.

The Bigg Chill responded to Demi: “We are not diet vultures. We cater to all of our customers’ needs for the past 36 years. We are sorry you found this offensive. We carry items for Diabetics, Celiac Disease, Vegan and of course have many indulgent items as well.”

Demi then went on to slam the company for ‘terrible’ service and said that the whole experience was “triggering.”

From secret feuds and sexy scandals to the biggest showbiz headlines – we’re serving up a daily dose of gossip.

It didn’t take long for Piers to wade into the spat and penned his thoughts about Demi’s ‘woke’ perspective in his recent Mail Online column.

“I was triggered by Ms Lovato herself,” he wrote.

“The more this repulsively arrogant woman attacked this lovely little store in her staggeringly unhinged and delusional manner, the more furious I became.”

He then went on to suggest that Demi had attempted to crush the family-run company by wielding her power of millions of social media followers.

Piers continued: “I find idiot celebrities like Demi Lovato ‘triggering’ and require THEM to ‘Do Better Please.”

It’s certainly not the first time that the often outspoken former GMB star has taken aim at ‘woke’ celebrities on his social media platforms.

While several Twitter profiles appeared to side with Piers’ perspective on Demi’s recent social media posts, others have branded his latest column ‘hateful’.