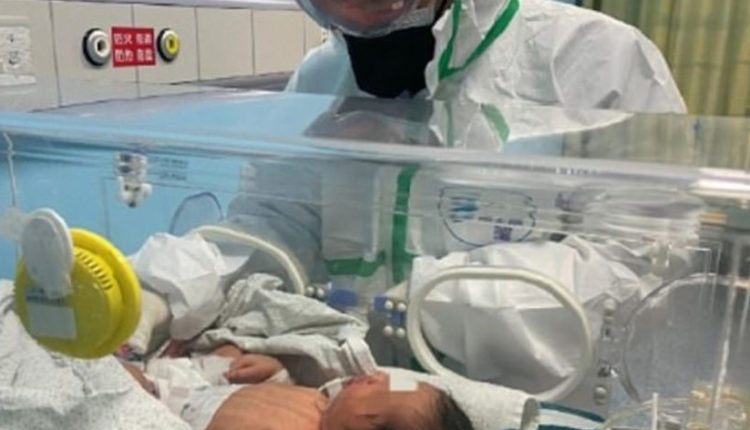 A NEWBORN baby has become the youngest victim of coronavirus – after being diagnosed at just 30 hours old.

The infant was born in the Chinese city of Wuhan – where the outbreak began – on Sunday.

Doctors said the baby’s mother had tested positive for the new killer illness before she gave birth.

State media outlet Xinhua said that the baby, who weighed 7lbs 2oz, was now in a stable condition and under observation.

It’s unclear how the virus was transmitted – either in the womb or after birth, when the baby’s immune system is yet to develop.

Medical experts in China told news agency Reuters that the womb could be a possible route of transmission.

But experts say that the baby may have picked up the virus from his mother shortly after being born.

Stephen Morse, an epidemiologist at the Mailman School of Public Health at Columbia University, told Business Insider: “It’s quite possible that the baby picked it up very conventionally – by inhaling virus droplets that came from the mother coughing.”

Prof Paul Hunter, Professor in Medicine, University of East Anglia (UEA), said: “When a baby is born vaginally it is exposed to the mother’s gut microbiome, therefore if a baby does get infected with coronavirus a few days after birth we currently cannot tell if the baby was infected in the womb or during birth.

“There have been reports of MERS and SARS in pregnant women in the literature and pregnancy does appear to be a risk factor for more severe disease but not necessarily of transmission in the womb.

“One study found that SARS during pregnancy is associated with high incidences of spontaneous miscarriage, preterm delivery, and intrauterine growth restriction.

“There is no evidence of perinatal SARS infection among infants born to these mothers.

“This foetal loss may be more to do with the severe illness in the mother than a direct result of infection on the foetus.”

Cases of the new coronavirus in children are “rare” and only a handful have been infected.

A report by the Journal of the American Medical Association (JAMA) said the median age of patients for the current outbreak is between 49 and 56 years.

In Singapore, a six-month-old baby has tested positive for the new coronavirus, as well as an eight-year-old from Wuhan, who is currently in Australia.

The death toll from the killer virus has now hit 563 with more than than 28,000 people infected.

Cases have spread to 25 countries with a total of 191 cases outside of China.

They include three in the UK after public health officials today announced a third person had caught the virus.

It’s understood they didn’t contract coronavirus in the UK.