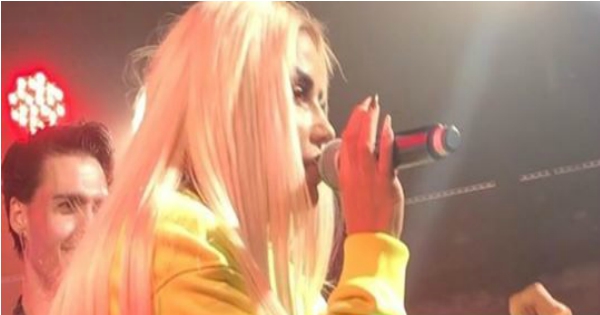 Katie Price’s boyfriend Kris Boyson is said to have dumped her following her raunchy, naked night out last week.

The former glamour model, 40 shocked club goers as she bared her breasts on stage and shamelessly talked about her ex Dane Bowers’ small manhood.

And personal trainer Kris is said to have ended things not long afterwards, branding her a “tramp” during a furious argument on Friday.

The row took place after the pictures from Katie’s stage appearance emerged, in which a drag queen can be seen licking her bare breast.

Plus, in footage which has since gone viral, Katie could also be heard bellowing to the crowd: “I was with Dane Bowers. Do you know what, it doesn’t matter about the size.”

An insider told The Sun : “Kris was mortified when he saw the pictures of Katie at the event and on Friday he decided he had enough.

“They had a furious row about it all and Kris called her tramp and told her she had embarrassed him beyond all belief.

“He admitted he was an idiot thinking she would ever change and said he feels completely betrayed by her.”

The source added that Katie was shocked at Kris’ reaction, and insisted that having her nipples licked isn’t cheating, and her x-rated comments were purely to hype up the crowd.

Despite Kris’ initial fury and certainty they were over – even unfollowing her on Instagram – Katie eventually managed to win him round, and the pair are now back together, and heading on a make or break holiday in Turkey.