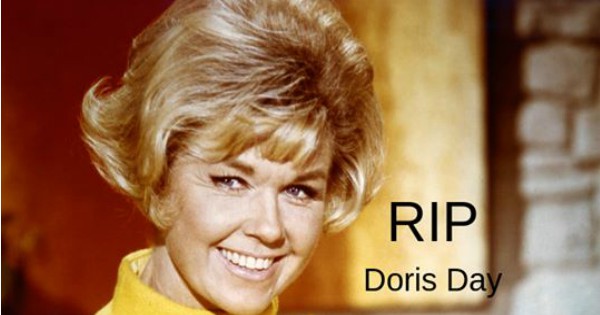 The Doris Day Animal Foundation confirmed the news that Day, one of the last surviving stars of the Golden Age of Hollywood, had passed away early on Monday at her Carmel Valley home in California surrounded by friends.

According to the charity, the retired showbiz icon had ‘been in excellent physical health for her age’ until only recently contracting a serious case of pneumonia.

Day is survived by one grandson.

While she retired from the limelight in recent years, golden girl Day had enjoyed a glittering showbiz career that lasted more than eight decades.

The legendary actress and singer – real name Doris Mary Kappelhoff – shot to fame in the 50s and 60s.

She began her career as a big band singer in 1939, but soon went on to become a huge star of the silver screen following a succession of hit movies.

Early films including Pillow Talk, Love Me or Leave Me and The Man Who Knew Too Much made Day a household name.

She went on to become one of the biggest female stars in the 60s and in 2011 released her last album My Heart, which featured a collection of unreleased music.

One of Day’s best-loved roles was in the title role of Oscar award-winning 1953 western-themed musical Calamity Jane.

The song Secret Love from the movie gave Day her first Number One hit in the UK – and her third in America – and was then awarded the Academy Award for Best Original song.

During the same period, Day also had her own radio program, The Doris Day Show, which broadcast on CBS between 1952 and 1953.

Day became even more popular in the 60s following a string of highly successful romantic comedies – with the platinum haired actress taking on the lead roles.

The Box Office hits began with 1959s Pillow Talk, quickly followed up by Move Over, Darling and The Ballad of Josie.

Though when her third husband Martin Melcher passed away in 1968, Day discovered that he had squandered her earnings and committed to a television series without her knowledge.

Speaking of the show which went on to become The Doris Day Show, the actress told OK! Magaazine in 1996. “It was awful. I was really, really not very well when Marty [Melcher] passed away, and the thought of going into TV was overpowering. But he’d signed me up for a series. ”

The show enjoyed a five year run between 1968 and 1973 – with the iconic Que Sera, Sera as it’s theme tune – as Day worked to pay off her debts.

After the show came to an end, Day largely retired from acting, aside from TV specials on her career and was given her own talk show in 1985 that was cancelled after just 26 episodes.

After largely retiring from the limelight, Day continued to pick up numerous accolades for her silver screen work.

In 2004 she was honoured with the Presidential Medal of Freedom, presented to her by George W. Bush.

Then in 2011 she was awarded the Los Angeles Film Critics Association’s Career Achievement Award.

In 2017, Day discovered that she was actually two years older than she believed after a bizarre birth certificate blunder came to light.

The truth was revealed after official records noted that she was born Doris Mary Kappelhoff on April 3, 1922.

“I’ve always said that age is just a number and I have never paid much attention to birthdays, but it’s great to finally know how old I really am!” Day said in a statement at the time.

Day’s personal life is almost as colourful as her on screen persona.

The actress was married four times, first tying the knot with trombonist Al Jorden, who she met in Barney Rapp’s Band.

Following her divorce from Jorden, Day went on to marry saxophonist George William Weidler between 1946 and 1949.

Then on her 29th birthday, Day wed for a third time, saying ‘I do’ to American film producer Martin Melcher. The union lasted until Melcher’s death in 1968.

Day’s fourth marriage was to Barry Comden, the head waiter at her favourite restaurant. The pair married in 1976 and split six years later in 1982. Comden later complained that Day cared more for her ‘animal friends’ than she did him.