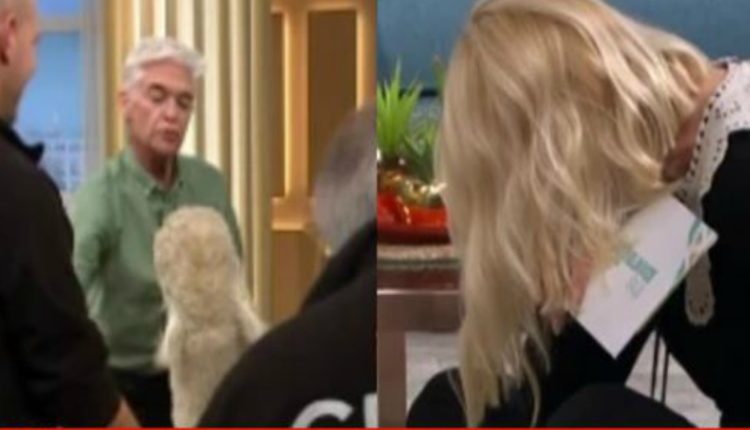 HOLLY Willoughby sank to the floor laughing after an alpaca spat in Phillip Schofield’s face live on This Morning.

Today’s show opened with Phil holding the aptly named Spitfire and Pete by ropes while Holly wisely kept her distance.

She explained the reason she was stepping back from the woolly guests was because moments before the programme began they showered Schofe.

Holly asked him what it felt like, to which a calm Phil replied: “It was warm and wet.”

But it didn’t stop there, with both Spitfire and Pete continuing to take aim at Phil, loudly gobbing in his direction.

Co-host Holly found it hilarious and dropped to the ground giggling.

Yesterday Holly shrieked shrieked in fear after a giant pig was left to roam the This Morning studio.

The 38-year-old leapt onto the sofa for protection while Phillip teased her.

The guest claimed the 15 stone pig named George made the best companion after she “swapped her husband” for the animal.

But as the hog entered the studio, Holly jumped onto the sofa in panic as George made his way around the table to get near her.

And while Holly was clearly terrified by the animal, Phil seemed intrigued as he puckered up for a kiss.

Phil, 57, crawled on the floor as he repeatedly asked the pig for a smooch.

Viewers took to Twitter to comment on the moment, with one user telling Holly to “grow up”.

A third said: “Watching Phil crawl on the floor and kissy kissy a pig is highlight of my day.”

This isn’t the first time Holly has been freaked out by an animal.

The host previously was left terrified by a crow, who wreaked havoc on the This Morning set in 2017.