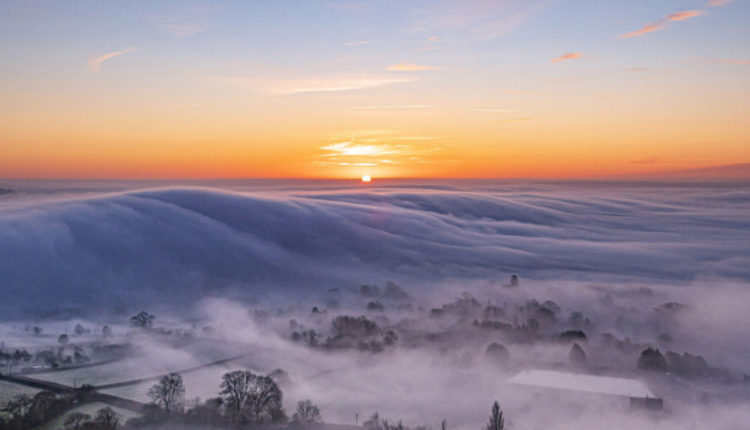 BRITAIN is set for a cold and foggy week as some areas may struggle to see temperatures rise above freezing late at night.

The Met Office said it has already issued fog warnings for parts of the West Midlands and north-west England to start the week.

The conditions come after The Met Office confirmed Northern Ireland experienced its coldest night of the winter.

Elsewhere, the temperature fell to -6.8C in North Yorkshire’s Topcliffe, and hovered around -1C across the capital over the weekend.

Despite the expected foggy conditions, most of the country is expected to see sunshine.

A Met Office spokesman said, “We could wake up to freezing fog on Monday,” adding “the temperature could also be down to -6 or -7” that night.

“During the day time the temperatures will be struggling to get into single figures despite the sunshine.”

But while the south of Britain will see cold dry weather, northern parts could see snow.

The Met Office forecast for the rest the month says: “Snow will be most likely over northern hills, but it could fall to lower levels at times, mainly in the north, during colder interludes.”

The cold snap comes after Storm Brendan lashed parts of the UK last weekend, causing road closures and rail disruption, along with winds of up to 80mph.

The low temperature has promoted a cold weather alert to be issued by Public Health England from 6pm on Sunday to 6pm on Tuesday.

The organisation is urging people to prepare for cold weather conditions and look out for those most at risk.

Dr Owen Landeg, principal environmental public health scientist at PHE, said: “Below 18 degrees, changes to the body mean that the risk of strokes, heart attacks and chest infections increase so heating homes to this temperature is particularly important to stay well.”