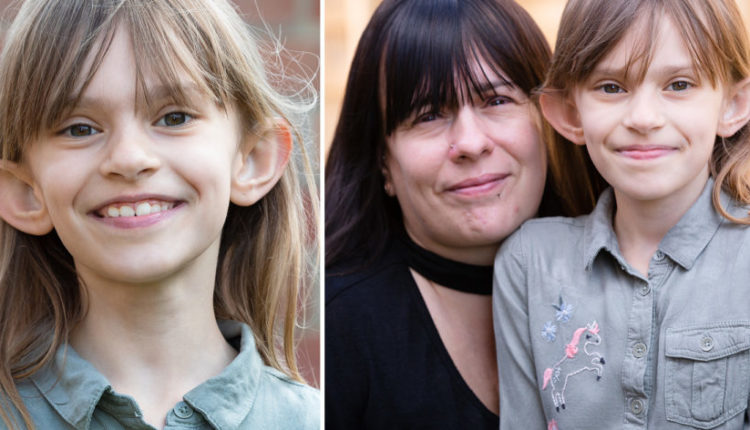 A SCHOOLGIRL was bullied so horribly over her “bat ears” that she would wet herself in school – and even stopped eating.

Distraught mum Cara Biggs, 41, said kids were so “severely” cruel to her eight-year-old daughter Lillianna that she didn’t want to go to school at all.

Mum-of-five Cara told The Sun Online: “Her ears stick out quite a lot, so if she has her hair down it goes through her hair.

“She was getting bullied severely to the extent where she was wetting herself at school.

“She had to be dragged off of me every day – she just didn’t want to be in school at all.”

Cara says the school has spoken to children and their parents about the malicious behaviour, but they can only do so much to protect little Lillianna.

“At Christmas, there was an elf day where everyone had to dress up as an elf, so I had to keep her off.

“It was just too upsetting for her.”

WETTING HERSELF AT SCHOOL

Lillianna eventually had to bring spare clothes with her into school because she was wetting herself because of the bullying.

Cara and her husband decided to take Lillianna to the doctors to see if there was anything they could do to help.

When the GP asked the schoolgirl how she felt, she said she “didn’t want to be here anymore” and cried as she explained the nastiness of other kids.

The family were hopeful things might improve when Lillianna was referred to see a specialist Ear, Nose and Throat surgeon in Stevenage.

There, consultant Mr Adam Frosh recognised the seriousness of Lillianna’s case and wanted her to have a pinnaplasty – where the ears are pinned back surgically.

Cara says: “Not in front of my daughter, [Frosh] said: ‘They are quite severe and they do need operating on, because what you go through in childhood with goes into adulthood’, and he doesn’t want that for her.”

The surgery was all booked in to go ahead at the end of January – but an Individual Funding Request Panel blocked the operation three times, deeming the procedure unnecessary.

Mr Frosh repeatedly appealed, arguing the surgery has been shown to reduce the bullying kids with bat ears face – but the board kept refusing.

Cara said: “The appeal board was just so inhumane with my daughter. They said that I’m overreacting.

“They said it was a school matter and not an operational matter. The school can only do so much – she has bat ears, they can’t get them corrected for her.

“Myself and Dr Frosh are just disgusted that with the length of time that they’ve put her through, that I’ve had to tell her that the operation was cancelled a couple of days before.

“She stopped eating. That’s how bad it got.”

Cara said Lillianna was crushed by the news the surgery wouldn’t happen.

The schoolgirl blamed herself for the operation not going ahead – and even worried the doctors were laughing at her.

Cara enlisted the help of a Health Visitor to advise how to get Lillianna to eat again while she also stopped wanting to go round to friends’ houses or take part in PE at school.

Then one day, as the battle with the hospital review board raged on, Cara got a call out of the blue from Mr Frosh, who works in One Hatfield Hospital – a private hospital in Hertfordshire.

He was delighted to tell her that his team there were going to do the operation – which would normally cost around £3,500 – completely free of charge.

Cara said: “They are touched by her story.

“Dr Frosh has spent time with Lillianna and seen how the effects on Lillianna have caused her problems at home and in school, and he’s just seen that she’s just a very sad little girl.

“Doctors don’t normally do that.

During her pre-op assessment, Cara said Lillianna was introduced to the staff as their “VIP guest” and they “treated her like a princess”, which made her cry with happiness.

Cara added: “I don’t want any other children to go this because my daughter’s thin anyway, and for her to stop eating it’s quite detrimental for her.”

She’s now booked in to have the surgery in June.

Speaking about the special case, Mr Frosh told Sun Online: “To give you an idea about Lillianna – she is just sweetness itself. I find it hard not to cry when she comes to see me because she’s just so lovely.

“She would be very likely to improve a lot by having the surgery.

“The idea with bat ear surgery is to render them unnoticeable, and that’s going to be the aim with Lillianna.

“There’s a lot of evidence to show that if you perform this operation on children that are bullied, that actually the bullying goes away.

“We carry our childhood into our adult life, and who knows how much this is going to affect her in the long-term.”

WHAT IS ‘BAT EAR’ SURGERY?

Bat ears or ‘prominent ears’ stick out more than usual.

They don’t affect hearing, but can lead to unwanted attention including name-calling and even bullying in children.

Because kids’ ears are close to adult size by the age of six, any perceived abnormality can be more noticeable.

So a ‘pinnaplasty’ operation is used to pin ears back to make the ears less visible.

The operation invovles shaping the cartilage and skin behind the ear to look less prominent.

A surgeon will cut behind the ear and take out a thin sliver of skin.

They’ll also put permanent stitches under the skin when needed.

The whole surgery normally lasts between one and two hours, and does not noramlly require the patient to stay in hospital overnight.

A spokesperson for Bedfordshire CCG said: “Like all NHS organisations, Bedfordshire Clinical Commissioning Group (BCCG) is responsible for using the available resources in the most effective way.

“Whilst we cannot comment directly on individual cases, pinnaplasty is ordinarily considered to be a cosmetic treatment and is therefore not routinely funded.

“Through the individual funding request (IFR) process, cases are considered on the grounds of exceptional health need on a case by case basis.”

Nine-year-old girl hits back at bullies who made her ‘miserable and lonely’ after her new school makes her feel strong, ‘kinda funny’ and like a good friend