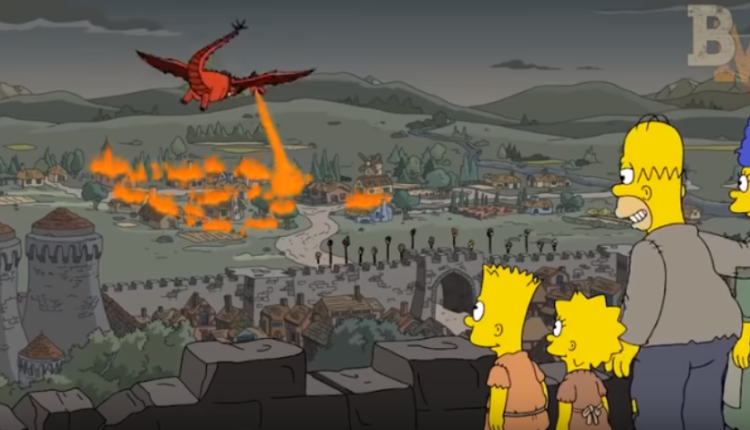 THE destruction of King’s Landing in Game Of Thrones season eight was predicted by The Simpsons two years ago during a special themed episode.

The 2017 episode was titled The Serfsons and saw Homer Simpson and his family take part in a cartoon parody of the HBO show.

During the 2017 show, viewers watched as their favourite characters lived in a medieval Springfield, where show bosses poked fun at the Night King, Jaime and Cersei Lannister’s incestuous relationship and the show’s infamous dragons.

But, the one scene which has caught the attention of hardcore fans of the HBO show is where the famous family watch from the castle walls towards the end of the episode, as a dragon burns down their beloved town in a furious rage.

The scene bares a striking similarity to the shocking events of Monday night’s episode of Game Of Thrones, which saw Daenerys Targaryen raze the city to the ground.

The queen proved fan’s theories that she would turn into a mad queen like her father, as she ignored the bells of surrender and blazed the city – murdering thousands of innocent men, women and children.

And fans can’t believe that the cartoon comedy show has predicted yet another future event- albeit from a TV show.

“Well I be damned they predicted the future again #gameofthrones#GOTS8E5 #simpsons #Daenerys,” commented one fan.

While another said: “Freaky AF how The Simpsons knew about the #MadQueen before everyone else. #GameOfThrones”

A third joked: “Writers at The Simpsons got a crystal ball or something?!?! #gameofthrones #GOTS8E5 #Simpsons”

Meanwhile, the trailer for the final episode of Game Of Thrones has revealed a surprising twist.

Fans of the fantasy epic have long hoped for a final showdown with Daenerys Targaryen fighting for the Iron Throne – but in the aftermath of the fiery Last Battle everything has changed.

Watch the final ever episode of Game of Thrones on Sky Atlantic and Now TV next Monday.