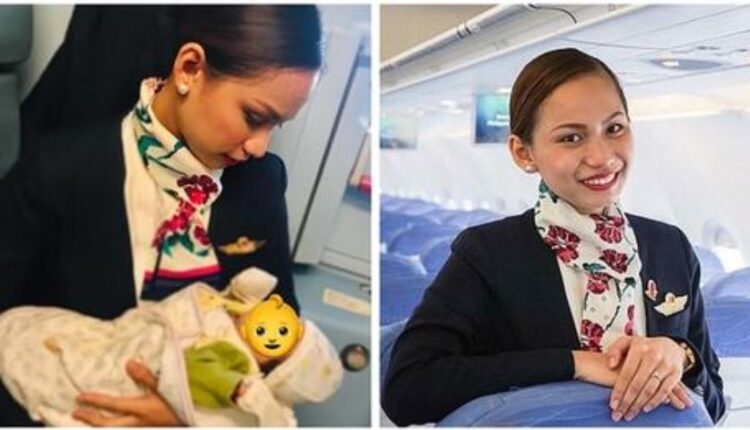 A flight attendant from the Philippines has been praised for helping a mum running out of formula milk by breastfeeding her baby while in the air.

Partisha Organa, now 27, went above and beyond for a passenger when she offered to breastfeed her baby in 2018.

Partisha wrote: “I heard an infant’s cry, a cry that will make you want to do anything to help.
“I approached the mother and asked if everything’s okay, I tried to tell her to feed her hungry child.
“Teary-eyed, she told me she ran out of formula milk. Passengers started looking and staring at the tiny, fragile crying infant.”

According to Patrisha, she felt a pinch in her heart and added: “There’s no formula milk on board. I thought to myself, there’s only one thing I could offer and that’s my own milk. And so I offered.”

Patrisha’s supervisor allowed her and the mum to go to a private part of the plane to breastfeed the baby during domestic Philippine Airlines flight in 2018.
“The baby started rooting, she was so hungry.
“I saw the relief on her mother’s eyes. I continued to feed the baby until she fell asleep. I escorted her back to her seat and just before I left, the mother sincerely thanked me.” She continued.

The female flight attendant said she a breastfeeding advocate and at that time she had a nine-month-old baby girl at home.

Many people on Facebook were quick to praise Patrisha for her selfless act.
One said: “This is amazing! We don’t know why mom ran out.
Another added: “Thank you. I needed to see something beautiful.”
“I’m sure it wasn’t planned. Things happen, and I’m a solution was available and graciously offered.”
One said: “I absolutely love this, I’ve often dreamed of being able to help out with my milk to another mother in need. Your a hero.”