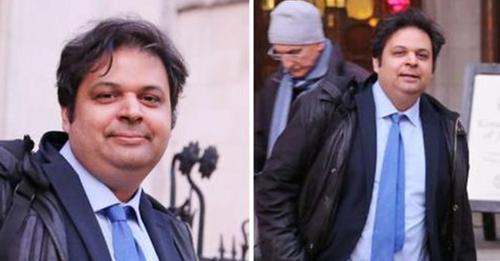 If you are lucky, your parents gave you some sort of allowance while you were growing up. Maybe you had to do it in exchange for chores or maybe not. Either way for most of us, when we reach a point in which we can or our parents ask us to get a job, that money stops. This usually happens sometime in our teenage or young adult years. This 41-year-old man, however, has been relying on his wealthy parents’ handouts for years. They decided to cut him off, so he decided to try and sue them. This is how that went.

41-Year-Old Man Attempted To Sue Wealthy Parents For Cutting Off His Allowance
They say that if you give your children too much without expecting anything in return, you will “spoil” them. Well, this is a prime example of just that. Faiz Siddiqui is a 41-year-old who lives off the money that his wealthy parents, who live in Dubai, give him.

He is an Oxford graduate who trained as a lawyer with a top legal firm in London. Despite this, he is currently unemployed and entirely financially dependent on his parents. They have allowed him to live rent-free in a £1 million apartment in London. They cover his expenses and give him £400 a week (more than $500 US) in spending money. After a recent falling-out, however, his parents have decided that it is high time he defends himself. In response, Siddiqui has attempted to sue them.

The Lawsuit
Siddiqui claimed that the handouts his parents have afforded him over the last 20 years nurtured his dependence on them. He said that by cutting him off, they are therefore leaving the state to have to take care of them. He is consequently suing for maintenance. His lawyer argued that he is entitled to apply for maintenance under the 1989 Children’s Act because of his apparent health issues.

The act says that an adult cannot make a claim if their parents are still living together, however, his lawyers argued that this is discrimination against people whose parents are still married. This, they say, is a human rights violation. His parents, of course, fought the claim. Two judges thew out the case quite quickly upon hearing it.

“What Mr Siddiqui seeks is to foist a relationship of financial dependency on parents who do not wish that relationship to continue,” said their barrister Justin Warshaw. “These long-suffering parents have reached their own view of what is suitable provision for their difficult, demanding and pertinacious 41-year-old son.”

An Unsuccessful Suit
The judge claims that the money and allowances that his parents give him are voluntary. They are in no way legally obliged to provide for their highly qualified adult son.

“Parliament – and Mr. Siddiqui’s parents – do not consider that a child, particularly an adult child, should be able to litigate against their parents where there is a dispute between child and parent as to the level of support offered by the parents,” said Warshaw. “Mr. Siddiqui, wrongly, assumes that he is entitled to provision from his parents as of right. This is wrong.”

Lord Justice Moylan says that granting Siddiqui a win on this case would be a major step in the wrong direction. It would be an invasion of parental rights to privacy and respect for their family life. If he granted this adult child’s case, he would be effectively committing a human rights act against the parents.

Not His First Lawsuit
This is not the first time Siddiqui has tried to sue someone due to what he considers unfair treatment. In 2018, he tried to sue Oxford University for the final grade he received. He ended his studies there with a 2:1 grade, which is equivalent to a B minus in the United States. He said that the grade the school gave him caused him to lose out on millions in earning potential.

Naturally, every judge who saw this case threw it out pretty quickly. They all cited the reason why Siddiqui received the grade he did had nothing to do with the University or the quality of their teaching. Rather, it had to do with his lack of preparation and financial discipline. Hopefully, this second lawsuit loss will make Siddiqui realize that he needs to start picking up after himself.

My boyfriend refuses to divorce his ex unless I pay for it. Is this relationship…

Parents abandon their 3-Day-Old Child, leave her a note…