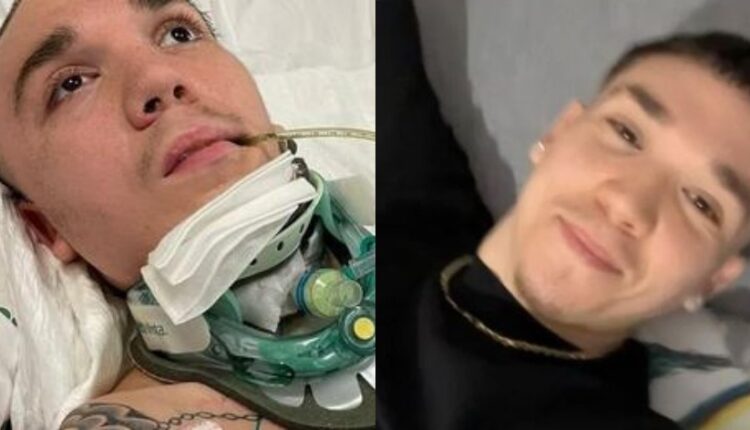 Man, 22, can’t walk or talk after fall during lads’ holiday in Cyprus

A man who cracked his head open after falling from a buggy during a lads’ holiday in Cyprus has been left seriously injured and unable to walk or talk.

Andre Franco, 22, from Camden, remains in Nicosia Hospital, where medics have been treating him for his injuries for the past five weeks.

Andre’s godmother, Susana Costa, said he needs specialist medical aviation to get back to London. Depending on whether Andre recovers enough to be able to sit up for take-off and landing, this could cost anywhere between £15,000 and £32,000,

Andre Franco had rented a buggy with three other friends in the popular tourist town in Cyprus when the life-changing accident happened early in the morning on Saturday, May 21, 2022.

Andre’s mum Isabel Franco, 61, said the lads had been drinking heavily before taking the buggy out at around 6.30am local time. Andre and a friend were both thrown off the back seat when the driver took a bend too fast.

Andre, left, with his mum, Isabel, and his older brother, before the accident

While his friend only suffered scratches from the fall, Andre cracked his head open, bleeding heavily and suffering major swelling to his brain.

Speaking on behalf of Isabel Franco, Andre’s godmother, told MyLondon: “The fine details are still a bit hazy because the boys he was with, they panicked. They were inebriated, as you can imagine at that time in the morning in a place like that… they panicked, because they saw blood, and I think they just freaked out.”

The boys managed to call emergency services straight away, and Andre was rushed to a local hospital then transferred to Nicosia General Hospital the same night. As Andre was taken to hospital, one of the boys called his mum in London to tell her what had happened. Isabel said she was too shocked to speak when she got the call.

Isabel said: “I don’t know the feeling. I think I had no feelings at all because I’m scared to have feelings. I didn’t panic, I was like stuck. I just remember Susana was next to me, and I said, ‘Andre’s had an accident’, and then I passed the phone to her because I couldn’t talk.”

Andre, right, pictured before the accident with his older brother

Isabel and Susana got the earliest flight they could to Ayia Napa along with Andre’s father Carlos, arriving on the Sunday and heading to the hospital first thing on the Monday morning. The women said they were terrified to see Andre after what the doctors had told them.

“What we were told, you start to let your imagination run wild a little bit,” explained Susana. “So we pictured the worse case scenario, obviously, when we got there. We were expecting something horrible.”

Andre’s godmother said she and Isabel were actually relieved to see how “peaceful” Andre looked when they arrived, since he had been sedated.

Andre, who used to part-time in Urban Outfitters and play for Gospel Oak Football Club, has been unable to walk or talk since the accident and has had a series of major operations, including one to remove part of his skull to allow space for his brain to swell without pushing against the bone.

Andre’s friends Daniel and Rhys, who on the holiday but not in the buggy, visiting him in hospital

Andre will need specialist medical aviation to get back to London, which could cost anywhere between £15,000 and £32,000 (

Although the initial shock wasn’t as bad as the two women had expected, it soon dawned on them that Andre might not make a full recovery. “At the moment the doctors are not telling us much because they don’t really know,” said Susana, adding: “At this point it’s touch and go.” She added doctors are being “very reserved” about any prognosis until Andre’s brain swelling has reduced.

But his mum and godmother say they have some cause for hope. Last week Isabel received a call from the hospital to say Andre was becoming more active. “Even though he’s still incubated and on and off he’s animated, moving his legs, arms, his body,” said Susana, “but it’s still early days to know for sure.”

She continued: “We’ve asked him questions, he shakes his head for ‘no’ and nods for ‘yes’. We’ve asked him some random questions, just about us, ‘do you know who we are?’ We make jokes. We’ve seen some expressions in his face which could be classed as a smile I suppose. I don’t know if it’s just wishful thinking or what it is, but he does answer us, yes or no.”

The women call the hospital twice a day for updates, as they are only allowed to visit twice a week. They say the anxiety of waiting between visits is hugely anxiety-inducing. The costs are racking up, too. Isabel and Susana have to pay 50 euro each for a PCR test each time they go to the hospital, and for a cab to get there since public transport in the area is poor.

But these costs are nothing compared to the cost of trying to get Andre home. Isabel has set up a GoFundMe page to help raise the money to get Andre home. She said two of the boys he was on holiday with have been incredibly “distressed and supportive” since the accident, texting her every other day, and one of them has donated a huge sum of money to the page.

“We understand that they are young kids and they do stuff like that,” said Susana, and Isabel added: “We just want to get him home.”