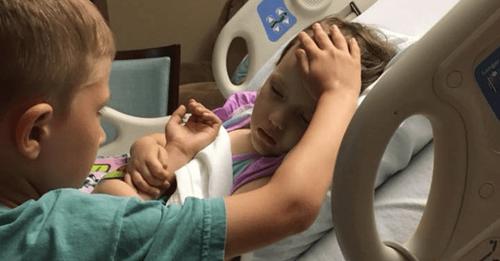 Heartbroken 6-year-old Boy Comforts His Little Sister Before She Breathes Her Last, Making Everyone Cry

A grieving father captured a heartbreaking moment on camera, when he watched his 6-year-old son comfort his 4-year-old daughter in her final moments, as she slowly lost her battle to c.a.nc.er.
Matt Sooter took the touching picture showing his oldest son was stroking his sister Adalynn’s hair as she holds on to her final moments of life, hours before she finally succumbed to her disease.

On Facebook, this father wrote a post as an emotional tribute to his youngest. This post detailed the harrowing experience of having to watch his children say goodbye to each other. “A little boy should not have to say goodbye to his partner in crime, his play mate, his best friend, his little sister. This isn’t how it’s supposed to be. But this is the broken world we live in.”, the man wrote.

Matt revealed that his daughter had deteriorated in the days before the picture was taken. The dad wrote: “Addy’s symptoms have progressed rapidly over the past day and a half,”.
“Yesterday she woke up as her spunky playful self. While we still see short instances of our girl she can no longer eat or swallow without difficulty and she’s sleeping most of the time now and we’ve admitted her into inpatient care. Most likely she doesn’t have much time left.”

Matt urged their loved ones to say their final farewells because the little daughter didn’t have much time left. He shared: “For our family and close friends if you feel you need to tell her goodbye we recommend you contact us and do so soon. Pray for Jackson. He doesn’t want to leave her side and we won’t make him. Pray for us. That we have the right words and can make the necessary arrangements in time.” Hours after her father shared the picture, Addy said goodbye to life at 1:04 AM on June 3, 2018.

Baby Adalynn had been battling her disease for 18 months, ever since doctors discovered a tu.mor growing on her brain stem. The girl was diagnosed with diffuse intrinsic pontine glioma (DPIG), and Jackson had been through her side through it all. Talking about the touching farewell, Matt told People that “It was a sweet moment, but not unexpected. Jackson has always been great with her and took very good care of her. He’s still a happy little boy, but he misses her.”

Matt said, “We miss her terribly, but we’re also at peace knowing we did everything we could to try to help her and that she isn’t in pain anymore. It was only, ‘See you later.’ We’ll see her again some day.” The little girl had been given mere months to live after she was diagnosed on November 12, 2016. However, she exceeded doctors’ expectations by holding on for nearly a year and a half longer.

In fact, Matt and his wife Chandra, were ecstatic when they found out that her tu.mor had started to shrink. In spite of her beating incredible odds, the father was aware of the fact that his daughter’s was a losing battle. “While we’re doing everything we can to change the outcome we don’t expect to win this fight. We haven’t given up, but it seems we are losing the war.”, he told People. The heartbroken father also revealed that the family had come to terms with the fact that they might lose their daughter: “While we don’t look forward to a future without our little girl, we don’t fear it.”