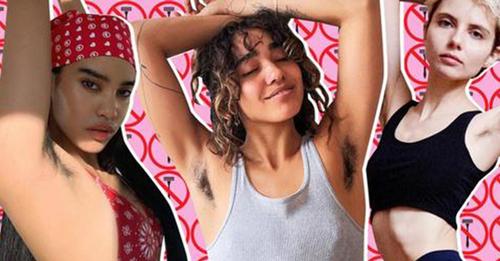 Gen Z gals on growing out their body hair: It’s ‘sexy’ and ‘empowering’

Oh the Gen Z’s, love em’ or hate em’ they are always making the news for their unconventional opinions, mannerisms, and take on the world. If you are a Gen Z, you may even feel exactly the same way as the women in this article, if you aren’t, you likely are about to turn up your nose. Either way, we always applauded women for doing their thing just the way they want to.

It may be thanks to the pandemic and lockdown that has caused women to stop shaving, doing their makeup or even brushing their hair as often. I mean, it makes sense. Why shave your legs when you aren’t going anywhere anyway? Sydney Jordan is a fantastic example of exactly that, the 25-year-old model is not alone on her stance either, which is pretty evident by the views her TikTok video has racked up.

The new movement started by the Gen Z group has gained enormous traction
Not only is it going viral, but the support has been overwhelming. You may have seen the hashtag #bodyhairisnatural floating around. That’s because it’s been used over 95 million times and counting. If you are pro body hair, then you’ll be smiling for sure. Sydney says, however, that her modeling career has been slightly hindered by her refusing to shave. Speaking to the New York Post, the 25-year-old said she just is not willing to shave, it’s all part of her brand. That includes her armpits and her legs. The Gen Z’s agents did warn her this might happen, since the industry she’s in likes smooth, hairless bodies. She says that she doesn’t care.

Things might be looking bleak for Jordyn, but other Gen Z models are saying the opposite. 25-Year-old model Elyanna Sanchez is one of them. And her 93,000 Instagram followers seem to back that statement up. She tells the New York Post that “People never cared if I shaved, It just felt normal [to have body hair].”

Underarm hair is the new norm
Not only is Elyanna being embraced for her body hair but she’s even been featured in Calvin Klein ads flaunting it. It all started out because of her Gen Z confidence. Elyanna said she didn’t shave the day of the shoot because she “didn’t really think about it”, explaining the client had no problem with her au naturel look.

But, even though the model is clearly making a success with her hairy body, she still receives flacks on her Instagram account. “People have said things like: ‘Can you use real models? And then everyone bashes them and calls them ugly.”

As mentioned before, the Gen Z clan who are taking a stand to normalize body hair has resulted in many women from all walks of life taking the same stance. A 29-year-old artist from Brooklyn, Chanté Glover, says that at first, most people were not impressed with her body hair. Now that it’s been a few years, she says she feels empowered for her choice not to shave. People have started to support her and encourage her choices, too.

The Gen Z’s of the world are taking over with their stance on natural body hair
If you needed any more convincing that maybe the Gen Z clan are onto something, another shining example is 28-year-old Virali Patel from London.

“I feel a lot of women are tired of changing themselves in order to fit in society’s definition of beautiful. We’ve been conditioned to believe smooth skin is sexy, and having hair makes us look ‘manly’ and unworthy of love — which just isn’t true.”

And, it does not stop there! 32-year-old sex worker Liara Roux is all for the Gen Z body hair movement. She claims her job is literally to be “hot online” and she still does it even with her fuzzy armpits and all.

“I’ve had some people tell me that they decided to start growing out their body hair after they saw me with it. Because it’s just my job to be naked online and be hot, it sort of gives other people permission to do that … It’s easier for people to be like, ‘Oh, you can still be very attractive to people.’”