Chef returns $1,200 bill of Rich Diner who ‘Disrespected’ his waitress, bans them from restaurant - Daily Net 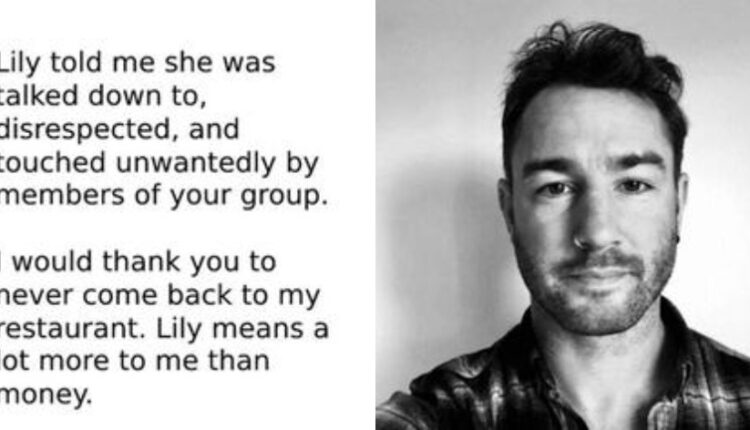 Chef returns $1,200 bill of Rich Diner who ‘Disrespected’ his waitress, bans them from restaurant

When you work in the hospitality industry you end up being part of a special community. Long and late hours often mean you’re spending a lot of your time with your coworkers both at work and when you’re off the clock. Over time, your coworkers can sometimes end up feeling like family. So, when this chef banned a group of customers for being a nuisance- you could say he was well within his rights.

Recently, a British chef asked a group of rich diners to never return to the restaurant. Lee Skeet, the Chef, and owner of Cora Restaurant in Cardiff, Wales, United Kingdom sent an email to a diner which he then shared on Twitter.

The Tweet started by saying, “I just think we should start calling out rich people who think they can treat people like crap.”

Although the diners had racked up an enormous bill, they had also harassed the waitress. To some, this comes as a breath of fresh air. After all the talk of people leaving jobs due to toxic work environments, his devotion to his employees is a pleasant surprise.

I’m not clout chasing or looking for likes.

I just think we should start calling out rich people who think they can treat people like crap pic.twitter.com/sN5wplXDed

The email from the chef read, “Dear xxxx, I wanted to firstly thank you for choosing my restaurant for your meal tonight, and I understand you had the biggest bill we’ve ever had on one table here. Unfortunately throughout the evening, I was made aware that your party’s behavior was inappropriate towards Lily, who runs front-of-house. She has told me that as a 22-year-old-girl she was talked down to, disrespected, and touched unwantedly by members of your group. I have spent the last hour having conversations with her that break my heart, make me feel like a s**t employer, and a terrible dad having my own daughter.

Chef Stands Up For Employee In Cardiff Restaurant
What’s interesting is that Skeet never resorted to personal insults. In fact, the chef asked the diner to provide their bank information so he could refund the £1,000m bill, just minus £100 as the group hadn’t tipped Lily either.

In the end, Skeet asked them never to return here. “Lily means a lot more to me than money. I also think you should assess the people you surround yourself with,” he said.

As things go, Skeet later had a realization about the entire incident. And he decided to transfer the entire amount to Lily’s bank account. “I’m not going to refund the customer’s money. I’ve instead kept it and transferred it to Lily.”

Restaurant Cora, Lee Skeet’s fine dining place, serves only 12 guests per day. But they do serve the best quality seasonal produce that is available every day. So, it can be ascertained that they showcase quality over quantity. The guests in the intimate dining scene are always served a set tasting menu. If one were to remember properly, this chef had previously worked with stalwarts like Gordon Ramsay. Also, he came into the news in 2017[2] when he was almost crushed to death. A lorry that was carrying a crane crushed Skeet’s leg and narrowly missed his son.

A Model Employer: Lee Skeet
Needless to say, Twitter was filled with an outpouring of support for Skeet and Lily. One user commented, “Oh my heart… an employer that just touched my heart. Lee, I don’t know you, may even never get the opportunity to meet you but know the world would have been a better place if all of us could have been like you.”